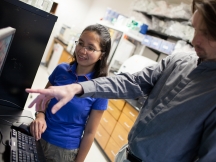 ARDS can be caused by any major direct or indirect injury to the lung. Common causes include:

Depending on the amount of oxygen in the blood and during breathing, the severity of ARDS is classified as:

ARDS leads to a buildup of fluid in the air sacs (alveoli). This fluid prevents enough oxygen from passing into the bloodstream.

The fluid buildup also makes the lungs heavy and stiff. This decreases the lungs' ability to expand. The level of oxygen in the blood can stay dangerously low, even if the person receives oxygen from a breathing machine (ventilator) through a breathing tube (endotracheal tube).

ARDS often occurs along with the failure of other organ systems, such as the liver or kidneys. Cigarette smoking and heavy alcohol use may be risk factors for its development.

Symptoms usually develop within 24 to 48 hours of the injury or illness. Often, people with ARDS are so sick they cannot complain of symptoms. Symptoms can include any of the following:

Listening to the chest with a stethoscope (auscultation) reveals abnormal breath sounds, such as crackles, which may be signs of fluid in the lungs. Often, blood pressure is low. Cyanosis (blue skin, lips, and nails caused by lack of oxygen to the tissues) is often seen.

Tests used to diagnose ARDS include:

An echocardiogram may be needed to rule out heart failure, which can look similar to ARDS on a chest x-ray.

ARDS often needs to be treated in an intensive care unit (ICU).

The goal of treatment is to provide breathing support and treat the cause of ARDS. This may involve medicines to treat infections, reduce inflammation, and remove fluid from the lungs.

A ventilator is used to deliver high doses of oxygen and positive pressure to the damaged lungs. People often need to be deeply sedated with medicines. During treatment, health care providers make every effort to protect the lungs from further damage. Treatment is mainly supportive until the lungs recover.

Sometimes, a treatment called extracorporeal membrane oxygenation (ECMO) is done. During ECMO, blood is filtered through a machine to provide oxygen and remove carbon dioxide.

Many family members of people with ARDS are under extreme stress. They can often relieve this stress by joining support groups where members share common experiences and problems.

About one third of people with ARDS die of the disease. Those who live often get back most of their normal lung function, but many people have permanent (usually mild) lung damage.

Many people who survive ARDS have memory loss or other quality-of-life problems after they recover. This is due to brain damage that occurred when the lungs were not working properly and the brain was not getting enough oxygen. Some people can also have post-traumatic stress after surviving ARDS.

Problems that may result from ARDS or its treatment include:

ARDS most often occurs during another illness, for which the person is already in the hospital. In some cases, a healthy person has severe pneumonia that gets worse and becomes ARDS. If you have trouble breathing, call your local emergency number (such as 911) or go to the emergency room.