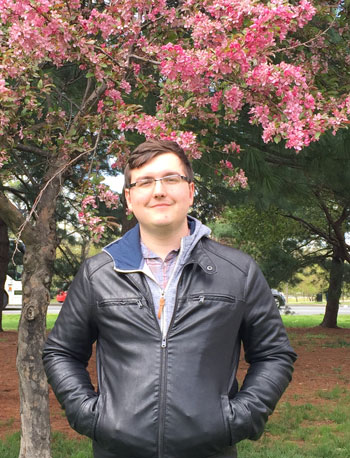 Brett Palaschak seems like your average 25-year-old guy, and in most ways he is. He is a graduate of the University of Florida, is active in his community and enjoys playing video games in his leisure time.

However, Brett’s medical ID necklace, which he wears every day, is a constant reminder of his disorder. It could be the difference between life and death.

“If I am ever in an emergency situation and a medical professional needs to take me to a hospital, my necklace lets them know I have a severe bleeding disorder,” he said.

Brett was just 3 days old when he was diagnosed with hemophilia A, a recessive disorder caused by a deficiency in a clotting protein, known as clotting factor VIII. The disease, which is most common in males, occurs in one out of every 5,000 live births.

To cope with his disorder, Brett must inject medication into his vein for a period of 10 minutes, three times a week. This process, called factor replacement therapy, is the most common type of hemophilia treatment. However, it comes at a steep cost. With each unit costing approximately $1, patients are often obliged to spend hundreds of thousands of dollars in medication per year.

Fortunately, Brett does not let his disorder define him. Instead, he uses his story as a platform to raise awareness and advocate for the advancement of health care for hemophiliacs. He is involved with several state organizations, including the Hemophilia Foundation of Greater Florida and the Bleeding Disorder Coalition of Florida, or BDCF.

“A lot of my spare time is devoted to volunteering in the community, trying to advocate for people like me who need access to resources such as health insurance,” said Brett. “Being a co-chair of the BDCF is fulfilling because it’s just another way I can contribute to the welfare of the bleeding disorder community.”

Over the last few years, Brett has also developed a passion for research through his work in the Roland Herzog Laboratory at the UF Genetics Institute. Now working as a biological scientist, his research goes directly into developing a treatment for hemophilia through gene therapy.

“I remember Brett when he was a patient in my pediatric hemophilia clinic,” said pediatric hematologist Tung Wynn, M.D. “He was always a very bright person, and his parents were great advocates for him. They made sure that he was well-informed about his hemophilia, and as he got older, they were proactive about making sure he was participating in his own health care and ready to transition into adulthood as he prepared to leave for college.”

Wynn said Brett wanted to study as a medical student when he came to UF but discovered that his real love was in the advocacy for the community and in doing the research to develop better treatments and a cure for hemophilia.

Brett says his research has the potential to help not only those in the United States, but also those with hemophilia in other parts of the world where there is limited access to health care.

“There’s a global initiative to help people with hemophilia who either don’t have access to medications and treatment or can’t afford it,” said Brett. He added that gene therapy could be an important step toward driving down the price of medication.

“Brett is an inspiration for our current patients to show them that the transition process can happen successfully and that hemophilia doesn’t have to hold them back from aspiring to be whatever they want to become,” said Wynn. “I couldn’t be any more proud of him and what he has accomplished so far in his life. It has been great working with him to advocate for the hemophilia community.”

During the month of March, Brett is one of many people celebrating the second-ever Bleeding Disorder Awareness Month, which was created as an extension of Hemophilia Awareness Month. The month aims to create a strong sense of unity among individuals with bleeding disorders and increase community awareness and engagement. Brett hopes that his efforts, along with the efforts of others, will help deepen the public’s understanding of hemophilia and other rare bleeding disorders.

“I want to show others that people like me are important and deserving of having the chance to contribute to society,” said Brett.