For the latest updates on closures or modified hours for our UF Health clinical facilities, please click: END_OF_DOCUMENT_TOKEN_TO_BE_REPLACED

Call Everyone: Bobby's Journey with CHD

Robert “Bobby” Murray, 34, was born in Hollywood, Florida on Jan. 23, 1985 – during a decade in which long-term survival into adulthood for a person with congenital heart disease was grim. He had two rare heart defects present at birth: tricuspid atresia, a heart valve defect that blocks blood flow; and transposition of the great arteries, meaning the two arteries leaving the heart are reversed.

Bobby underwent his first surgery just before turning 2 years old and another at 15 years old to palliate his complex heart condition with a Fontan operation, a complex procedure to bypass his missing right heart to provide pulmonary blood flow. But, thereafter, Bobby’s life felt seemingly normal for over a decade.

In 2007, Bobby’s left arm went numb. Bobby’s mother, a nurse practitioner, urged him to go the emergency room when doctors discovered blood clots had lodged in his left arm. Bobby underwent surgery to remove the clots, but two years later he had clots in his right arm. The clots, formed because of a dilated Fontan baffle, had Bobby and his mother traveling for care from South Florida to Orlando, from one opinion to the next. In 2010, Bobby had an additional operation to revise his Fontan to an extra-cardiac conduit.

But heart trouble found Bobby again, this time in 2012. He needed a pacemaker implant through open chest surgery to help control his heart rhythm. Bobby’s sternal precautions, which typically includes avoiding any significant weight lifting for eight weeks after surgery, were removed just in time for him to hold his first child, Skyler.
Over the next three years, Bobby experienced chest pains, constant fatigue and vomiting – he was in heart failure. 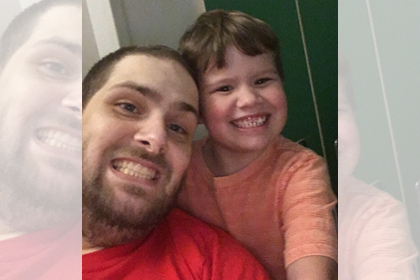 Bobby and his mother traveled to Gainesville, Florida in December of 2015 for a series of tests, including a liver biopsy, a cardiac catheterization, bloodwork and a cardio-pulmonary stress test.

“After all the tests were done they said, ‘You need a heart transplant,’” Bobby recalled.

Overwhelmed and overcome with emotions, Bobby and his mother drove back home to celebrate Christmas, New Year’s and his birthday with his son, who was now 3 years old. On Feb. 24, 2016, Bobby was admitted to UF Health Shands Hospital to wait for his heart.

“It was a mental battle,” Bobby said.

He would spend the next 14 months at the hospital under the care of Moguillansky on two potent IV medications given to temporarily improve cardiac function while waiting for a heart. While in the hospital, he would see his family every other week and the cardiology unit nursing staff became his extended family.

Donor hearts came and went, but none were the perfect match for Bobby.

Until one night in March.

Bobby, who had become close friends with Jonathan, thought it was a prank. But Jonathan urged Bobby to take the call – this was it.

“Diego said, ‘I think we have a heart for you. We have to make sure we have everything you need so don’t tell anyone yet,” Bobby said.

Bobby, alone at the hospital, called his mother. His father. His brother. His son’s mother. Then, he made if Facebook official.

“My phone wouldn’t stop going off as I was getting ready for surgery,” Bobby said.

As vials of blood were drawn for testing and Bobby was prepped for surgery, his mother turned her four-hour commute to Gainesville into a two-and-a-half hour drive. Just in the nick of time, Bobby’s mother arrived, exiting the elevator as her son was wheeled off to surgery.

Mark Bleiweis, M.D., director of the UF Health Congenital Heart Center and chief of congenital cardiothoracic surgery, and his team performed the eight-hour surgery on March 16, 2017, now affectionately known as Bobby’s “heartiversary,” a celebration of his transplant anniversary date.

Bobby recovered in the UF Health Congenital Heart Center’s intensive care unit for nearly 10 days and was under the care of Moguillansky shortly after surgery.

“Dr. Moguillansky has great bedside manner,” Bobby said. “He’s honest, and I value honesty over everything else.”

Bobby spent nearly three weeks in Unit 54 where they observed him for rejection, a complication that can arise because of a transplant. Before being discharged to go home, Bobby would need to stay one month in temporary housing nearby for additional observation.

On April 7, 2017, Bobby packed his bags and left around 9 p.m. to surprise Skyler, who thought was coming home the following day.