For more information on our ongoing response to COVID-19 in Gainesville, Jacksonville and Central Florida, visit our coronavirus website. END_OF_DOCUMENT_TOKEN_TO_BE_REPLACED

In September 2018, David Walther traveled from The Florida Panhandle to Arizona for another shot at adventure. The 62-year-old high school economics teacher from Jay, Florida was looking to complete a rim-to-rim hike at the Grand Canyon in just a single day.

David had conquered the 21-mile hike four times before, and he had logged numerous hours of training in preparation for this latest trek. But this time, something wasn’t right. The day before the hike, David felt severe head pain. He had been experiencing bad headaches for the past few weeks, but this time, the pain was almost unbearable. 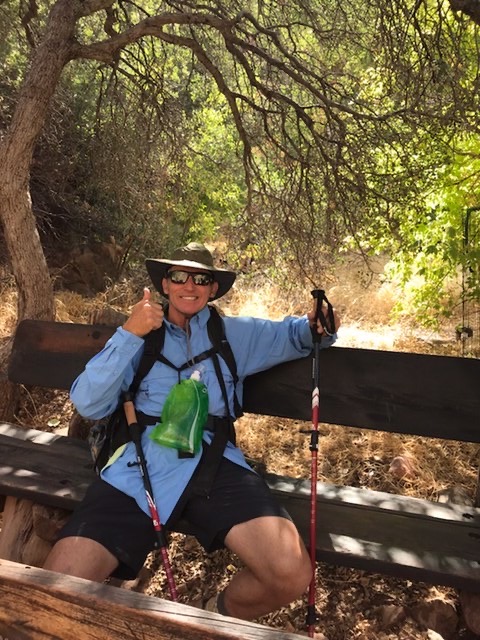 He knew he needed medical care, and with the help of three fellow teachers he traveled with, David went to an urgent care facility in Page, Arizona. An initial diagnosis suggested cancer, and David immediately booked a flight back to Florida.

At a hospital in Pensacola, David underwent an MRI that confirmed he had a glioblastoma, a type of tumor that can occur in the brain or spinal cord. Headaches are one of the most common symptoms of a glioblastoma because as the tumor grows, it increases pressure on the skull and the brain.
David was advised to seek care at UF Health, so he and his wife made the five-hour drive to Gainesville. On Sept. 11, 2018, David underwent surgery performed by UF Health neurosurgeon, Maryam Rahman, M.D., an assistant professor in the UF College of Medicine’s department of neurosurgery.

Following the surgery, David immediately began six weeks of radiation and chemotherapy treatment. He said the positivity and care from radiation oncologist Robert J. Amdur, M.D., a radiation therapy professor in the UF College of Medicine, and his medical oncologist Ashley Ghiaseddin, M.D., made a world difference.

“I had such positive experiences at UF Health,” David said. “There are always a great group of people around who look after me tremendously.”
David quickly returned to work and finished out the school year in December, just under three months following his surgery. This August, the beloved Pace High School teacher entered his 41st year of teaching.

Determined to make that fifth hike, David created his own workout routine. He did a mix of activities, including running the bleachers, bike riding and lifting weights. Periodically, he returns to Gainesville for a medical appointment and when he does, he typically heads to Ben Hill Griffin Stadium for some exercise.

“I know I’m not back at 100%,” David said, “but I’m pretty close. It’s been an emotional time for me to be surrounded by loved ones as I try to redeem myself and complete what I had hoped to do last year.” And this past September, David returned to Arizona for some unfinished business. Accompanied by his wife, two daughters, granddaughters, and former students – and with the assistance of UF Health helping his every step – David completed hike No. 5 through the Grand Canyon.

Peyton Thomas is a fourth-year public relations major with a concentration in business. She is also pursuing a combined master's degree in digital strategy. Peyton is from Vienna, VA, where... END_OF_DOCUMENT_TOKEN_TO_BE_REPLACED