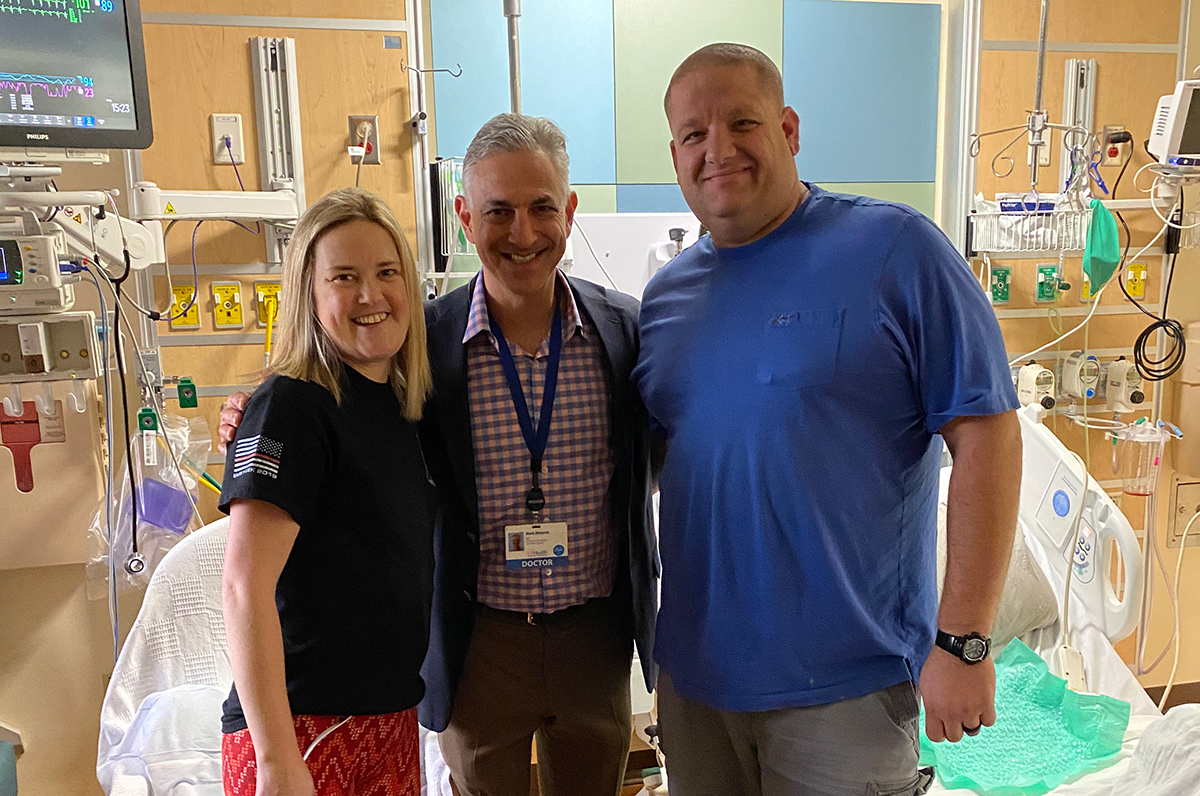 Heather Lowery’s parents were told that she would likely not live to be 3 months old. At 36, Heather has proved them wrong and has set an example for adults living with congenital heart disease.

At 8 months pregnant, Heather’s mother learned from physicians that Heather’s heart was not developing correctly. When she was born at UF Health Shands Hospital on July 9, 1983, her heart rate, which should have been between 150 and 160, measured at 60 beats per minute. Doctors discovered that the baby from Starke was born with congenitally corrected transposition of the great arteries, a complex defect where the heart’s two ventricles along with the two great arteries are reversed.

She was observed and recovered in the neonatal intensive care unit for her first two weeks of life and, at 3 months old, underwent her first of 20 pacemaker-related procedures.

At around age 4 or 5, Heather started to see Jay Fricker, M.D., pediatric cardiologist at the UF Health Congenital Heart Center.

“We’re like family, we’ve been part of each other’s lives for so long,” Heather recalled. “He’s like another dad to me.”

At 9 years old, Heather underwent her first open-heart surgery to try and establish a normal blood flow pattern through her heart.

But despite the number of doctor visits, multiple surgeries and inpatient stays, Heather fondly remembers having a relatively normal life growing up. And while she was looked out for by those around her, including a school bus driver who would always urge her to sit at the front of the bus, Heather was determined to not let her disease define or stop her. As a student at Bradford High School, she even served on her color guard team and on her cheer squad.

Just as Heather entered adulthood at 18, doctors recommended that she have a second open-heart surgery to replace a heart valve. Heather was given the option of a pig valve, which would allow her to get through her child bearing years with the possibility of conceiving, but would likely require replacement in 10 to 15 years, or to have a mechanical valve which would complicate her having children because of the need for blood thinning medication. But when surgeons went to operate, they noticed that Heather’s valve could potentially be repaired without the need for a valve replacement.

Over the next 15 years, Heather married her husband, Ryan, a firefighter, and together they adopted a daughter, Emma.

But in 2018, Heather noticed a decline in her health. Fricker discussed with her and Ryan the option of a heart transplant.

“It scared me to death,” Heather said. “It went from scary to really scary.”

Heather underwent a transplant evaluation over several months, and was also transitioned from pediatric to adult cardiology care during that time.

In early 2019, Heather experienced outward signs of heart failure with her body retaining too much fluid and her feeling constantly short of breath. She was admitted to UF Health Heart & Vascular Hospital on multiple occasions.

Heather was seen by Philip Chang, M.D., director of the pediatric and congenital heart electrophysiology program at the UF Health Congenital Heart Center. Chang monitored her heart’s electrical wiring, including her pacemaker.

On May 31, 2019, Heather underwent a complex procedure with Chang to change her existing pacemaker to a combined implantable cardioverter-defibrillator and cardiac resynchronization pacemaker device to protect her in the event of life-threatening arrhythmias, which heart failure patients can be at risk for, and to try to improve her heart failure.

During her hospital stay after the device was implanted, Diego Moguillansky, M.D., M.S., co-director for the adult congenital cardiology program at the UF Health Congenital Heart Center, cared for Heather and gained a deeper understanding of her medical history.

Despite the change in her cardiac device and very close attention to her medication doses, Heather continued to retain fluid. Gaining even three pounds over one night triggered discomfort, and resulted in swelling in her face, neck and chest. Moguillansky strongly recommended a third open-heart surgery to replace a leaky valve that was likely contributing significantly to her heart failure and could not be adequately addressed with medications alone.

“My husband and I talked about it, prayed about it, and, just before the holidays last year, decided to go through with the surgery,” Heather said.

“We love him. He’s one of the best, stand up guys I’ve ever seen,” Heather said. “He doesn’t make you feel rushed or make you feel like he’s not listening. He is a phenomenal guy.”

Heather stayed in the pediatric cardiac intensive care unit for nine days and was attended to by multiple nurses; intensive care unit physicians; Jana Reid, APRN, a member of the adult congenital cardiology team; Moguillansky and Bleiweis. Together, they monitored Heather’s vitals and encouraged her throughout recovery.

“My hope and prayer is that I won’t have any fluid buildup, and I’ll be able to not be short of breath,” Heather said.

Only time will tell if Heather will need a heart transplant, the next step that would need to be taken if she continues to experience symptoms of heart failure.

As a volunteer at her daughter’s school, Heather enjoys watching her daughter attempt to ride a tricycle every Thursday. One day, she hopes to ride alongside her.

“I live each day like it’s my last and one day at a time,” Heather said.