Janis and Janet: The Twins Who Tamed Tremor at UF Health

By the time Janet Plum makes the short but taxing trip to serve the coffee, the mug is only half full. What’s missing of the morning brew is dotted on the floor behind her in a trail that traces back to the pot on the kitchen counter.

For Janet, 78, the uncontrollable shaking was causing her frustration to boil over. The only silver lining was that her identical twin sister, Janis Mason, had already been experiencing the same thing, which she expected before giving her a call.

“We’re very close. It’s like ESP. If something happens to her, it happens to me,” Janet said. “Every time we have a problem or something, we’d call each other. I said, ‘I have this shaking in my hands and my head bobs, and I don’t know why. There’s something wrong.’”

In the past, the twins experienced other conditions simultaneously: frozen shoulder, foot spurs and migraines, to name a few. It was no different this time as they were both diagnosed with essential tremor, a neurological disorder that primarily affects the upper extremities and occurs during action or movement.

After a few years living apart in different states, they now reside in Melbourne, Florida, where each of them serves as a mirror as to what their condition looks like.

“In the case of Janis and Janet, we had never met a pair of identical twins before with essential tremor, but they both had very similar presentation,” said Justin Hilliard, MD, their neurosurgeon. “They had developed tremor about 30 or 40 years prior to when I had met them, and it progressively worsened over their lifetime.”

As it became increasingly difficult for the sisters to put on makeup, draw, cook, eat and use a computer, it also got harder to hide their tears.

“We have our closet moments where we do that,” Janis said. “We try not to let anybody see or show it. We try to be happy, but sometimes you can’t, so you just go into a closet and cry and then you come back out and put a happy face back on.”

Still, the condition had no chance of hiding the twins’ towering personalities.

Janet and Janis were born five minutes apart in McMinnville, Tennessee, in 1943. While the two have unwillingly shared many medical hardships, they’ve also willingly shared a wealth of happy times.

“Hopscotch, swimming, we played accordions in band,” said Janet, before turning to her older sister for help. “Well, we peed in my father’s army helmet,” Janis said as they both broke out in laughter.

They haven’t always shared everything, though. Janet still jokingly holds a grudge against Janis from their time in the womb for “taking” all her food and causing her to be underweight, which kept her in the hospital for an extra month.

“Boy, you’re really offended by that, aren’t ya?” Janis said, as they both cracked up. 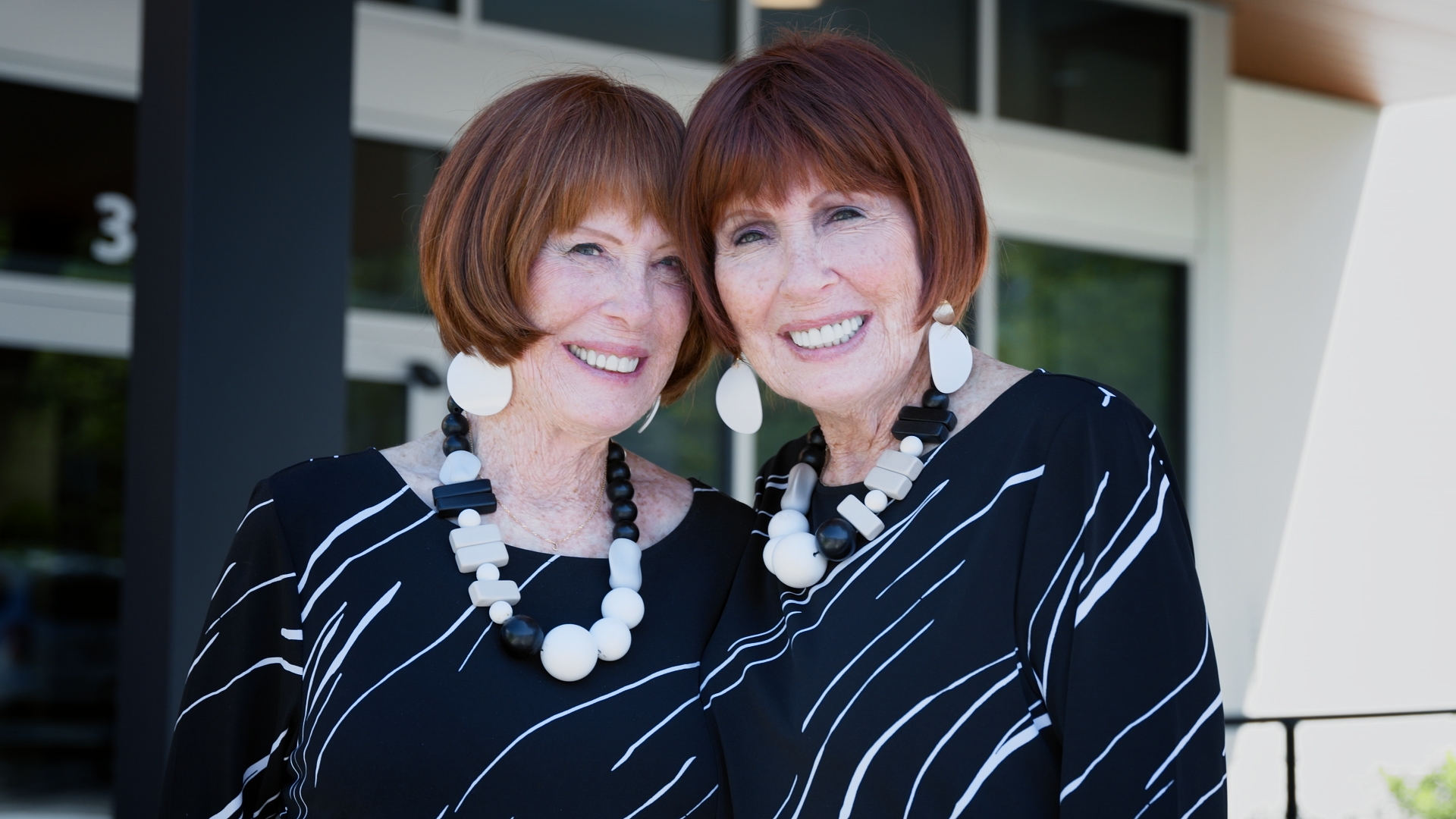 They couldn’t help but share the same genes, and essential tremor is sometimes hereditary. In the twins’ case, it runs on both sides of their family.

“Well, at first when I heard about essential tremor, I said, ‘What is so essential about a tremor?’ Janis said in jest. “I found out my family’s generation had something to do with it. Now, I remember all my uncles shaking, their hands and their bodies, especially their hands.”

“There are many reasons that a person could develop tremor during their lifetime, one of which is Parkinson’s disease, which manifests itself as a resting tremor, a tremor that occurs when the hands are not in motion,” Hilliard said. “But actually the most common neurological reason to have a tremor is because of essential tremor, which manifests itself by a tremor during action or during an intentional movement.”

Hilliard discussed the option of deep brain stimulation, or DBS, with Janis and Janet. The twins had tried to medically manage the tremor, but it progressed and left them with a tough choice to make.

“We were kind of hesitant to go through the surgery and everything,” Janet said. “At our age, we didn’t know.”

The best friends eventually decided to do it together, just like they did for most things. First up to have the surgery would be Janis, or “Big Red” as Hilliard came to know her.

“She says she always goes first.”

Janet Romrell, a physician assistant at the Norman Fixel Institute for Neurological Diseases at UF Health, can recall the exact day she met Janet and Janis. She chuckles as she says the “27th of January.”

“It’s hard to forget,” Romrell said. “They are very charismatic. They have great personalities. I met Janis first. She was wearing a hat, was dressed beautifully, had an interesting statement necklace on and her hat with a flower in it.”

Janis had her first surgery in November 2021, and her hat would be replaced with the crown that DBS patients are fitted with. Janis got a crack out of doing the royal wave at those in the room while wearing it.

To Janis’ surprise, the UF Health team members shared her sense of fun.

“When I went in for the surgery, there was this whole room of doctors and staff, everybody laughing,” Janis said. “I mean, they made me feel so comfortable when I was going to (have the operation).”

“It was like being at a party,” said Janet, who had her first surgery a month later.

DBS was approved for treating essential tremor in 1997, the first movement disorder to gain that approval. To determine if they were good candidates for the procedure, the twins went through a thorough evaluation, which included walking tests and cognitive tests. Janet and Janis were ideal from the start because they had tried medical management and yet the tremor was still profound and impacting their quality of life.

UF Health neurologists’ first goal is to use brain mapping to find the most appropriate location to place the DBS lead with millimeter accuracy, and that’s done using the halo or “crown” that made Janis feel like a queen.

All of this occurs while the patient is awake.

“The reason to do this is because we can get instantaneous feedback about the location of the lead and the effects the stimulation is having to confirm we’re in the optimal location,” Hilliard said.

Under the skin’s surface, a wire connects the lead to an impulse generator implanted in the upper chest to send continuous electrical pulses to block the tremors, acting much like a pacemaker does for those with heart rhythm disorders.

The generator, or “Scooter” as Janis calls it, can be controlled remotely.

Michael Okun, MD, chair of the UF Department of Neurology and executive director of the Fixel Institute, has played an essential role in some of the pioneering studies related to DBS. He says the identical twins pose a scientifically challenging mystery as to why both have the disorder, while it typically manifests in only one in a set of twins.

It may be a while before that question is solved, but Okun finds it gratifying that patients now accept DBS as an answer to treat their condition. Janis herself was evaluated for DBS in 2009 but was scared and chose not to. Okun said the experience physicians now have, along with technological advances and published papers telling other doctors how to conduct it safely, has made patients more comfortable with DBS treatment.

“Many therapies take years to be adopted, but now this one has reached the level where we can be really proud from doing it in the days where people were like, ‘Whoa, whoa, whoa. Don’t touch my brain with any of these types of devices’ to now people begging us, and we actually have to turn people away because maybe it isn’t in their best interest to have the surgery.”

Asked how quickly they saw results, the twins chimed in to say “right away” in unison, of course. Before they even left the operating room, the UF Health team tweaked the settings of their impulse generators numerous times, gauging the effects by how well they could draw circles, but more importantly, write their names legibly.

That’s something Janis hadn’t been able to do in 20 years. For Janet, it had been 15. This made the two more emotional than anything else.

“That was the icing on the cake. It was wonderful. You just don’t know how wonderful it was. We can put on our makeup!” Janet suddenly remembered. “And I can do it in five minutes instead of an hour!”

Janis was free to go back to working with stained glass. She could paint and bake cookies without getting flour everywhere.

Janet could go back to drinking without a straw. She could write birthday cards and Christmas cards again. She plans to write a thank you card to Hilliard, their “hero.”

“They brought me back to see her, and I cried myself because she was so stable,” said Pat Murphy, Janet’s significant other. “It was as near as I’ve seen in my life to a miracle. She’s kind of adapting to it still. She’s not realizing all the things she can do.”

Those improvements will keep coming as unexpected gifts for the twins, whose lives had been limited by tremor for decades. One thing Janet does know is her mug-half-empty days are done.

“Now she comes with one hand, brings the mug and sits it down,” Murphy said. “And I call her a showoff now. And she just loves doing it.”

Talal Elmasry, born and raised in Gainesville, is a graduate of UF’s College of Journalism and Communications. He joined UF Health’s marketing team after 15 years in journalism, including a... END_OF_DOCUMENT_TOKEN_TO_BE_REPLACED