For more information on our ongoing response to COVID-19 in Gainesville, Jacksonville and Central Florida, visit our coronavirus website. END_OF_DOCUMENT_TOKEN_TO_BE_REPLACED

Living With a Great Hope 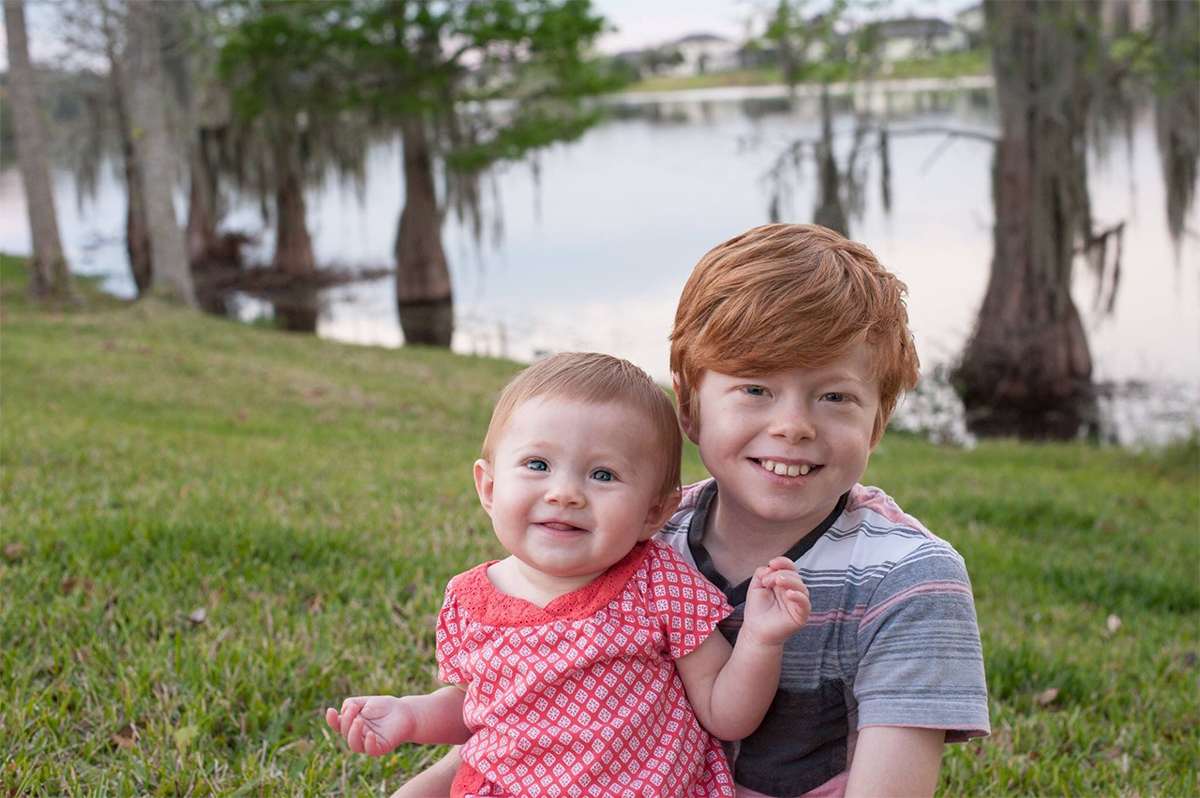 Dawn Strickland describes her four children as any doting parent would. Jonah, the oldest, is 16 and a wonderful helper. Joel, 14, is the sweetest boy. Nine-year-old Grace, the little athlete, is simply wonderful, and 2-year-old Hannah is a little ball of life.

“I have never in my life seen a child with more personality,” Dawn said of Hannah. “She has all that just stuck in that tiny, little body of hers.”

What Dawn doesn’t mention in describing her four children is that both Joel and Hannah have a rare, and life-threatening, genetic, metabolic disease called cystinosis.

The rare lysosomal storage disorder causes the amino acid cystine to accumulate in many organs of the body, including the kidneys, eyes and liver. Often diagnosed before the age of 2, children with the disease typically experience excessive thirst and frequent urination, as well as sensitivity to light caused by cystine crystals that develop behind their corneas.

This frequent urination is one of the greatest challenges for Dawn and her husband Travis. Hannah doesn’t sleep through the night because she wakes up every hour-and-a-half incredibly thirsty, meaning Dawn doesn’t sleep, either.

“She wakes up and gets anywhere from 12 to 14 diapers every day,” Dawn said. “I’m constantly changing her. She uses at least five diapers every night and gets up for five to six drinks of water. We don’t sleep longer than two hours at a time.”

This frequent urination results in loss of minerals, which are typically absorbed by the kidneys. In children with cystinosis, this lack of nutrients causes kidney failure to occur very early in life, meaning early intervention is imperative to patient success.

The couple did not have that early identification with Joel and searched for over two years for a diagnosis for him.

“Very early on, he was very sickly,” Dawn said. “When I tried to nurse him, he wouldn’t latch on.”

Dawn’s physicians in her hometown of Niceville, Florida, suspected tongue-tie as the reason Joel was struggling to breastfeed. But after a procedure to relieve it, nothing got better.

“As time went on, he was just getting sicker,” Dawn said. “We took him to several local doctors and that was his first admission to the hospital. I’d say he was around 18 months or so.”

Joel spent two weeks in the hospital. After receiving no diagnosis, Dawn took her son to another local facility where his symptoms were treated for seven months. Still, no one had any answers to the question of what could be causing them.

“They were treating him from a working diagnosis, which meant they had no clue,” Dawn said. “Looking back, I would have chosen UF Health from the get-go.”

When Joel was 2 years old, the Stricklands tried again to find a diagnosis, but the out-of-town hospital they went to had no appointments available in the timeframe the family needed.

“At this point, he was vomiting 10 to 12 times a day and not keeping any food down,” Dawn said. “He probably only weighed 17 or 18 pounds. To say it was a nightmare was really an understatement.”

Dawn took Joel to the emergency room, where he was denied admission as a non-emergent case. Overcome by concern for her son, Dawn refused to leave the ER until staff scheduled an appointment for Joel.

“Miraculously, they got me an appointment the next day,” she said. “I was so desperate at that point, I didn’t care if the police took me away.”

Finally, Dawn got the answer she’d been searching for, as the doctor asked, “Have you ever heard of cystinosis?”

Incredibly, Dawn had. She had mentioned cystinosis as a potential diagnosis with previous doctors.

“I had asked,’’ she said. “I had asked the so-called experts at the other hospitals. And everybody just laughed at me and said that’s so rare, and you don’t really know what you’re talking about. I felt like somebody had punched me in the gut.”

Soon after, an ophthalmologist identified crystals on the back of Joel’s corneas. Bloodwork came back confirming a diagnosis of cystinosis.

“As upsetting as it was, it was also a huge relief thinking that we finally had some answers,” Dawn said.

When Grace was born, she didn’t show any signs of the disease, and, seven years later, Hannah didn’t, either. Hannah was eating well and gaining weight. She wasn’t overly fussy, but Dawn’s motherly intuition kicked in and she felt something was different than it had been with Grace.

“I had to ask the nephrologist twice to have her tested, and he was shocked when it came back that she had it,” Dawn said.

Cystine levels typically should be below 0.2, but Hannah’s cystine level at 5 months old was nine, confirming the cystinosis diagnosis.

Hannah and Joel both have G-tubes for easier ingestion of the many medications that keep them alive, but both struggle with eating because of side effects. Hannah goes to occupational therapy to improve her eating as she’s not often hungry and, when she is, she often chews her food and then spits it out.

“Sometimes she says her tummy hurts a lot and I know it’s from the medicine and she’ll complain,” Dawn said. “You’ll just have to stop what you’re doing and hold her.”

In 2018, the Stricklands faced the inevitable as Joel’s creatinine levels began to drop, alerting to his doctors that he was entering end-stage kidney failure.

Joel would need a kidney transplant, and the parents decided he should have it at UF Health. There, Joel had a team of nephrologists and transplant surgeons, led by Kiran Upadhyay, M.D., working to ensure the surgery was successful.

Before Joel could receive a new kidney, the family had to consider the source of the donation: a family member or a deceased donor.

“Joel made the decision,” Dawn said. “My husband I were willing to donate to him, but he was really adamant that he didn’t want a kidney from a family member. I was super uncomfortable with his decision, and I’d even lost a bunch of weight so I could be donor. But with everything he’s been through, we wanted him to have some sense of control.”

In March of 2018, Joel was placed on the deceased donors list, and on June 7 his family received the call that a kidney was available.

After the successful surgery, his family stayed in the Pediatric Intensive Care Unit and then moved down to the transplant floor. The whole experience, Dawn said, was eased greatly by UF Health’s nursing staff.

“Every time we’re at UF Health, the nurses make everything just amazing,” Dawn said. “Of course I know the doctors are good. We wouldn’t have come here if they weren’t, but nurses really make or break the stay. We have not had a bad nurse, and some have kind of become our friends around this. They’ve become kind of like family.”

Today, Joel goes to check-ups just about every week to see doctors and get his blood drawn as his team keeps a very watchful eye on his levels and well-being. He makes sure to have his medications everywhere he goes, as to not forget an all-important dose.

Dawn spends time home-schooling and taking care of her children. In her few free hours, she advocates for funding of cystinosis research.

“The majority of the medications that have been made have been created because the community banded together and raised the money collectively,” she said. “We’re a very small community, but we’re very, very strong.”

This dedication has helped researchers make tremendous strides. The disease has recently been cured in mice, leading Dawn to hope that a cure in humans will be discovered in time to help her children.

“If I can prevent one family from having to experience that two-year stretch of not knowing that I went through with Joel, then it’s absolutely worth my time to tell our little story,” Dawn said.

She carries one word with her every day throughout her most difficult moments caring for Joel and Hannah: hope.

“We’ll have a new family that pops into our online support group every once and awhile,” Dawn said. “It makes me emotional to think about, but I just want to tell them that if I can do this, you can. Although we’re very aware of the medical challenges we face as a family, we are so much more than ok. We live with a great hope & a lot of that is due to all of the talented & dedicated professionals at UF Health.”

Sofia DiMartino is a Marketing Intern with UF Health Communications and a third-year public relations major with a concentration in business at the University of Florida. She is a part... END_OF_DOCUMENT_TOKEN_TO_BE_REPLACED