The best way to prevent the spread of COVID-19 is to get vaccinated. You can get a vaccine in many places in your community. Find a walk-up location or schedule an appointment today. END_OF_DOCUMENT_TOKEN_TO_BE_REPLACED

Living a normal life with a rare form of glioblastoma

One day in January 2018, Mikah Phillips came home from school with a headache. After it persisted, his mom, Debbie, took the 9-year-old to a pediatrician. Eventually, they went to a pediatric emergency room in Panama City, Florida, where doctors thought Mikah may have a sinus headache, possibly the flu.

A computerized tomography, or CT scan, revealed a parent’s worst nightmare for Debbie and Justin Phillips. Mikah had a brain tumor that was 6 centimeters in diameter, about the size of an egg. He was rushed to a children’s hospital in Pensacola, where he had surgery to remove the mass. 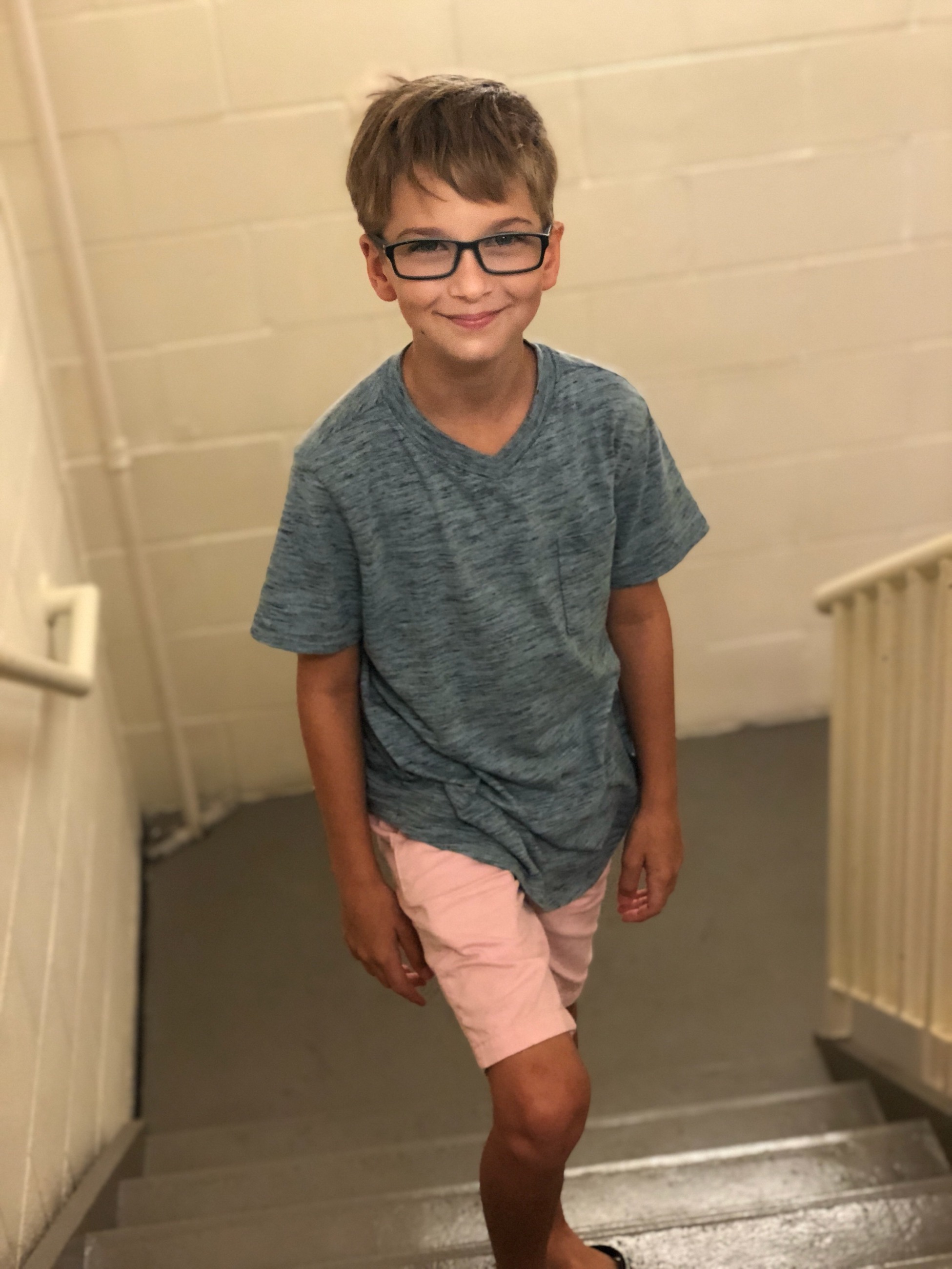 The mass was biopsied and on Feb. 8, Mikah’s physicians told his parents that he had glioblastoma multiforme, the most aggressive form of brain cancer in children and adults. The physicians referred the family to Sridharan Gururangan, FRCP (Edin.), the director of pediatric neuro-oncology at UF Health Shands Children’s Hospital in Gainesville. Debbie and Justin brought Mikah to meet Gururangan to talk through the diagnosis and decide on the next steps for treatment.

Scans from Mikah’s next follow-up appointment brought more bad news. Just four weeks after the surgery, there was a rapid recurrence of the original tumor — the mass had grown back in the same site, and it was its original size.

Gururangan had a plan. Mikah had a second surgery in March 2018, performed by UF Health pediatric neurosurgeon Jason Blatt, M.D., who successfully removed the entire tumor. Despite this aggressive surgery, Blatt made sure to keep Mikah from having any neurologic deficit by using a sophisticated surgical guidance computer to avoid damaging sensitive brain regions, thereby protecting his speech and motor functions.

Further examination confirmed that Mikah’s tumor was a rare form of glioblastoma that carried numerous mutations due to a condition called microsatellite instability, which causes the tumor to be genetically very unstable.

Research has shown this type of glioblastoma responds to a form of immunotherapy using an antibody (given through the vein) that inhibits “brakes” on the lymphocytes, which are preventing these immune cells from responding to his tumor. Once the antibody turns off the brakes, Mikah’s lymphocytes could rapidly multiply in his blood and mount an immune response in his tumor that could kill any remaining tumor cells after surgery.

This antibody, called Nivolumab, has shown dramatic responses and prolongation of life in adult patients with skin and lung cancers but is not approved by the Food and Drug Administration for use in children with brain tumors. However, Gururangan was able to obtain this commercially available but expensive antibody without cost for Mikah using a patient-specific compassionate use protocol under FDA guidelines. Since starting Nivolumab, Mikah’s tumor has shown no signs of regrowth for more than a year and has helped him avoid radiation, which is the usual treatment for this tumor. Although this treatment approach has had a positive effect on Mikah’s tumor, it is unclear how it will work in other children with his disease.

“Dr. G (Gururangan) is a wonderful man and has done so much for Mikah,” said Debbie. “He keeps our spirits lifted and is gentle when he needs to deliver bad results. He explains everything to Mikah in a way he can understand that doesn’t seem scary.” 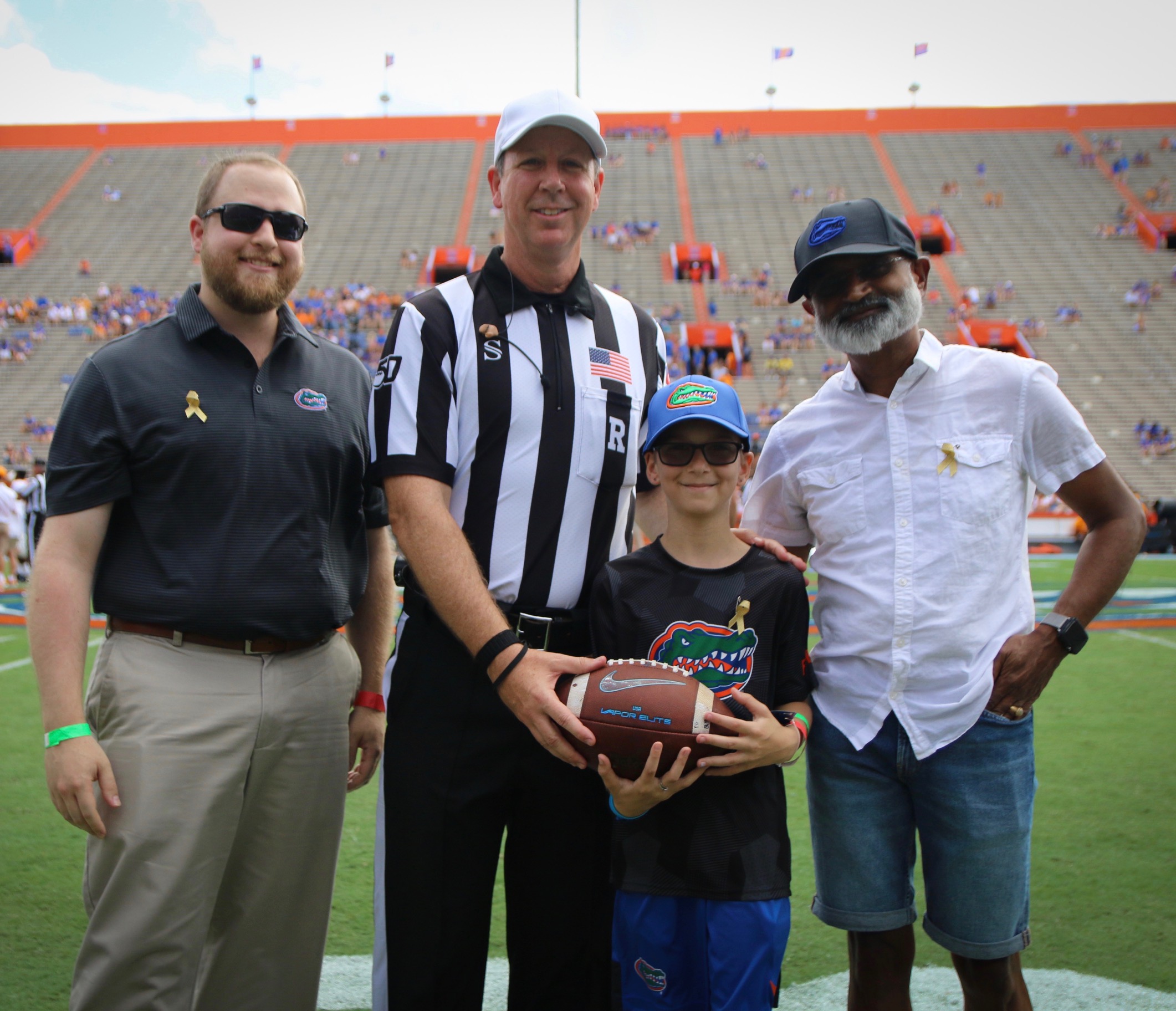 Every two weeks, Mikah receives infusions at the Pediatric Infusion Center & Specialties Clinic at UF Health Shands Children’s Hospital. In addition, he has an MRI done every three months to see if the tumor has grown back.

“We can’t say enough about the nurses in the infusion center,” said Debbie. “My son loves them and always give them big smiles.”

Traveling for Mikah and his family from Panama City to Gainesville became the norm for more than 16 months. They would leave at 6:30 a.m. and get to UF Health by noon, and then leave to drive home around 4 in the afternoon. The back-and-forth from Panama City to Gainesville would have continued as long as Mikah is able to tolerate this treatment. (The Pediatric Neuro-Oncology Family Support Fund helps families such as Mikah’s with financial assistance for travel and other needs, enabling them come to UF Health for treatment regularly).

“It had gotten difficult to travel so much, so our goal was to move to Gainesville, which we were excited to be able to do in July,” said Debbie. “No more long drives for us.”

Debbie explains that through all of the treatment, Mikah tries to be a normal kid. Now 10 years old, Mikah loves riding his bike and going to water parks.

“You wouldn’t know he’s sick,” said Debbie. “We try to keep his life normal, and Dr. G and UF Health have made that possible.”

After Mikah has taken the drug for two years, Gururangan will reevaluate his prognosis and, with the family involved, decide what course his treatment plan will take next.

“We take it day by day,” said Debbie.

Gururangan is cautiously optimistic about Mikah’s prognosis and is very gratified that he has been able to control the tumor growth with Nivolumab without having to use chemotherapy or radiation.

Gururangan credits the team approach at UF Health for being able to provide positive outcomes in children like Mikah with serious life-threatening illnesses.

“I am grateful to the scientists who work to discover potential treatments like this one as a form of immunotherapy,” Gururangan said. “I work closely with other immunotherapy experts at UF and beyond to devise novel approaches to treat children with brain tumors like Mikah’s using different forms of immunotherapy, including the one that has been so far successful in Mikah.”

Lauren Gajda joined the UF Health Communications team in February 2016. She came to UF Health with more than five years of health care marketing experience and currently serves as... END_OF_DOCUMENT_TOKEN_TO_BE_REPLACED