Christine Coombes has several vivid memories from the beginning of her son’s battle with bone cancer.

She remembers hearing the word osteosarcoma and how her head started spinning. She remembers sitting in a small room with her husband, Steve, as they waited for their UF Health surgeon. A couch and a small table topped with a box of tissues lived in the room. 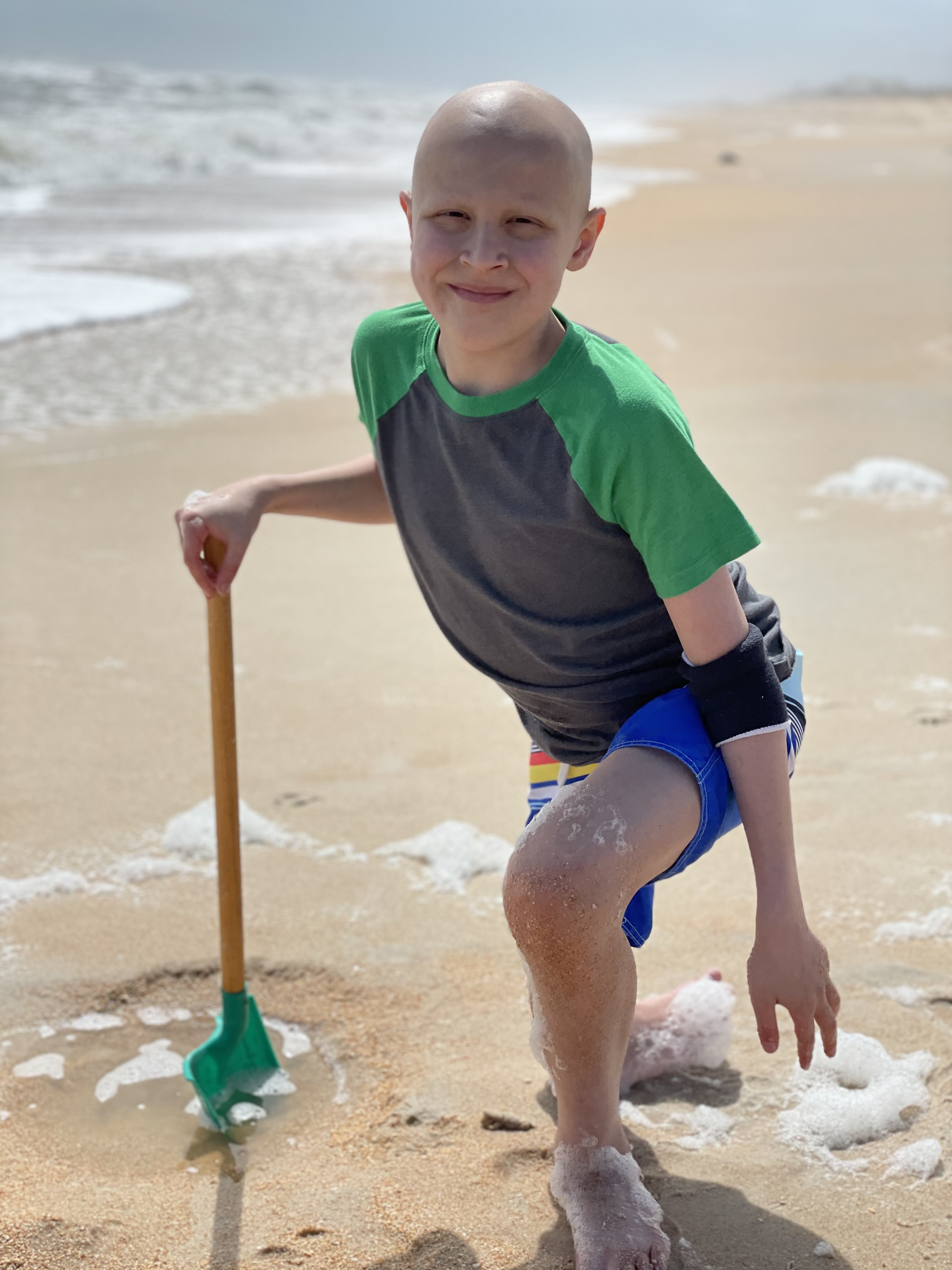 One of her most poignant memories involves a surgeon’s voice. Orthopaedic surgeon Andre Spiguel, M.D., told the family that “cancer always takes something, and it is taking normal away from your family. Normal is not an option.”

Christine’s son, Oliver, was 9 years old when his normal was taken away. What started as a random pain in his right knee led to a fall that left Oliver in crippling pain three months later.

“We took him to the doctor. They X-rayed the knee and saw nothing,” Christine recalled. “(Three months later), they X-rayed the full leg, and there it was — the tricky little devil hiding out in Oliver’s sweet femur.”

At 24 centimeters long, a tumor was the cause of Oliver’s pain. The same day as the revealing X-ray, the Coombes family moved from the UF Health Orthopaedics and Sports Medicine Institute to UF Health Shands Children’s Hospital. Oliver underwent an MRI and a biopsy a week later.

“We were immediately taken upstairs to 42 Peds and admitted for the ride of our lives,” Christine recalled. “It all felt so foreign and scary.”

Outside of Oliver’s room, she remembered how the hallway smelled sterile mixed with a microwave meal. Linoleum floors and fluorescent lights surrounded the 9-year-old and his family.

“We cried in those rooms. We bled. We laughed,” Christine said. “We shared our lives with the most amazing group of nurses and doctors imaginable.”

After two and a half months of chemotherapy, the time came to remove the tumor. Christine and her husband had lengthy conversations about the best procedure for their son. They talked to doctors and researchers. They talked to friends and families of other kids with osteosarcoma. That’s when they decided on rotationplasty.

Rotationplasty is a surgery where the middle section of the leg is amputated to remove the tumor. Then, the lower leg is rotated 180 degrees and reattached at the thigh. Oliver would then need a prosthetic leg where his heel acts as a knee joint.

“Insert my head spinning off and more tears and ugly crying than I thought imaginable,” Christine said. “But, ‘normal is not an option,’ right? So, we pushed on.”

With the surgery identified, the next step was telling Oliver and his sister, Emma. How do you tell a 9-year-old about rotationplasty? Equally important is when do you tell them? Will there be enough time to process? So many questions swirled for Christine. 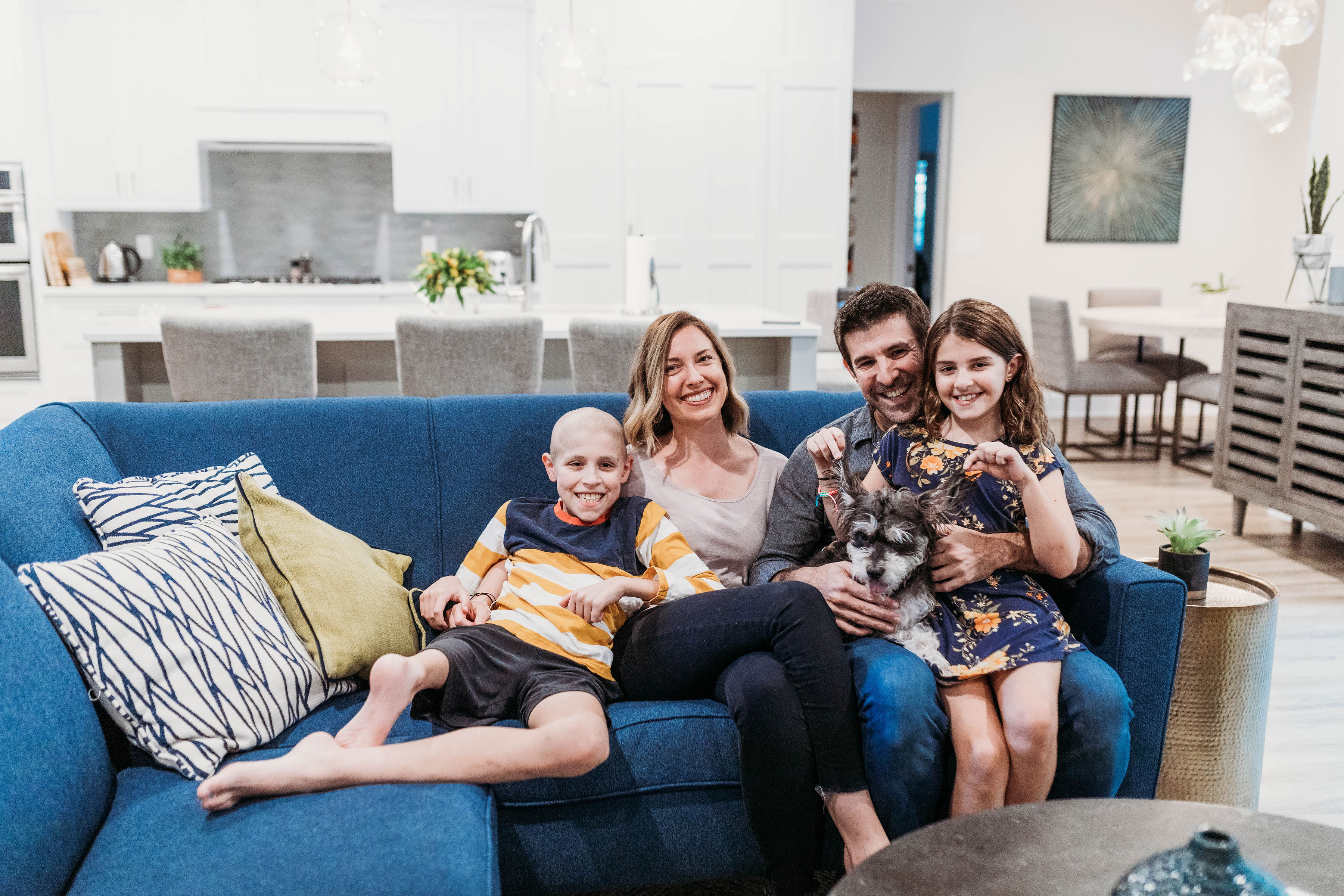 “We kept hearing, ‘Kids are amazing. You’ll be amazed,’” Christine said. “But, it didn’t feel that way to us. It felt sad and tragic.”

Christine and Steve Coombes were meticulous to ensure the mention of rotationplasty didn’t appear too rehearsed. They strived for a casual conversation. Serious but not too serious. They explained the procedure to Oliver and detailed what life would look like post-surgery.

The room was quiet.

“So, you’re telling me I’m going to have a robotic leg?” Oliver asked.

“Yes, buddy, you are,” Steve responded.

Oliver slapped the back of a chair.

“YES!” he yelled with excitement.

“Kids are amazing,” thought Christine. At that moment, much of the fear, dread and anxiety melted away. She knew her son was equipped for the arduous road ahead.

"I tried not to think too much about the scary parts,” Oliver said. “I really liked all the nurses and doctors. It was hard and scary, but me and my family were able to get through it with their help."

A trio of “superhero” doctors treated Oliver. His orthopaedic surgeon was Dr. Spiguel, and his knowledge and skill of this rare procedure were unparalleled. Plus, he never hesitated to take phone calls from the Coombes family. UF Health pediatric oncologists Joanne Lagmay, M.D., and Brian Stover, M.D., made time for the Coombes family, as well. They never rushed away to other patients and always answered every question and concern.

“These three doctors are parents, and we know they looked at Oliver as though he could be their child,” Christine said. “They looked at us as loving parents, just as they are. We felt that sincerity from them every step.”

Christine would be remiss not to mention the nurses. She said Unit 42, the pediatric oncology/hematology unit at UF Health Shands Children’s Hospital, holds a special place in her heart. She recognizes how their expertise, love and laughter helped Oliver, her husband and herself through some scary moments.

“We don’t know how to say thank you. We still talk about it,” Christine said. “What they did for us is too big. We know it’s their job, but it felt like more to us.”

Oliver not only trounced his tumor. He earned straight A’s in fourth grade while conquering cancer. Christine credits Oliver’s hospital teacher with an assist. She also recognizes how UF Health Rehab Center physical therapist Kyle Proctor has helped him walk again. Oliver meets with Proctor twice a week. He’s on a journey to get back to running, biking and being a kid with an amazing right leg. 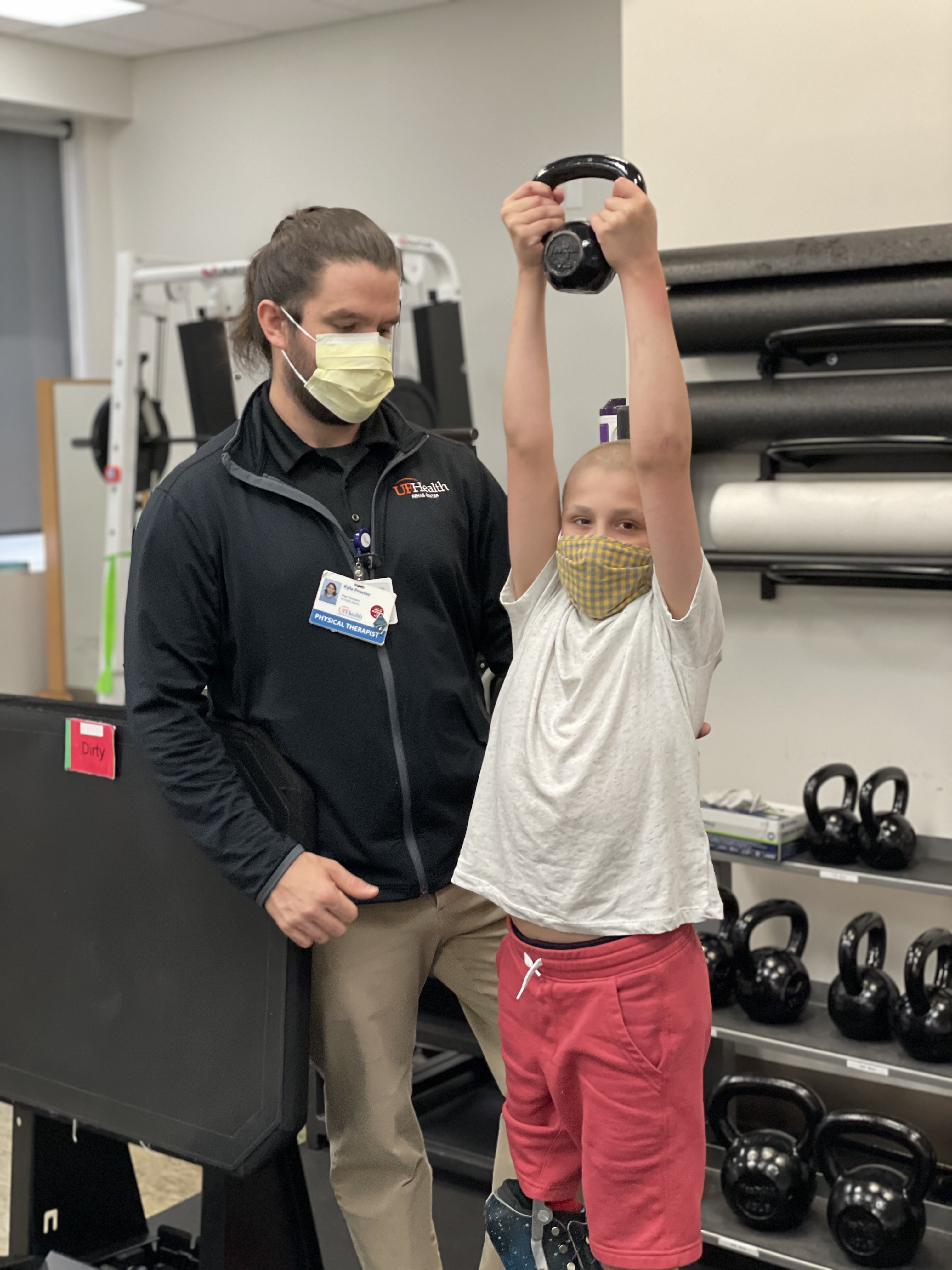 "When I heard I had to get my leg amputated, my first thought was to be excited. I didn't think how hard it would be to walk and do normal things with my prosthetic leg at the time,” Oliver said. “But, I'm getting better every day, and I'm proud of myself."

Oliver has scans during check-ups every three months for the next two years. Then, his check-ups become biannual for two more years. Each check-up monitors whether osteosarcoma has returned.

"Osteosarcoma is a highly aggressive bone cancer with no improvements in outcome in the past four decades,” said Joanne Lagmay, M.D., an associate professor in the department of pediatrics in the UF College of Medicine. “It is beatable if it hasn't spread, just like in Oliver's case. It is very hard to cure patients with metastatic disease.”

Christine is unsure what lies ahead for her 10-year-old. Nevertheless, she knows with UF Health by Oliver’s side, her family is prepared for anything.

“We don’t have a say in Oliver’s prognosis or what’s to come medically for him in his life,” Christine said. “But, we’re beyond grateful that we’re here, that UF Health is our hometown hospital and that we have the best people with the most capable minds and hands here to care for us.”