The best way to prevent the spread of COVID-19 is to get vaccinated. You can get a vaccine in many places in your community. Find a walk-up location or schedule an appointment today. END_OF_DOCUMENT_TOKEN_TO_BE_REPLACED

A Quest for Answers: Cayden’s Story

Cayden Kauffman loves to explore the world in his baby walker. Once the 9-month-old gets scooting, there’s no stopping him from thrusting forward and sliding around. While Cayden today is much like a typical bouncing baby boy, his kick-start to life was anything but ordinary. 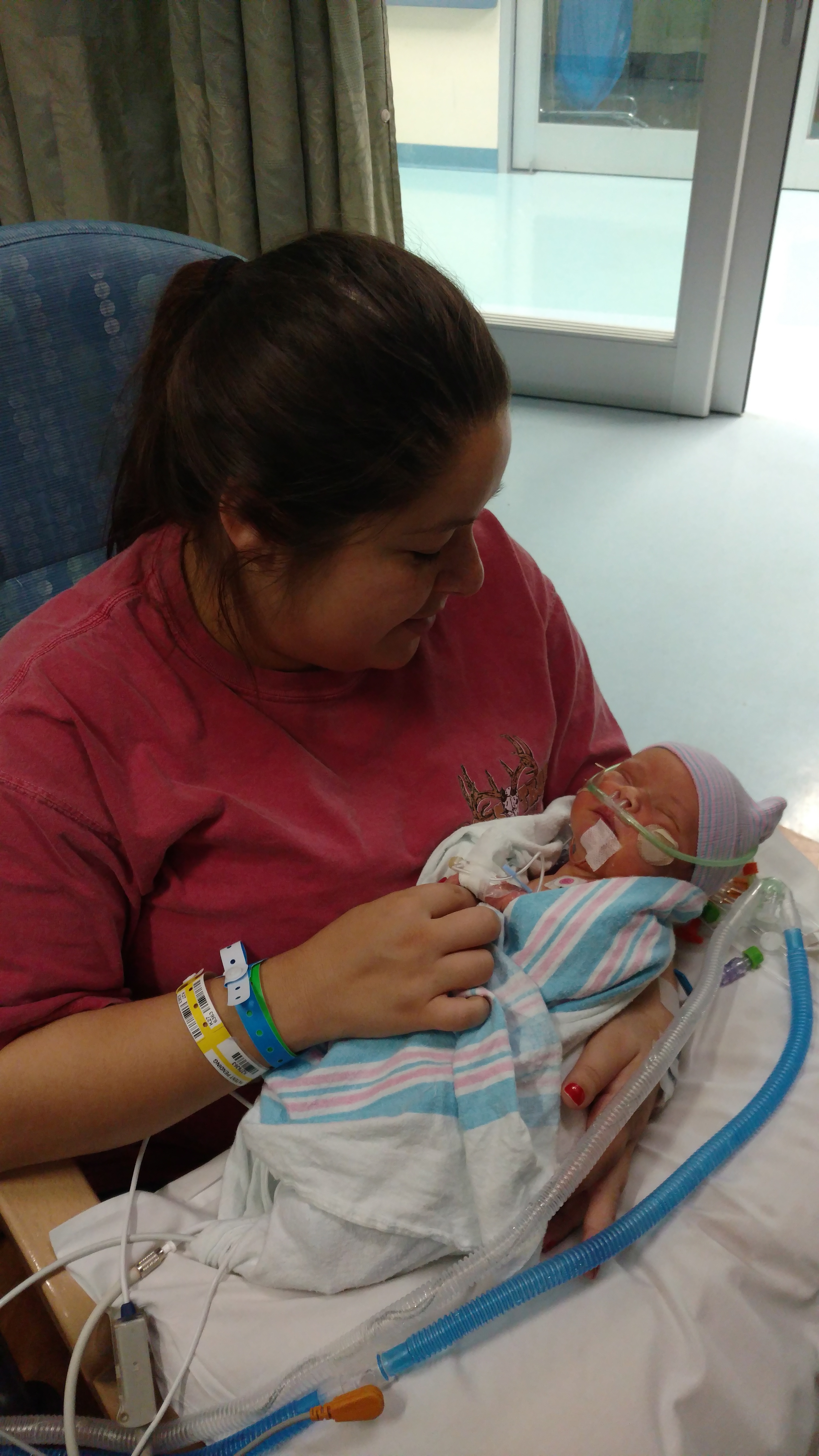 Alexandrea and Nicholas Kauffman of Panama City went for their 18-week sonogram to learn the gender of their second child, Cayden. During the appointment, doctors discovered that the fetus’ heart wasn’t developing properly and they referred the family to a maternal fetal medicine, or MFM, physician in the area.

“I cannot be blindsided,’’ said Alexandrea. “I said, ‘Give me the worst-case scenario.’”

The MFM physician was unable to pinpoint Cayden’s abnormality and referred the parents to Jennifer Co-Vu, M.D., director of the fetal cardiac program at the UF Health Congenital Heart Center and a part of the maternal fetal care program at UF Health in Gainesville.

The uncertainty was stressful for the couple. “No one having answers was the hardest part,” Alexandrea recalled.

The Kauffmans traveled to Gainesville hoping for answers. At UF Health, Co-Vu explained that she found multiple heart defects and a labor plan needed to be put in place. Cayden would be born with an isolated aortic atresia, a defect where the aortic valve is not open, and a ventricular septal defect, a condition win there is a whole between the lower chambers of the heart.

Since the fetus was at high risk, physicians recommended that Alexandrea give birth in Gainesville. The couple traveled to Gainesville for appointments every three to four weeks and then every two weeks as the delivery date approached. At 37 weeks, the Kauffmans stayed in Gainesville and, at 39 weeks, Alexandrea went into labor at UF Health Shands Children’s Hospital. She was wheeled to an operating room in case an emergency C-Section would be needed. Her nurse, Tara Summers, R.N., talked her through every step of the way to reassure Alexandrea that she and Cayden would be okay.

“She said, ‘You got this, push as hard as you can,’” Alexandrea said.

Once Cayden was born, he was taken to a warmer and wheeled to the neonatal intensive care unit, or NICU. Shortly thereafter, Alexandrea’s husband noticed she was hemorrhaging. Nicholas called in the nursing team and they went quickly into action to stop the bleeding.

“The nurses went above and beyond in how they handled the situation,” Alexandrea said. As a result of her hemorrhage, Alexandrea wasn’t able to walk until the next day. Meanwhile, Cayden spent two days in the NICU and was transferred to the pediatric cardiac intensive care unit, or PCICU, prior to surgery. One week after birth, Cayden underwent corrective heart surgery by Mark Bleiweis, M.D., the director of the UF Health Congenital Heart Center and chief of congenital cardiothoracic surgery at the UF Health Congenital Heart Center. Cayden recovered for three weeks in the PCICU and was sent home just before his first Christmas. In June, Cayden underwent another surgery and was in the PCICU for a week. As Cayden’s body grows, he will need additional procedures to heal his heart.

But those operations are in the future. For now, Cayden is focused on just being a little boy.

“He is just so sweet and is so happy,’’ Alexandrea said. “It’s amazing considering what he’s been through.”

The UF Health Congenital Heart Center, consistently ranked among the top programs of its kind in the U.S., is celebrating 10 years of healing hearts.