The best way to prevent the spread of COVID-19 is to get vaccinated. You can get a vaccine in many places in your community. Find a walk-up location or schedule an appointment today. END_OF_DOCUMENT_TOKEN_TO_BE_REPLACED

In the right hands

At the beginning of December 2019, 16-year-old Eniyah Franklin was visiting family in Tallahassee when she decided to make herself a snack while she was alone at her aunt’s house. She had cooked numerous times before, yet this was her first experience with frying. The oil became too hot, and the pan caught on fire. In the chaos of the moment, Eniyah hurried to carry the burning pan to the back porch. As she stepped outside, the contents spilled on her, severely burning her upper body and one of her thighs. 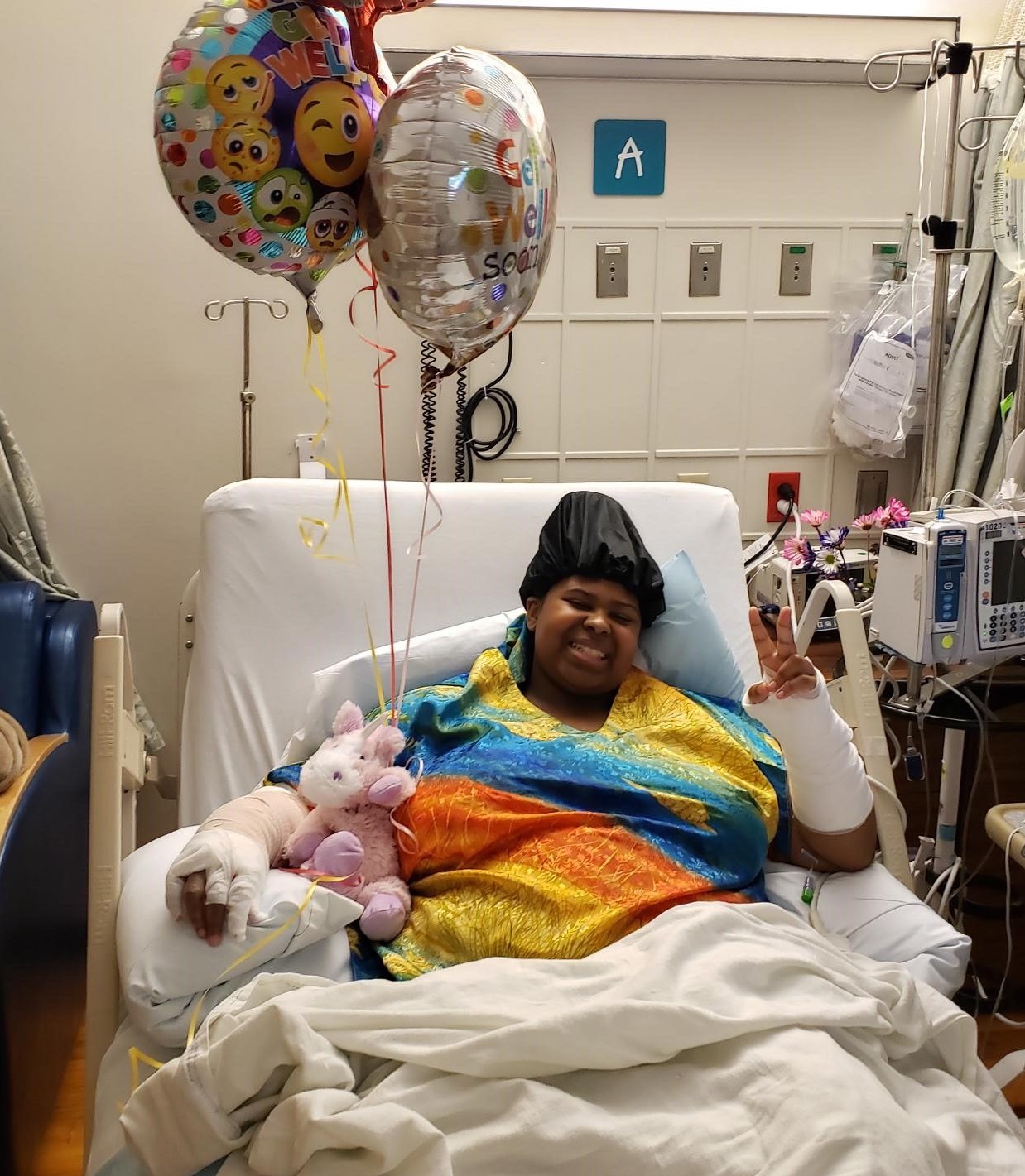 However, these emotions transformed into laughter and ease thanks to the care of Robert “Scot” Bush, R.N., a registered nurse in the Burn Center who retired in August. As the nurses were scrubbing the skin from her burns, Bush brought a smile to Eniyah’s face as he playfully made a cute outfit out of her burn garments and comforted her as he walked her through the process of changing her dressings.

That was when the mother and daughter knew they were in the right hands at the right place, the Franklins said.

Eniyah was thankful that she was able to play one of her favorite video games, Minecraft, during her hospital stay. Similarly, she deeply appreciated Taylor Hinton, CCLS, Child Life specialist for UF Health Shands Children’s Hospital, who she and her mother fondly describe as “amazing” and “awesome at really getting to know her as an individual.” To take her mind off the pain, Hinton brought her a virtual reality headset. As nurses were cleaning and changing her wounds and dressings, Eniyah was ‘swimming with dolphins.’

On her third day at UF Health Shands, Eniyah underwent surgery and received a skin graft on her arm. The long road to recovery had begun.

Once Eniyah was discharged, they headed home to Tampa. Worried the lengthy commute to and from Gainesville would be too much for her family, Zakiya attempted to find a local hospital to continue her daughter’s care, but was unsuccessful. After two exasperating weeks without getting an appointment in the Tampa area, she picked up the phone and called UF Health Shands. They could see her daughter immediately.

Zakiya said she is extremely grateful for the patience and compassion the nurses showed while demonstrating how to change Eniyah’s dressings and for equipping her with the resources to feel confident she could care for her daughter at home.

Furthermore, the mother and daughter appreciated Eniyah’s nurse, Lauren Indelicato, DNP, APRN, a nurse practitioner in the UF Division of Pediatric Surgery, for her attentiveness and encouragement when dealing with even the smallest of setbacks. She was extremely accommodating, the pair said. Mindful of the longer distance they had to travel, Indelicato scheduled Eniyah’s appointments early in the day so the Franklins could arrive home at a decent hour. Eniyah said Indelicato was a “10 out of 10.”

Eniyah reached a turning point when she began working with her occupational therapist Rose Hayes, O.T. Hayes gave her the space to not be a victim and allowed her to realize she was capable of doing things, even if they needed to be done a different way.

Rather than allowing herself to sink into self-pity, Eniyah turned her life around and learned to celebrate being able to do things by herself once again.

One of the biggest steps in her road to recovery, as well as a “Christmas gift to herself,” happened on Dec. 25, 2020 — the last of Eniyah’s xenografts came off. A xenograft is a temporary skin graft substitute, or dressing, that is used on patients to cover their burns, allowing their own skin time to heal.

Due to her surgery and appointments, Eniyah missed a lot of school, but she finished the semester and 11th grade on time. This summer, she started her first job. 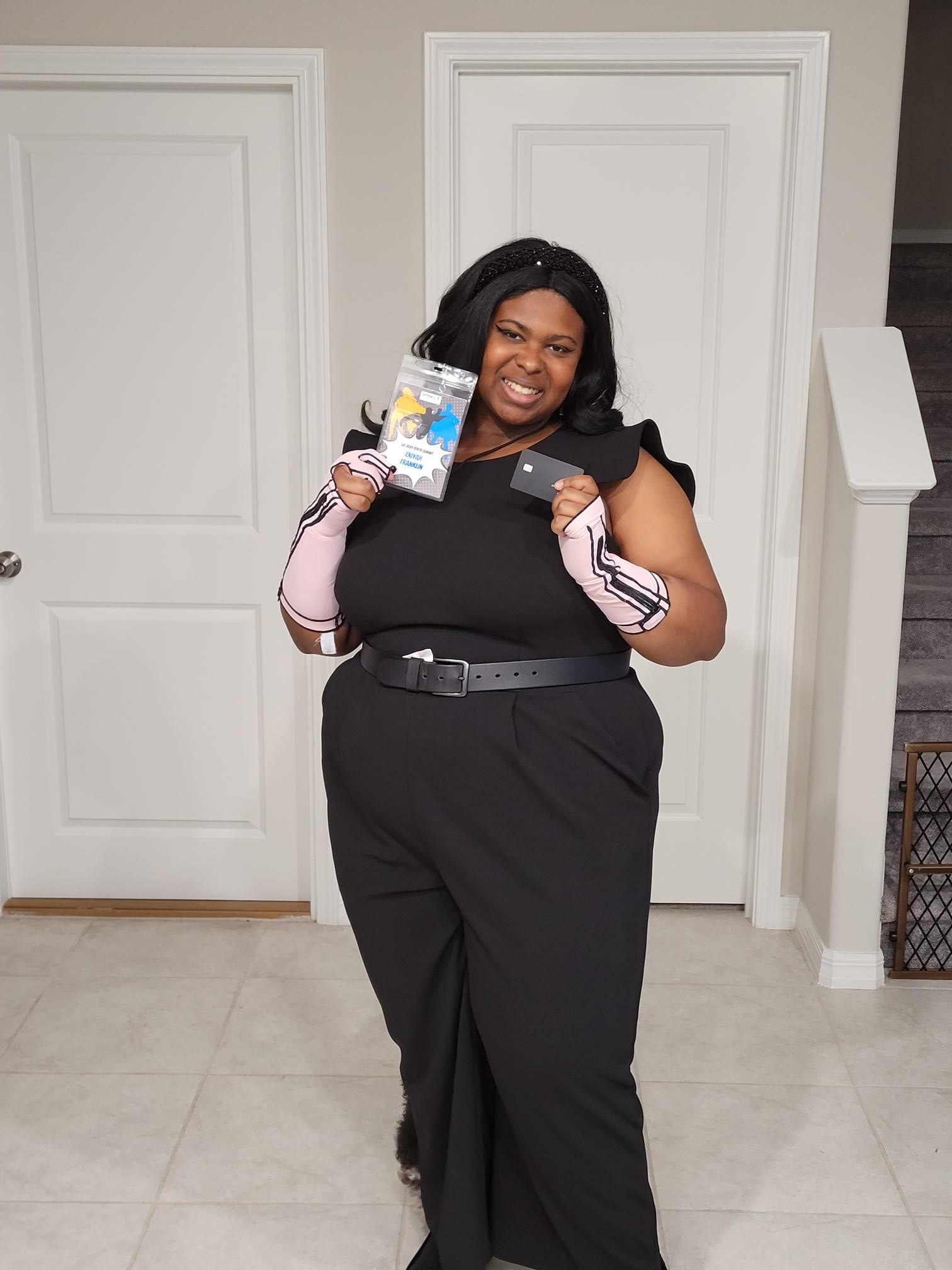 Zakiya said watching Eniyah overcome all of these obstacles and seeing everything she has accomplished makes her an extremely proud mother.

“She got great care and that was kind of the saving grace,” Zakiya said. “Everyone was super nice, super helpful, super accommodating … I was really, really grateful for that.”

As a graduate of Florida State University, Zakiya and her daughter constantly joked about being at the “Gators hospital.” However, Eniyah’s mother happily and publicly pronounces that she loves UF Health Shands, the phenomenal nurses in the burn clinic and all of the other employees who supported her family throughout this experience.

“We wouldn’t be as far along in this journey, and we wouldn’t have had such a great experience had we gone anywhere else,” Zakiya said.