The best way to prevent the spread of COVID-19 is to get vaccinated. You can get a vaccine in many places in your community. Find a walk-up location or schedule an appointment today. END_OF_DOCUMENT_TOKEN_TO_BE_REPLACED

Robyn Nelson called louder and louder for her 4-year-old daughter, who was somehow drifting away despite lying right by her mother’s side.

“Mommy, where are you? I don’t see you,” said Brooklynn Nelson, who repeated the same response after her mom assured her she was right in front of her face.

During this time, Brooklynn’s eyes deviated to the left. She was having a seizure, her first of many in what has become an arduous battle with epilepsy.

On that Fourth of July night in 2006, EMS swiftly took Brooklynn, who was unresponsive the entire ride, to UF Health Shands Hospital. She was given sedatives to undergo a spinal tap, or lumbar puncture, eventually regaining consciousness to reunite with her shaken mom.

“That was one of the most terrifying experiences of my entire life,” Robyn said. “It was completely debilitating, and I was racked with fear after that.”

New cases of epilepsy are common among young children. However, while some are triggered by a medical condition or injury that affects the brain, Brooklynn’s epilepsy was de novo, likely from a subtle focal brain malformation.

At UF Health Pediatric Neurology, she was investigated on the epilepsy monitoring unit and followed for several years while being treated with medication. Still, she was having breakthrough seizures, or those that suddenly occur despite consistent medical treatment.

The condition had Brooklynn watching life pass her by, stealing her happiness and freedom.

“Whenever I was having seizures, I had adults hovering over me watching my every move,” Brooklynn said. “Because they’re like, ‘Oh, you’re going to seize. You can’t do anything by yourself.’” Although physicians at that time discussed Brooklynn’s case at a conference and indicated she might be a potential candidate for surgery, Robyn simply wasn’t ready to allow her daughter, who was 6 years old, to have brain surgery before exploring other options first.

There was a possibility of her incurring brain damage. There was even a risk to Brooklynn’s life.

“You just don’t know what can happen. It’s the brain. It’s super unpredictable,” Robyn said. “I mean, you take out a kidney, you still got one, things are functioning. You take out a gallbladder and things still function. Some people live with a lung. The brain? It’s different.”

When Brooklynn was around 13 years old, the family transferred her to another hospital within the state of Florida to get more answers. She had countless MRIs, CT scans, PET scans, EEGs. After trying different medications, they found a regimen that was helping.

However, there was a problem. It was causing significant weight gain.

“I mean we’re talking she went from probably 115 to 180 pounds over the course of a year with no real change in her diet or activity,” Robyn said. “She was an active cheerleader, so we knew it was medication-related. We decided to stop taking that medication.”

Brooklynn withdrew from that medication for about four months. In February of 2018, she had a seizure after being seizure-free for about 15 months.

It was like, ‘What do we do now?’ That was when we sought care with Dr. [Giridhar] Kalamangalam.”

Getting to the bottom of Brooklynn’s seizures

Dr. Kalamangalam, her neurologist, brought Brooklynn into the UF Health Neuromedicine Hospital’s epilepsy monitoring unit in March of 2018, taking her off all medications.

The hope was to invoke her seizures, the very thing that horrified Robyn when she first saw it happen 13 years ago after a peaceful family barbecue on Independence Day.

Brooklynn ended up having 16 seizures detected on her EEG in one 24-hour span while in the monitoring unit.

However, unlike the very first seizure that made Robyn feel powerless, these episodes brought hope, and they were key to Brooklynn’s recovery. 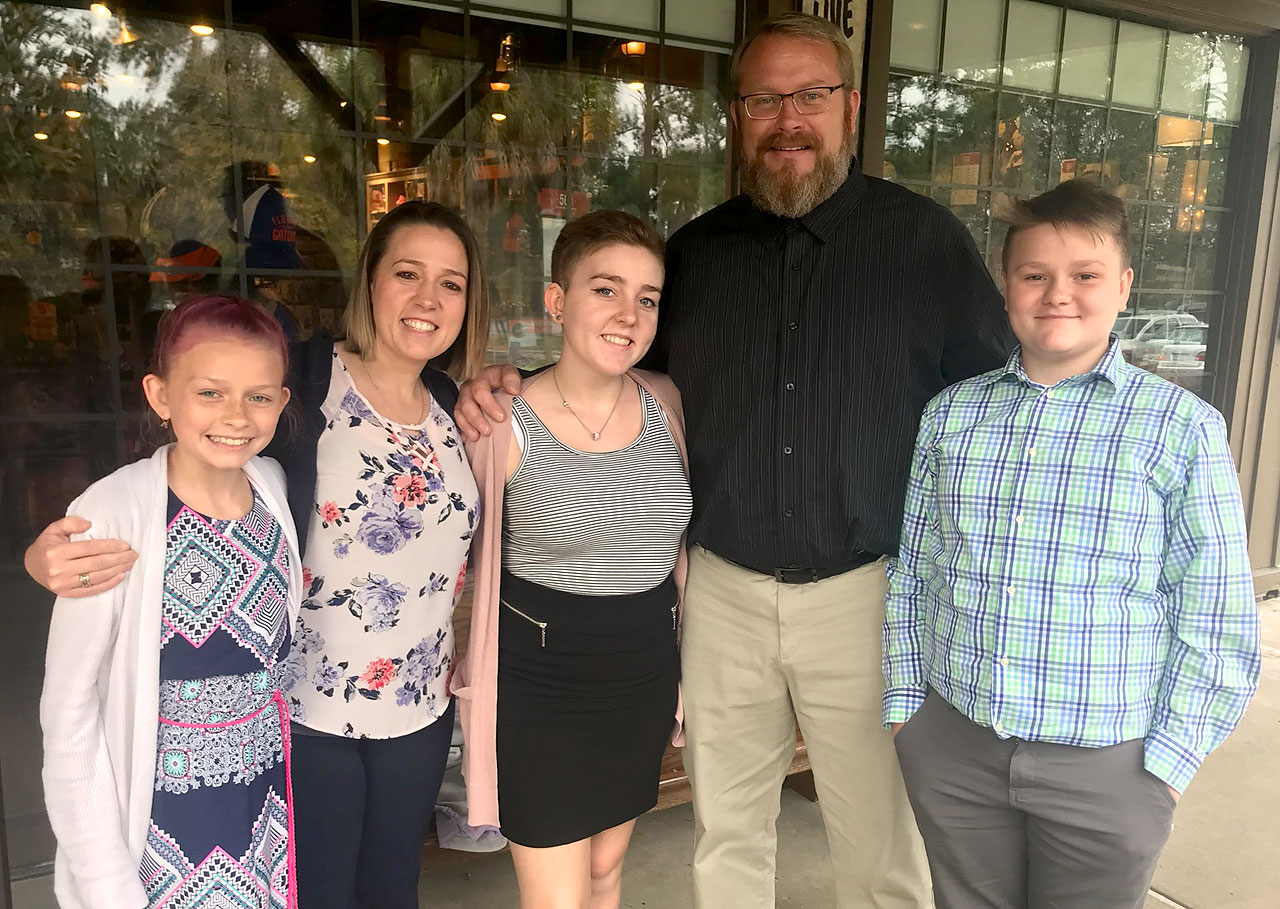 Parents in Robyn’s position dread the sight of their child having a seizure and normally take every measure to prevent them, but it’s quite the opposite when you’ve got experts in the room who need to see it happen.

“That was a lot for her to have, but it helped us to know, ‘OK, this is the region of the brain that this is coming from,” Robyn explained. “Externally, we can track that, but now we have to figure out where to go from here.”

To bring about these seizures in Brooklynn, physicians had to try multiple triggers, the main one being sleep deprivation. There were times when Brooklynn was awake for more than 24 hours, stimulating herself by watching movies, playing games or painting her nails.

“You pray for them to come,” Robyn said.

Based off the information they captured from that prolonged Video-EEG, study, Dr. Kalamangalam expressed his belief that Brooklynn would benefit greatly from surgery. Still, there were several steps they’d need to take first.

No matter how long the process, Brooklynn was never alone.

“My mom was so supportive,” Brooklynn said. “She was there for every hospital stay. We just have a really close relationship. She’s my best friend.”

At one point last year, Brooklynn — having exhausted six or seven medications — was experiencing seizures that had become more frequent and more severe. They were coming in the form of grand mal seizures, the kind that cause loss of consciousness and violent muscle contractions. These led Brooklynn to fall and injure herself several times.

Those incidents clarified Brooklynn’s path to surgery. She had to be informed of her options, have neuropsychological testing, a PET scan, an MRI and blood work.

Robyn was overwhelmed when her daughter got past one final hurdle.

“I’ll never forget where I was the day that I got the call that she was cleared to move on to the next step, which was the SEEG (stereoelectroencephalography),” Robyn said. “I remember crying tears of fear and excitement that day.”

The SEEG, performed in August of last year, was the first of two invasive surgeries Brooklynn would have. The SEEG was done to further pinpoint where the seizures were originating from. Depth electrodes were inserted into different regions of her brain, including the temporal lobe, frontal lobe and insula. 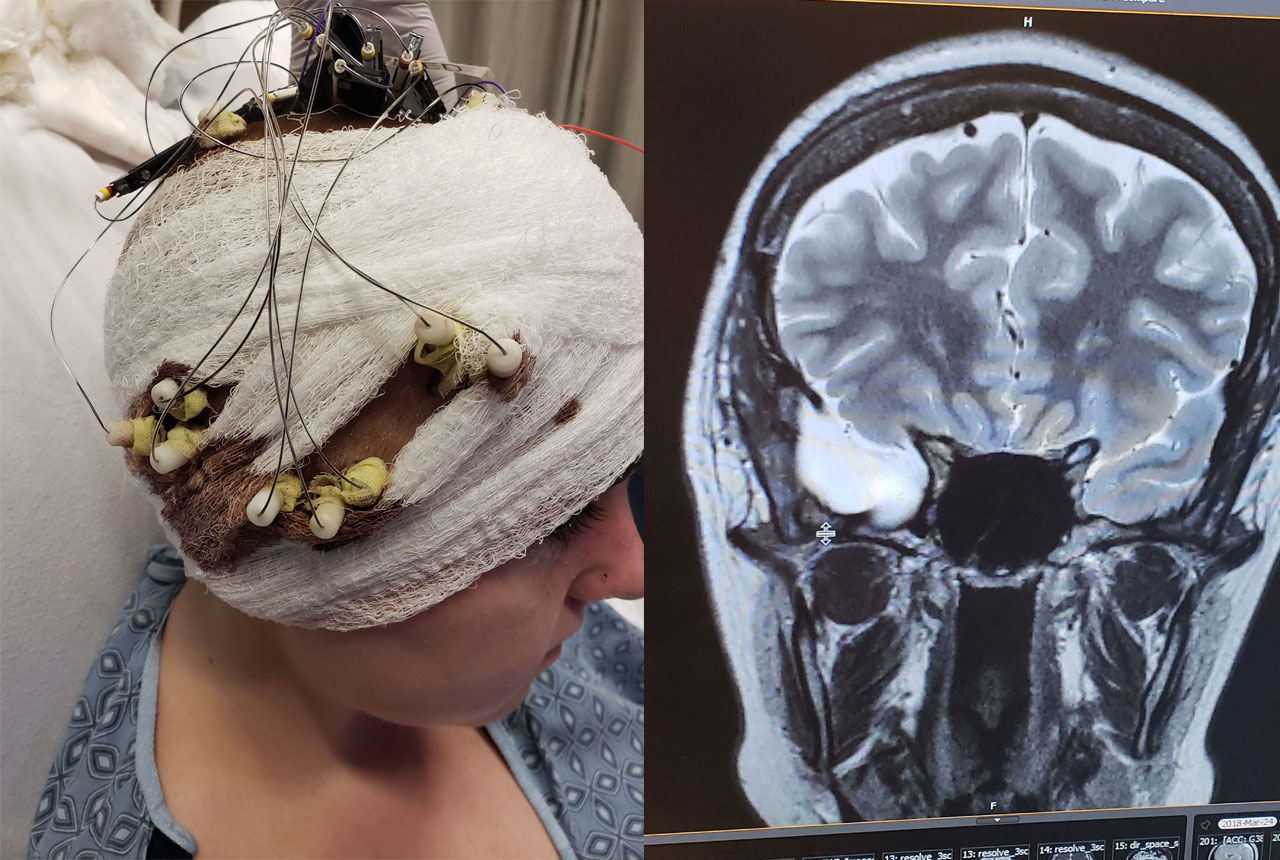 Brooklynn, treated in the neurointensive care unit, had eight seizures. Her neurosurgeon, Dr. Steven Roper, and his team obtained a clear map of Brooklynn’s brain and discovered the seizures were originating from the right hippocampus. Meanwhile, they knew exactly what needed to be removed to give Brooklynn the best chance for fewer seizures and a better quality of life.

“After being in the hospital for nine days, Dr. Roper told us that they had all the information they needed,” Robyn said.

Even after 13 years of exhausting every other option, and Brooklynn’s temporal lobe resection already scheduled, Robyn struggled with the enormous risk the operation carried. She went to therapy and hoped a sign from a higher power would indicate she was doing what was best for her daughter.

Robyn got that sign the same day Brooklynn was slated to have her surgery last October.

“That morning she woke up and she had two seizures right back to back,” Robyn said. “It was just kind of that clarity came over me. This is why we made this decision. This is God’s way of saying, ‘You have to do this. This is the right thing.’”

For nearly her entire life, Brooklynn wondered whether she’d ever enjoy full independence, like the freedom to not need someone in the pool with her at all times, or to have her friends on standby for emergency treatment during a sleepover.

“I felt like all of my friends or the people at my high school, they were just living their life normally,” Brooklynn said. “And I felt like I was being held back and put in this little box. I wasn’t able to grow up, because I had to be watched all the time, and that really hurt me. I feel like I didn’t have the same chances as them.”

Brooklynn is already far removed from that feeling. In fact, she says she can’t even remember what it feels like to have a seizure since her last episode was so long ago.

Brooklynn has been seizure-free since her temporal lobe resection in October. April 10 was a big day for her, marking exactly six months since that surgery, opening the doors (literally) to the ultimate symbol of freedom for any 17-year-old. Six months without a seizure meant Brooklynn was eligible to get a driver’s license in the state of Florida. Recently, Robyn was at the DMV, jumping at the opportunity to prepare everything for Brooklynn. She surprised her daughter with a car shortly after.

“Oh my gosh. I was so excited,” Brooklynn said. “I always thought that I was never going to drive, so it was the realization that it’s all happening. I got a car, and I’m about to get my learner’s permit. It’s just fantastic.”

This challenging experience has inspired Brooklynn, a hopeful PA or nurse practitioner, to make a difference in other people’s lives.

She was accepted into the UF Student Science Training Program, or SSTP, a seven-week program that runs from June 9 to July 27. It consists of laboratory research, a science lecture series and a UF Honors Program seminar class. The emphasis of the program is research participation with a UF faculty research scientist and his or her research team.

Brooklynn was thrilled to be accepted as she works toward her main goal of attending UF.

“Because I’ve had so many medical issues in my life, I can relate to the patients better than someone who didn’t go through all this stuff,” Brooklynn said. 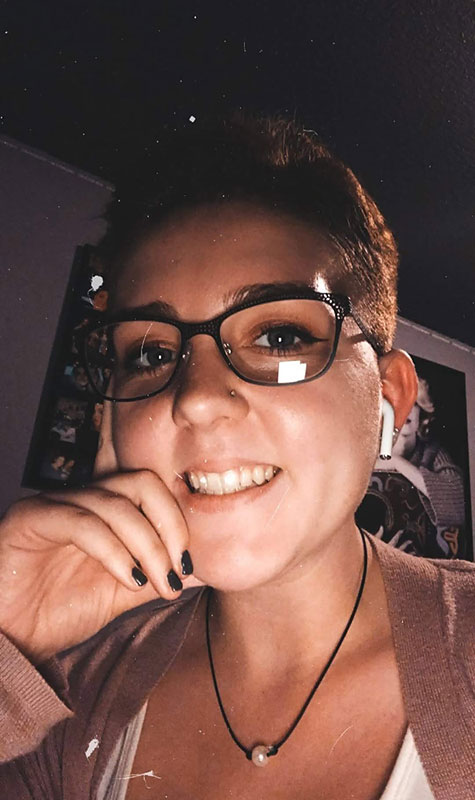 Brooklynn is still overcoming medical issues related to her epilepsy. She underwent two surgeries in April, one to have a stent placed in her ureter due to kidney stones that developed from one of her anti-seizure medications. Not long after, she went in to have the stents changed and have the kidney stones blasted and broken apart.

And Brooklynn will stay on anti-seizure medication for at least two more years. After that, they can decide whether to take her off it.

For now, Robyn is appreciating the new route they’re on, which is far removed from the one she braved with Brooklynn.

“Right now, we’re just taking it day by day,” Robyn said. “She’s a great kid, and she’s super easy-going, and all the stuff she’s been through, you would never know it.”

Talal Elmasry, born and raised in Gainesville, is a graduate of UF’s College of Journalism and Communications. He joined UF Health’s marketing team after 15 years in journalism, including a... END_OF_DOCUMENT_TOKEN_TO_BE_REPLACED

To schedule an appointment at the UF Health Neuromedicine Hospital, call 352.273.6990.