The best way to prevent the spread of COVID-19 is to get vaccinated. You can get a vaccine in many places in your community. Find a walk-up location or schedule an appointment today. END_OF_DOCUMENT_TOKEN_TO_BE_REPLACED

Inspired by her older brother’s commitment to his troop, Olivia Foli, 16, knew that she wanted to follow in his footsteps and join the Boy Scouts of America, or BSA.

However, Olivia did not want to be just any Boy Scout — She wanted to be an Eagle Scout, the highest rank attainable in the Scouts BSA program.

Just two short years ago, this was an impossibility. It was not until 2018 that the BSA announced that girls would be allowed into the scouting program.

For the first time in history, Olivia and many other girls would have the opportunity to earn the honor of being an Eagle Scout.

Olivia is a part of Gainesville’s Scouts BSA Troop 21, an all-girls troop that she helped start in February of 2019.

In order to receive her Eagle Scout ranking, Olivia would need to plan and lead an extensive service project. She decided on one that would benefit patients at the UF Health Shands Children’s Hospital, as she was once a patient herself.

Olivia was born with brachial plexus, a nerve injury, which left her right arm paralyzed. After surgery at 7 years old, she attended occupational therapy at UF Health Shands until she was 14.

“I feel like the meaning behind my project is bringing joy to these patients in such a difficult time because I personally know what it is like to be in the hospital as a child,” Olivia said.

Upon completion of the scavenger hunt, patients will get to keep one smaller, painted rock that speaks to them. Olivia calls them “healing stones.” Each stone contains an encouraging message or trait that Olivia hopes will connect with young patients.

The stones were hand-painted and sent directly to Olivia for her project. 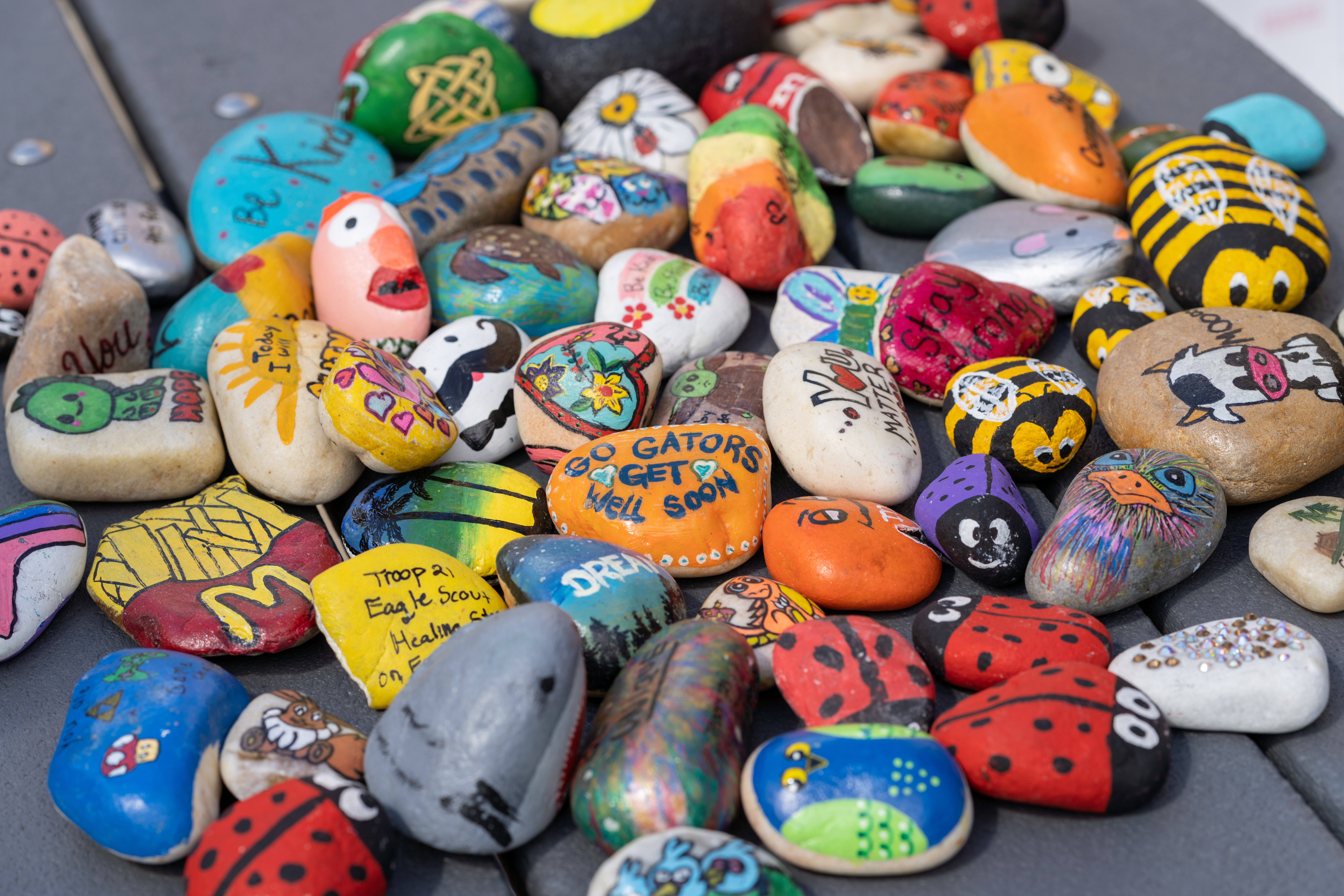 The idea came about when Olivia’s mother, Kim Foli, bumped into Amy Wegner, director of the Child Life Program, in the hallway at UF Health Shands Hospital.“Being able to take these small, natural rocks, paint them and help them to bring joy to the patients is really what my project is about,” Olivia said.

Kim expressed Olivia’s interest in volunteering at the hospital as a scout. At that time, UF Health had just started breaking ground on the UF Health Children’s Healing Garden.

According to Wegner, the Eagle Scouts have a similar mission of promoting being outdoors and in nature, just as the garden promotes relaxation and physical activity for patients and families.

Wegner had the opportunity to attend a Troop 21 meeting to discuss future projects for the garden. She says Olivia’s extensive scouting background helps her better understand the therapeutic benefits of nature, especially for children.

Upon completion of her project, Olivia will receive her Eagle Scout ranking, making her part of the inaugural class of female Eagle Scouts.

“To me, Eagle Scout isn’t really the badge, but more of the skills that you learn to get to that point,” Olivia said.

Kyndal Rock is a public relations major at the University of Florida, originally from Vero... END_OF_DOCUMENT_TOKEN_TO_BE_REPLACED