Please note, patient visitors will be limited to no more than one for the patient’s entire hospital stay or visit. Children under the age of 18 will no longer be allowed as visitors. For more information on our ongoing response to COVID-19 in Gainesville, Jacksonville, and Central Florida, visit our coronavirus website. END_OF_DOCUMENT_TOKEN_TO_BE_REPLACED

Songs from the Heart

Swaying underneath bright lights, Ricky Kendall holds the neck of his guitar with one hand and points into the crowd with the other.

“Anyone out there with a big imagination?” he asks.

A little girl in a big fluffy dress jumps into the air. “Me! Me!” Nearby, a toddler totes a plastic hoop that towers over her, and a young Spider-Man bounces her body to the beat, nearly missing her mouth with giant spoonfuls of ice cream.

The audience for this concert, held Nov. 17 at Heartwood Soundstage just south of downtown Gainesville, is younger than usual for Kendall. That’s because it’s a celebration of Kendall’s latest release, “Thankful for Love,” an album co-written between 2013 and 2014 with pediatric patients at UF Health Shands Children’s Hospital.

“Thankful for Love” is available on CD with a $20 donation to Brianna’s H.O.P.E. Fund. Donate here.

As an artist-in-residence with the UF Health Shands Arts in Medicine program, Kendall spends much of his time with patients of all ages performing tunes and creating music and visual art. This album, however, is so much more than a collection of songs. It’s an affirmation of the power of love in healing both body and soul.

“I tried to write in veins that would speak to several emotional stops during a hospital stay,’’ Kendall said. “These kids who are going through terminal illnesses or organ transplants are asking existential questions that most kids don’t have to consider.’’

Many of the album tracks retain the upbeat melodies and relaxed rhythms omnipresent in children’s music, he said, but the lyrics go deeper than that. He hopes families going through tough periods of illness will listen to the songs together.

“On this album, there’s silliness and there’s sadness,’’ Kendall said. “But in the sadness, there’s hope. I want this music to help alleviate the difficulty of processing this deep information for both children and their parents.”

Kendall hopes listeners gain a sense of the power of human connection that can occur within a health care setting.

“Kids get a lot of care here, but oftentimes that story doesn’t make its way out of the hospital,” he said. “This is a way to tell their story outside of those walls through music and art.”

The day “Thankful for Love” was composed at UF Health Shands Children’s Hospital was a particularly tough one for Brianna Medina, Kendall recalled. The 8-year-old Orlando girl had a lot of questions – questions about the heart she was waiting for, questions about the artificial heart machine she was hooked up to, and questions of why. “Why me? Why now? Why isn’t this getting better?”

Kendall, who visited Brianna regularly in the pediatric ICU where she awaited a heart transplant, tried to steer the conversation toward something simpler.

“We started to think about the things we’re thankful for,” he said. “Brianna listed her dog, her family, God. I jotted these down and asked her, ‘Do you mind if we write a song about this?’ I went home, put chords and a melody to the lyrics and brought it back to her. She made a couple of changes, she sang it with me and she learned it.”

Kendall said this experience planted the seed that ultimately grew into the eight-song album “Thankful for Love,” and beyond. He began to work on songwriting more frequently with the young patients he visited, helping them translate their visual artwork into words and spending his evenings at home putting melodies to those words for the songs on the album. 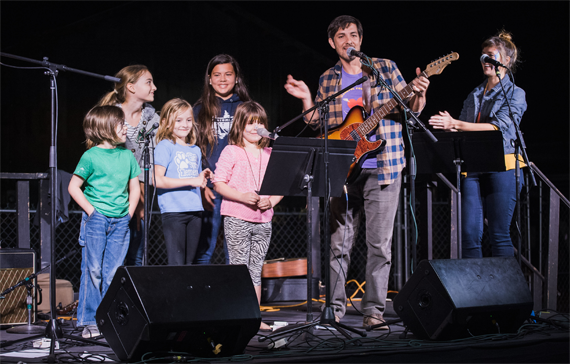 Ricky Kendall performs Thankful for Love during a concert in Gainesville to mark the debut of the album he helped create with patients at the UF Health Shands Children’s Hospital. With him are the children of friends and colleagues: From top left, Nathalie Larson; top right, Taye Shitama; bottom row from right Harper Melosh, Valarie Larson, and Wren Melosh.

“After that visit, I wanted to collaborate more with kids,” he said. “Their imaginations are boundless.”

The songs on the album cover topics including your best stuffed animal friend, the arrival of a new baby brother, make believe, fighting for your life and staying positive. On “Girog,” Kendall outlines the entire life of a half-dog, half-giraffe stuffed animal.

The co-writing was a give-and-take process. Sometimes Kendall would lift lyrics directly from the young peoples’ mouths. He’d often ask their opinion on the guitar tone to best match the mood of the lyrics.

“Brianna didn’t trust anyone in the hospital anymore. She would be told she’s going to get better, today is the day. But it didn’t happen,” she said. “Amy worked with her to paint a visual symbol of establishing trust, what it looks like to unlock that precious sort of relationship.”

Before the album could be completed, Brianna passed away from complications of restrictive cardiomyopathy in 2014. Medina, who established Brianna’s H.O.PE. Fund to support arts programming in medical settings, funded the creation of the album, which was produced with help from Tina Mullen, director of the UF Health Shands Arts in Medicine program, and Dave Melosh, who owns Heartwood Soundstage.

“I want listeners to be touched and moved to support programs that ensure the arts remain in medical settings,” she said. “There has to be room for children to still be children within the medical model that exists today.”

Dealing with trauma at a tender age is not a foreign concept to Kendall, 36, who is from Stuart, Florida. He spent two and a half weeks in the hospital at age 6 after being injured in a car accident.

“I almost lost my life,” he said. “I still remember the taste of Jell-O mixed with oxygen tubes, the day they removed the staples from my chest and stomach, the nurse’s care and the friends who visited me.”

A veteran Gainesville performer of 16 years whose previous release was the 2015 album “Passing Chord,” Kendall was brought onto the Arts in Medicine team by former artist-in-residence and musician Danielle DeCosmo.

The program brings healing energy to patients in a unique, creative way that has nothing to do with beeping machines and scary procedures.

“Arts in Medicine gives kids the opportunity to remain kids,’’ said Mullen. “So often, we see kids become displaced through illness – separated from home, school, friends and pets, all the things they are familiar with. Allowing free creative expression brings forward their true spirit. It reminds them and their families about life outside of illness. They can just be themselves.”

“If you’re in a hospital tethered to a room, tethered to an IV, the loneliness and boredom are incredible,” he said. “Brianna was always making something, constantly keeping herself involved. Creating through Arts in Medicine allows kids like Brianna to express themselves. You look at their art and you see their fear, anxiety and hope. It’s a therapeutic way they can communicate and reflect on their circumstances.”

Bucciarelli, who is now an instructor at UF’s Innovation Academy, built therapeutic relationships with patients, providing them with psychological support and introducing them to artists-in-residence such as Kendall when she believed they could benefit from some fun and lightness.

“Maybe it was to make their songwriting dreams come true or to help a song unfold about their hopes,’’ she said. “The magic of the arts therapist working with the artist-in-residence was that I could hold a safe, therapeutic space for the patient while the artist used their talents to inspire a deep level of creative expression. That’s why the songs on this album are so moving and powerful. Ricky has a gift for connecting with patients. He can really pull the creative juices out of them.”

Kendall said by performing songs or drawing with patients he is giving what he has to give in the best possible way. He recalled surprising Brianna on her birthday by performing her favorite songs from the “Frozen’’ soundtrack. It was a profoundly meaningful moment, he said.

“It’s hard to heal by yourself,’’ he said. “This album is a companion to make a hospital stay seem less strange and more familiar and comforting. Art can be a way for people to make peace with trauma or loss.”

Bucciarelli said her practice has proven art’s ability to empower, giving patients like Brianna a sense of control and humanity.

“It was so valuable to give Brianna that sweet spot in her day to make art with me. It gave her strength and energy to move forward with the difficult things she had to go through,” she said. “For someone who’s sick, whose decisions and freedoms have been taken away from them because they need to stay in the hospital, art is something they can physically do.”

Art also creates a legacy for those who leave this world too soon, a collection of tangible memories that loved ones can return to, Kendall said.

“The Medina family is able to have this song and these paintings. This is Brianna’s legacy,” he said. “Even when you’re at your final time, you can still create some of the most brilliant colors you could’ve ever made. Brianna did just that. It’s a beautiful thing.”

Mullen recalled the Heartwood concert as a night of pure celebration.

“There were about 100 families there and kids running all over the place,’’ she said. “I was especially touched to see Brianna's family standing in front of the stage recording on their phone as Ricky played ‘Thankful for Love.’ It's not the first time they've heard it, but hearing it at such a joyous event was fulfilling for them.”

Standing with her family the night of the concert, Maria Medina said listening to Kendall sing Brianna’s lyrics makes her feel close to her daughter.

“We can’t stop children from getting sick, but we can give them time and space to work on their sense of inner healing and to process their own health journey,’’ she said. “When Brianna was making art through music or narrative, for that moment, she was able to separate from her sickness. She could be herself.’’

Maria Medina has a photo of her daughter pinned to her sweater. Every so often she adjusts the pin, as if to ensure Brianna’s smiling face is still near her own heart.

“Brianna’s voice is still being heard though this song,’’ she said.

Before joining the UF Health staff in 2016, Tyler regularly contributed to The Gainesville Sun and Gainesville Magazine. She graduated from the University of Florida in 2011 with a bachelor’s... END_OF_DOCUMENT_TOKEN_TO_BE_REPLACED