For more information on our ongoing response to COVID-19 in Gainesville, Jacksonville and Central Florida, visit our coronavirus website. END_OF_DOCUMENT_TOKEN_TO_BE_REPLACED

UF alum tackles cancer in the heart of the Gator Nation 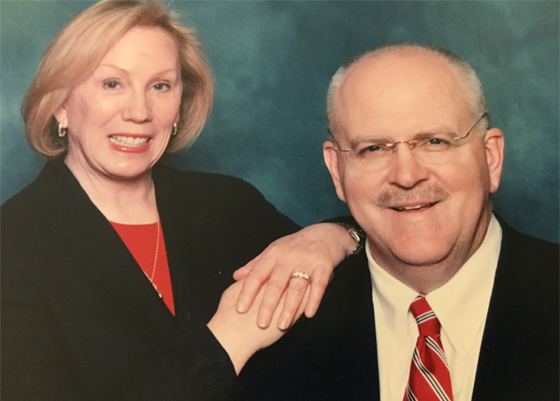 Travis Rockey, 67, and Gail, his wife of 43 years, spend their days in retirement serving others.

"We believe that service to others is a critical part of giving back," Travis said.

In January 2013, Travis decided to retire in June from his position as president and chief operating officer of a privately held media company headquartered in Charleston, South Carolina where he worked for 30 years. One morning, he discovered a swollen lymph node in his neck while shaving. He had it checked out and the diagnosis was sobering: squamous cell carcinoma, a head and neck cancer caused by the Human Papilloma virus, or HPV 16. He moved up his retirement to late April and began cancer treatment in May. Travis finished treatment on Sept. 1, 2013 after three rounds of chemo and 33 rounds of radiation.

Upon completion of his treatment, Travis and Gail took extra precautions to monitor their health by scheduling visits with their primary care physicians and specialists before moving from Charleston to a home they owned in Mount Dora, Florida. Travis and Gail were given the green light until Travis' final appointment with his urologist. Travis' physician noticed that while his prostate-specific antigen, or PSA, a blood test that screens for prostate abnormalities, including prostate cancer, was low and had not changed for years, the physical exam suggested there may be cause for concern. Since Travis and Gail were moving to Florida, Travis' urologist recommended follow-up care by Li-Ming Su, M.D., the David A. Cofrin professor of urologic oncology and chair of the UF College of Medicine's department of urology.

In early November, Travis traveled to Gainesville to meet with Su. During Travis' physical exam, Su identified a prostate nodule. This, in addition to the rise in his PSA test, led Su to perform a prostate biopsy. 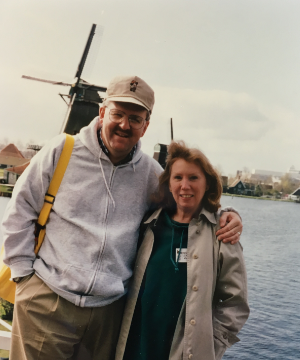 "Dr. Su said, 'The bad news is you have cancer. The good news is you have a Gleason 6,'" Travis said. The Gleason rating system ranks different grades of prostate cancer severity, with 6 being the lowest grade of aggressiveness and least likely to spread. Travis' immediate reaction was that the cancer was spreading. Su assured him that was not the case and that the two cancers were unrelated.

"There's no way to describe what happens to you when a doctor tells you that you have cancer, or as I call it, puts the 'C' behind your name," Travis said. "Your whole world changes in an instant. The things you are thinking and planning vanish. You move to the moment. Even after treatment, when there is no evidence of cancer, every time you have a sore throat or pain, or don't feel good, in the back of your mind you wonder if the cancer is back."

Since Travis was treated at an outside facility for the previous cancer and was making quarterly visits for checkups, he received a second opinion from a radiological oncologist during one of his scheduled visits. After weighing each option for treatment: doing nothing, surgery and radiation, the possible side effects of each and discussing them in depth with Su, Travis elected surgery at UF Health Shands Hospital.

"Mr. Rockey did precisely what all men who are diagnosed with prostate cancer should do. He did his research and even got a second opinion," Su said. "Having already survived cancer once before, Travis knew that gaining a complete and thorough understanding of his treatment options and potential side effects would mentally prepare himself for the journey ahead."

"I just wanted the tumor out so I opted for the surgery," Travis said.

On Feb. 24, 2014, Su performed a nerve-sparing robotic prostatectomy surgery to remove the cancerous prostate gland, while delicately preserving the nerves and surrounding muscles responsible for sexual and urinary function. Travis stayed one night at the hospital and, seven days later, returned to Su's office for a follow-up appointment.

"From a surgical standpoint, it was just what I expected," Travis said. "The margins had not been invaded by cancer. Dr. Su did a terrific job with the surgery. Follow up was excellent. Dr. Su said my prognosis was excellent."

As time moved on, Travis had a six-month and annual checkups for both cancers. He moved into the survivors program at the medical facility that treated his head and neck cancer, and expects to do the same at UF Health in February 2019.

"Travis has done especially well following his surgery, perhaps better than most as not only has he been cured of his cancer, but also his physiological functions have returned back to baseline," Su said.

Since his treatment and diagnoses, Travis has made it a priority to connect with other cancer patients and start a conversation, especially with those who are new to a cancer diagnosis.

"Never let cancer define you, it is just something you have," Travis said. "Look forward, don't look back. Every day is a gift, enjoy it."

Travis and Gail are snowbirds, splitting their time between Gainesville and Flat Rock, North Carolina. Travis shoots trap at Gator Skeet and Trap, volunteers with his Delta fraternity chapter at the University of Florida, is a part of the UF College of Journalism and Communications advisory board - his alma mater, and volunteers with Service Core of Retired Executives, or SCORE. Gail volunteers as a reading tutor and, in 2017, tutored a woman from Colombia to pass an American citizenship exam.

In August 2017, Travis and Gail moved from Mount Dora to Gainesville.

"We moved to Gainesville because of UF Health," Travis said. "It's great to be back in The Gator Nation for the second half of our lives."

"Travis' determination and conviction to overcome two separate cancers is extremely inspiring to me as a physician," Su said. "Moreover, I am moved by his commitment to serve others through sharing his storing and educating others about the importance of prostate cancer screening. He is truly a special patient and individual."