UF Health to resume elective surgeries, procedures on Monday, May 4. For more information on our ongoing response to COVID-19 in Gainesville, Jacksonville and Central Florida, visit our coronavirus website. END_OF_DOCUMENT_TOKEN_TO_BE_REPLACED

UF Health Shands Hospital ranked one of the nation's and region's top hospitals for
gynecology by U.S. News & World Report.

Cervical cancer is cancer that starts in the cervix. The cervix is the lower part of the uterus (womb) that opens at the top of the vagina. 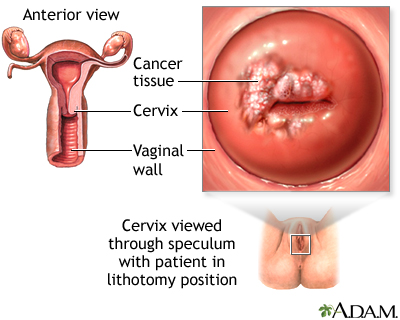 Worldwide, cervical cancer is the third most common type of cancer in women. It is much less common in the United States because of the routine use of Pap smears. 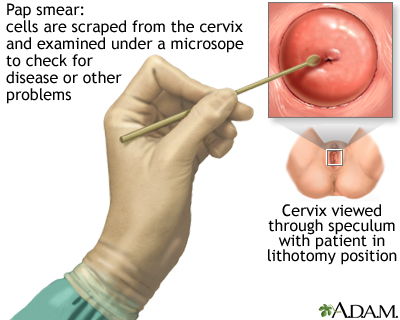 Almost all cervical cancers are caused by human papillomavirus (HPV). HPV is a common virus that is spread through skin-to-skin contact and also by sexual intercourse. There are many different types (strains) of HPV. Some strains lead to cervical cancer. Other strains can cause genital warts. Others do not cause any problems at all.

A woman's sexual habits and patterns can increase her risk of developing cervical cancer. Risky sexual practices include:

Other risk factors for cervical cancer include:

Most of the time, early cervical cancer has no symptoms. Symptoms that may occur include:

Precancerous changes of the cervix and cervical cancer cannot be seen with the naked eye. Special tests and tools are needed to spot such conditions: If cervical cancer is diagnosed, the provider will order more tests. These help determine how far the cancer has spread. This is called staging. Tests may include:

Treatment of cervical cancer depends on:

Early cervical cancer can be cured by removing or destroying the precancerous or cancerous tissue. This is why routine Pap smears are so important to prevent cervical cancer, or catch it at an early stage. There are surgical ways to do this without removing the uterus or damaging the cervix, so that a woman can still have children in the future.

Types of surgery for cervical precancer, and on occasion, very small early cervical cancer include:

Treatment for more advanced cervical cancer may include:

Radiation may also be used to treat cancer that has returned.

Chemotherapy uses drugs to kill cancer. It may be given alone or with surgery or radiation.

You can ease the stress of illness by joining a cancer support group. Sharing with others who have common experiences and problems can help you not feel alone.

How well the person does depends on many things, including:

Call your provider if you:

Cervical cancer can be prevented by doing the following: