For more information on our ongoing response to COVID-19 in Gainesville, Jacksonville and Central Florida, visit our coronavirus website. END_OF_DOCUMENT_TOKEN_TO_BE_REPLACED

A colorectal polyp is a growth on the lining of the colon or rectum.

Polyps of the colon and rectum are most often benign. This means they are not a cancer. You may have one or many polyps. They become more common with age. There are many types of polyps.

Adenomatous polyps are a common type. They are gland-like growths that develop on the mucous membrane that lines the large intestine. They are also called adenomas and are most often one of the following:

Other types of polyps are:

A small number of people with polyps may also be linked to some inherited disorders, including:

Polyps usually do not have symptoms. When present, symptoms may include:

The health care provider will perform a physical exam. A large polyp in the rectum may be felt during a rectal exam.

Most polyps are found with the following tests: 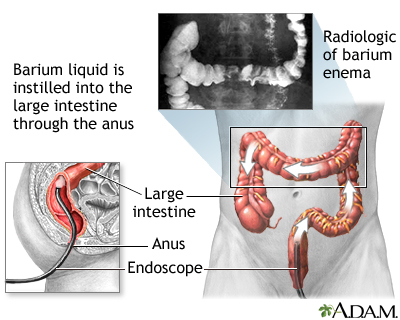 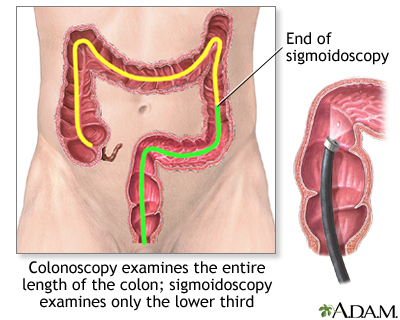 Colorectal polyps should be removed because some can develop into cancer. In most cases, the polyps may be removed during a colonoscopy.

For people with adenomatous polyps, new polyps can appear in the future. You should have a repeat colonoscopy usually 1 to 10 years later, depending on:

In rare cases, when polyps are very likely to turn into cancer or too large to remove during colonoscopy, the provider will recommend a colectomy. This is surgery to remove part of the colon that has the polyps.

Outlook is excellent if the polyps are removed. Polyps that are not removed can develop into cancer over time.

To reduce your risk of developing polyps:

Your provider can order a colonoscopy or other screening tests:

Taking aspirin, naproxen, ibuprofen, or similar medicines may help reduce the risk for new polyps. Be aware that these medicines can have serious side effects if taken for a long time. Side effects include bleeding in the stomach or colon and heart disease. Talk with your provider before taking these medicines.