The ear canal is lined with hair follicles. The ear canal also has glands that produce a waxy oil called cerumen. The wax will most often make its way to the opening of the ear. There it will fall out or be removed by washing.

Wax can build up and block the ear canal. Wax blockage is one of the most common causes of hearing loss. 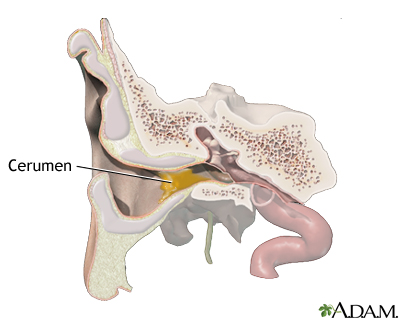 Wax blockage in the ear

Ear wax protects the ear by:

In some people, the glands produce more wax than can be easily removed from the ear. This extra wax may harden in the ear canal and block the ear, causing an impaction. When you try to clean the ear, you may instead push wax deeper and block the ear canal. For this reason, health care providers recommend against trying to reach into your own ear to clean it.

Some of the common symptoms are:

Most cases of ear wax blockage can be treated at home. The following remedies can be used to soften wax in the ear:

Another method is to wash out the wax.

Ask your health care provider before doing it on your own.

To avoid damaging your ear or causing an infection:

After the wax is removed, dry the ear thoroughly. You may use a few drops of alcohol in the ear or a hair dryer set on low to help dry the ear.

You may clean the outer ear canal by using a cloth or paper tissue wrapped around your finger. Mineral oil can be used to moisturize the ear and prevent the wax from drying.

Do not clean your ears too often or too hard. Ear wax also helps protect your ears. Never try to clean the ear by putting any object, such as a cotton swab, into the ear canal.

The ear may become blocked with wax again in the future. Hearing loss is often temporary. In most cases, hearing returns completely after the blockage is removed. Hearing aid users should have their ear canal checked for excess wax every 3 to 6 months.

Rarely, trying to remove ear wax may cause an infection in the ear canal. This can also damage the eardrum.

See your provider if your ears are blocked with wax and you are unable to remove the wax.

Also call if you have an ear wax blockage and you develop new symptoms, such as: