Gallstones are hard deposits that form inside the gallbladder. These may be as small as a grain of sand or as large as a golf ball. 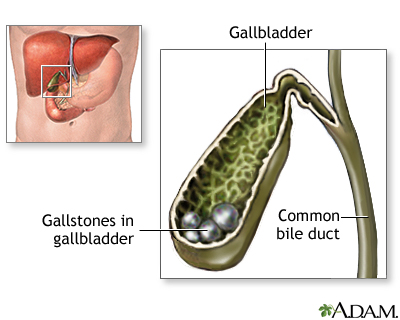 Gallstones are more common in:

Many people with gallstones do not have any symptoms. These are often found during a routine x-ray, abdominal surgery, or other medical procedure.

However, if a large stone blocks a tube or duct that drains the gallbladder, you may have a cramping pain in the middle to right upper abdomen. This is known as biliary colic. The pain goes away if the stone passes into the first part of the small intestine.

Symptoms that may occur include:

Other symptoms may include:

Tests used to detect gallstones or gallbladder inflammation include:

Your health care provider may order the following blood tests:

Most of the time, surgery is not needed unless symptoms begin. However, people planning weight loss surgery may need to have gallstones removed before undergoing the procedure. In general, people who have symptoms will need surgery right away or soon after the stone is found.

Endoscopic retrograde cholangiopancreatography (ERCP) and a procedure called a sphincterotomy may be done to find or treat gallstones in the common bile duct.

Medicines may be given in pill form to dissolve cholesterol gallstones. However, these drugs may take 2 years or longer to work, and the stones may return after treatment ends.

Rarely, chemicals are passed into the gallbladder through a catheter. The chemical rapidly dissolves cholesterol stones. This treatment is hard to perform, so it is not done very often. The chemicals used can be toxic, and the gallstones may return.

Shock wave lithotripsy (ESWL) of the gallbladder has also been used for people who cannot have surgery. This treatment is not used as often as it once was because gallstones often come back.

You may need to be on a liquid diet or take other steps to give your gallbladder a rest after you are treated. Your provider will give you instructions when you leave the hospital.

The chance of symptoms or complications from gallstones surgery is low. Nearly all people who have gallbladder surgery do not have their symptoms return.

Blockage by gallstones may cause swelling or infection in the:

In most people, gallstones can't be prevented. In people who are obese, avoiding rapid weight loss may help prevent gallstones.