A pacemaker is a small, battery-operated device that senses when your heart is beating irregularly or too slowly. It sends a signal to your heart that makes your heart beat at the correct pace. This article discusses what you need to do to take care of yourself when you leave the hospital.

Note: Care of certain specialized pacemakers or pacemakers combined with defibrillators may be different than described below.

When You're in the Hospital

You had a pacemaker placed in your chest to help your heart beat properly.

Most pacemakers have only one or two wires that go to the heart. These wires stimulate one or more of the chambers of the heart to squeeze (contract) when the heartbeat gets too slow. A special type of pacemaker can be used for people with heart failure. It has three leads to help the heart beat in a more coordinated manner. 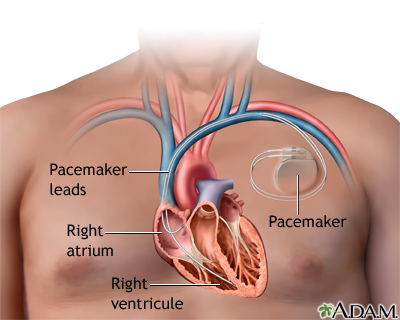 Some pacemakers also can deliver electric shocks to the heart that can stop life-threatening arrhythmias (irregular heartbeats). These are called "cardioverter defibrillators."

A newer type of device called a "leadless pacemaker" is a self-contained pacing unit that is inserted into the right ventricle of the heart. It does not need connecting wires to a generator under the skin of the chest. It is guided into place via a catheter inserted in a vein in the groin. Currently leadless pacemakers are available only for people who have certain medical conditions involving a slow heartbeat.

You should know what type of pacemaker you have and which company made it.

What to Expect at Home

You will be given a card to keep in your wallet.

Be Careful Around Things With Magnets

Most machines and devices will not interfere with your pacemaker. But some with strong magnetic fields may. Always ask your provider about any specific device that you need to avoid. Do not put a magnet near your pacemaker.

Most appliances in your home are safe to be around. This includes your refrigerator, washer, dryer, toaster, blender, computers and fax machines, hair dryer, stove, CD player, remote controls, and microwaves.

You should keep several devices at least 12 inches (30 centimeters) away from the site where the pacemaker is placed under your skin. These include:

Tell all providers that you have a pacemaker before any tests are done.

Some medical equipment may interfere with your pacemaker.

Stay away from large motors, generators, and equipment. Do not lean over the open hood of a car that is running. Also stay away from:

If you have a cell phone:

Be careful around metal detectors and security wands.

After any operation, have your provider check your pacemaker.

You should be able to do normal activities in 3 to 4 days.

For 2 to 3 weeks, do not do these things with the arm on the side of your body where the pacemaker was placed:

Do not lift this arm above your shoulder for several weeks. Do not wear clothes that rub on the wound for 2 or 3 weeks. Keep your incision completely dry for 4 to 5 days. Afterward, you may take a shower and then pat it dry. Always wash your hands before touching the wound.

Your provider will tell you how often you will need to have your pacemaker checked. In most cases, it will be every 6 months to a year. The exam will take about 15 to 30 minutes.

The batteries in your pacemaker should last 6 to 15 years. Regular checkups can detect if the battery is wearing down or if there are any problems with the leads (wires). Your provider will change both the generator and battery when the battery gets low.

When to Call the Doctor