The best way to prevent the spread of COVID-19 is to get vaccinated. You can get a vaccine in many places in your community. Find a walk-up location or schedule an appointment today. END_OF_DOCUMENT_TOKEN_TO_BE_REPLACED

Lyme disease is a bacterial infection that is spread through the bite of one of several types of ticks. 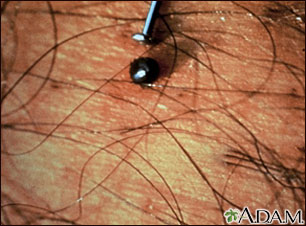 Tick - deer engorged on the skin

Lyme disease is caused by bacteria called Borrelia burgdorferi (B burgdorferi). Blacklegged ticks (also called deer ticks) can carry these bacteria. Not all species of ticks can carry these bacteria. Immature ticks are called nymphs, and they are about the size of a pinhead. Nymphs pick up bacteria when they feed on small rodents, such as mice, infected with B burgdorferi. You can only get the disease if you are bitten by an infected tick. 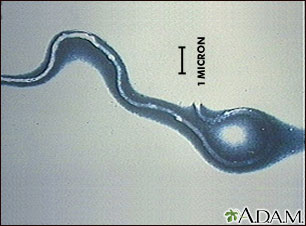 There are three stages of Lyme disease.

Risk factors for Lyme disease include: 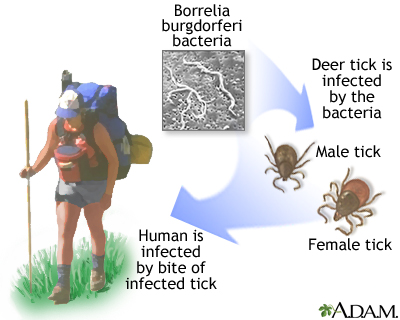 Symptoms of early localized Lyme disease (stage 1) begin days or weeks after infection. They are similar to the flu and may include:

There may be a "bull's eye" rash, a flat or slightly raised red spot at the site of the tick bite. Often there is a clear area in the center. It can be large and expanding in size. This rash is called erythema migrans. Without treatment, it can last 4 weeks or longer. 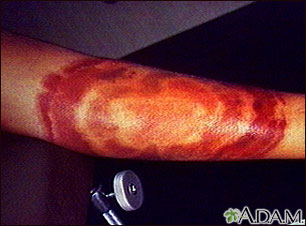 Symptoms may come and go. Untreated, the bacteria can spread to the brain, heart, and joints.

Symptoms of early disseminated Lyme disease (stage 2) may occur weeks to months after the tick bite, and may include:

Symptoms of late disseminated Lyme disease (stage 3) can occur months or years after the infection. The most common symptoms are muscle and joint pain. Other symptoms may include:

A blood test can be done to check for antibodies to the bacteria that cause Lyme disease. The most commonly used is the ELISA for Lyme disease test. An immunoblot test is done to confirm ELISA results. Be aware, though, in the early stage of infection, blood tests may be normal. Also, if you are treated with antibiotics in the early stage, your body may not make enough antibodies to be detected by blood tests.

In areas where Lyme disease is more common, your health care provider may be able to diagnose early disseminated Lyme disease (Stage 2) without doing any lab tests.

Other tests that may be done when the infection has spread include:

People bitten by a tick should be watched closely for at least 30 days to see if a rash or symptoms develop. 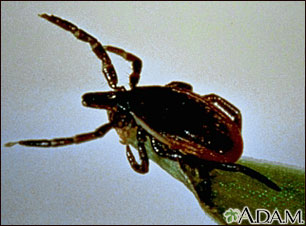 A single dose of the antibiotic doxycycline may be given to someone soon after being bitten by a tick, when all of these conditions are true:

A 10-day to 4-week course of antibiotics is used to treat people who are diagnosed with Lyme disease, depending on the choice of drug:

Pain medicines, such as ibuprofen, are sometimes prescribed for joint stiffness.

If diagnosed in the early stages, Lyme disease can be cured with antibiotics. Without treatment, complications involving the joints, heart, and nervous system can occur. But these symptoms are still treatable and curable.

In rare cases, a person keeps having symptoms that interfere with daily life after they have been treated with antibiotics. This is also known as post-Lyme disease syndrome. The cause of this syndrome is unknown.

Symptoms that occur after antibiotics are stopped may not be signs of active infection and may not respond to antibiotic treatment.

Stage 3, or late disseminated, Lyme disease can cause long-term joint inflammation (Lyme arthritis) and heart rhythm problems. Brain and nervous system problems are also possible, and may include:

Take precautions to avoid tick bites. Be extra careful during warmer months. When possible, avoid walking or hiking in the woods and areas with high grass.

If you do walk or hike in these areas, take measures to prevent tick bites:

If a tick is attached to you, follow these steps to remove it: