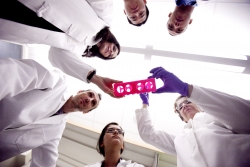 Tooth discoloration is, understandably, a concern and a research area for dentists.

Ever since her recent move into the Emerging Pathogens Institute, Ozlem Yilmaz, D.D.S., Ph.D., a dentist and associate professor in the College of Dentistry, doesn’t think it’s all that strange. Talking with plant pathologists in her building, she found out that the mouth bacteria she studies belong to the same group as those that cause greening, a disease that discolors and deforms citrus fruits and foliage. So the researchers formed an unlikely team, pooling their expertise to tackle the problem.

That scenario is playing out over and over across the Health Science Center as researchers ramp up cross-disciplinary efforts to answer tough questions in science and medicine. And the campus infrastructure is expanding in a way that ignites and fuels that kind of collaboration. New buildings such as the Biomedical Sciences Building, the Emerging Pathogens Institute and their slightly older sibling, the Cancer and Genetics Research Complex, have literally removed the walls that existed between researchers.

As experts in different disciplines mingle and basic scientists connect with clinical researchers and physicians, they forge new paths to discoveries that can rapidly move from laboratories to the patient care arena.

In the last several years, UF and the Health Science Center have seen hundreds of thousands of new square feet of research space dedicated to interdisciplinary research — and more is on the way.

Adequate, well-appointed space is key to attracting talented faculty and students, and research dollars. Funding agencies pay attention to whether universities have suitable facilities for projects outlined in grant proposals. The work those facilities allow influences how universities and research programs are perceived nationally and internationally.

“Without new space, it would be impossible to grow the research program in any substantial way,” said Win Phillips, D.Sc., UF’s vice president for research. “Our grant programs, research dollars and the output of our researchers are vitally dependent on it.”

In new facilities, Yilmaz and others like her have found room to expand the scope of their research. People who once were strangers now run into each other often, share ideas and frustrations, and end up as research partners.

“The ‘Good morning, how are you today?’ conversations can turn into really interesting ideas,” Yilmaz said.

Like a new project with her office and laboratory neighbor, Volker Mai, Ph.D., an assistant professor of microbiology and cell science in the Institute of Food and Agricultural Sciences.

“Before, I wouldn’t even think about this,” Mai said.

For Rosalind Sadleir, Ph.D., a research assistant scientist in the

J. Crayton Pruitt Family department of biomedical engineering, a move into the Biomedical Sciences Building put her steps away from clinical suites of the Health Science Center. She has more chance meetings with collaborators such as Edward Ross, M.D., an associate professor of nephrology in the College of Medicine, with whom she’s developing a device for detecting internal bleeding after blunt trauma, and an electrical method to tell when needles come loose during dialysis.

The communication boost is not just among faculty, but also postdoctoral fellows and graduate students.

Aaron Tucker, M.Sc., one of Sadleir’s students, has learned about how materials discarded after surgery can be used to engineer new tissues, simply because colleagues from a different research group work just a few benches away.

“As a student you learn more about other fields in a really informal way with your peers,” said Tucker, an electrical and biomedical engineer.

With his electronics expertise he has also been able to help a nearby group fix malfunctioning equipment, saving them money that could be used for other purposes.

“If one person knows something, many people can benefit,” he said.

UF and the Health Science Center have powered expansion by combining funds from a variety of sources, including federal and nonprofit foundation grants, private donations and stock sales. But state dollars top the list.

“The state of Florida has been visionary,” Phillips said. “Some states don’t build university buildings.”

In constructing the Biomedical Sciences Building, for example, the state picked up almost $85 million of the $90.5 million tab.

Under its director, Marco Pahor, M.D., the UF Institute on Aging won a $15 million grant from the National Institutes of Health via the American Recovery and Reinvestment Act of 2009, for an almost 40,000-square-foot building to be completed in 2015. UF decided to pitch in $30 million to add an 80,000-square-foot wing to house the Clinical and Translational Science Institute; the UF Clinical Research Unit; diabetes, muscular dystrophy and other clinical research programs; biostatistics, bioinformatics, epidemiology and clinical trial regulatory oversight headquarters; and a geriatric medicine multispecialty clinic.

“The complex will provide an academic home for clinical and translational science at UF,” said David Guzick, M.D., Ph.D., senior vice president for health affairs and president of the UF&Shands Health System. “It will be an incubator of patient-centered ideas and innovations that can only result when investigators from various fields work together.”

As the campus grows, it’s getting “greener” through the use of new materials and technologies that optimize energy and water use and reduce pollution.

The university is a signatory to the American College and University President’s Climate Commitment and scored an A in “Green Building” this year from the Sustainable Endowment Institute, an organization that monitors “green” practices at university campuses.

UF also leads all other universities nationally in terms of the number of “green” projects registered with the Leadership in Energy and Environmental Design, or LEED, program of the U.S. Green Building Council. LEED rankings range from certified to platinum plus, and UF requires that new projects go for gold, at a minimum.

Recently the Biomedical Sciences Building and the Shands Cancer Hospital earned LEED Gold. The hospital is the only one in the Southeast and one of four in the nation with that certification.

Some structures are being built with even higher ratings in mind. The Institute on Aging/Clinical and Translational Research Building complex is shooting for platinum plus, which means that the building has achieved “carbon neutrality” — no net gain in carbon use as a result of construction or occupancy.

These superior spaces translate to greater productivity for researchers and the university.

“We will continue to be at the forefront of scientific research and work hard to find space for our ever-growing endeavors,” Phillips said.

Science writer for University of Florida’s College of Medicine. Before joining UF in 2008, Czerne was the health and science writer at The State newspaper in Columbia, South Carolina. In... END_OF_DOCUMENT_TOKEN_TO_BE_REPLACED