Got statins? UF cardiologists recommend new use for old drug 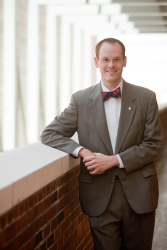 Cardiologists at the University of Florida are pointing to a new use for an old therapy. Giving patients cholesterol-lowering statins before surgery and other invasive procedures can halve the risk of heart attacks, deaths and other complications, they report in the Journal of the American College of Cardiology.

“The magnitude of benefit we found in terms of reducing mortality, post-procedure myocardial infarctions and reduction in atrial fibrillation after bypass surgery is really quite large,” said first author David Winchester, M.D., a cardiology fellow in the College of Medicine’s department of medicine. “If you look at some of the other interventions we use, such as using beta blockers before surgery, you don’t get nearly the kind of benefit that we are seeing with using statins prior to procedures. That is very surprising.”

The results strongly support the routine use of statin therapy before invasive procedures, experts say.

Statins are known for their ability to lower cholesterol. But a different mechanism is at play in reduction of postsurgery complications. Although researchers have not pinpointed the specifics, they have clues about how statins work to benefit patients after surgery.

After invasive procedures such as coronary artery angioplasty, coronary bypass surgery or major vascular surgery, the risk of heart attack is raised thanks to a combination of factors. Just the act of inserting wires and catheters directly into major blood vessels can cause physical damage to those vessels or dislodge unstable plaques that then travel in the bloodstream and restrict blood flow to the very artery that cardiologists and surgeons are trying to mend.

In addition, as blood vessels try to minimize the impact of the damage, various inflammation-causing hormones and bioactive compounds are released into the circulation.

So statins may work to reduce the risk of cardiac events after surgery by stabilizing plaques and decreasing inflammation, the researchers speculate. Statins also appear to contribute to the overall health of the coronary artery.

The researchers, led by Anthony A. Bavry, M.D., M.P.H., pulled together previously published data on more than 4,800 patients from 21 different randomized, controlled trials that investigated the use of statin therapy before invasive procedures.

Called a meta-analysis, the pooling and re-analyzing of data from several individual studies allowed the researchers to study the effects of statin use on a much larger scale than would be feasible in a single study. Such a large study population enables researchers to draw stronger conclusions about the value and relative benefit of the therapy.

“The analysis is really compelling — it should be the final nail to convince people that we need to do this. What are we waiting for?” said Kim A. Eagle, M.D., the Albion Walter Hewlett professor of internal medicine and director of the University of Michigan Cardiovascular Center, who was not involved in the current study. “I’m hopeful this will convince caregivers that this is not an accident, but that it’s a physiology that’s understandable and we need to do this.”

Eagle, who wrote an editorial comment in the journal addressing the UF study, led the development of the American College of Cardiologists and American Heart Association guidelines regarding cardiac risk of noncardiac surgery, and the guidelines for coronary artery bypass surgery.

Eagle said he would like to see statin therapy become part of standard care of every patient who will have invasive procedures performed.

“We should be giving high doses of statins to all patients before coronary bypass and certainly before angioplasty,” he said.

While the researchers do not anticipate that fellow physicians will resist adopting the new practice, they acknowledged concerns about potential side effects such as raising liver function test levels and causing muscle breakdown. But such effects are infrequent — and minor when they do occur — the researchers said.

“Overall, the drugs are safe, and don’t have much downside. They are readily accessible and easy to take before a procedure,” Winchester said. “If it is built into people’s routine it should be relatively easy to accomplish in the real world.”

He already has incorporated the therapy into his own practice.

To encourage universal adoption of the measure, Eagle said, he would like to see it included in national surgical guidelines and quality-of-care performance measures used by Centers for Medicare and Medicaid Services and other agencies.

“It should become a reflex that for everyone having these procedures people stop and say, ‘Have they gotten their statins?’” Eagle said.

The study was funded by the Florida Heart Research Institute.

Science writer for University of Florida’s College of Medicine. Before joining UF in 2008, Czerne was the health and science writer at The State newspaper in Columbia, South Carolina. In... END_OF_DOCUMENT_TOKEN_TO_BE_REPLACED