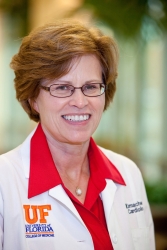 Dr. Marian C. Limacher has been named senior associate dean for faculty affairs and professional development for the University of Florida College of Medicine.

In this new role, Limacher will focus on implementing college-wide programs that help faculty advance in their professional careers. She also will oversee initiatives to update promotion and tenure processes, enhance diversity of college faculty, and implement orientation, educational, mentoring and recognition programs that aim to improve faculty satisfaction, well-being and performance.

“Dr. Limacher is uniquely suited for this position. She is an accomplished physician-scientist and educator who has personally excelled in all College of Medicine mission areas,” said Dr. Michael L. Good, the dean of the college and the Folke H. Peterson dean’s distinguished professor.

As the Suncoast endowed professor in cardiovascular research, Limacher is nationally known for her work to prevent cardiovascular disease, particularly in women and the elderly. She also directs the UF Clinical and Translational Science Institute’s Clinical Research Training and Career Development Program. In addition, she chaired the Faculty Forward Task Force, which directed the administration, analysis and communication of an extensive faculty satisfaction survey for the college from 2009 to 2010.

Limacher has played an instrumental role in the Women’s Health Initiative, serving as principal investigator for UF’s Clinical Center in this landmark study, which focuses on preventing heart disease, breast and colorectal cancer, and osteoporotic fractures in postmenopausal women. The study’s findings on hormone treatment have changed clinical practice. Other related work has focused on rural health and lifestyle interventions.

A graduate of the St. Louis University School of Medicine, Limacher completed an internship in medicine, her residency in internal medicine and a fellowship in cardiology at Baylor College of Medicine Affiliated Hospitals in Houston. She is board-certified in internal medicine and in cardiovascular disease She also is certified by the National Board of Echocardiography.

An active clinician and mentor, Limacher is an attending cardiologist at Shands at UF.

She began her career as an instructor of medicine in cardiology at the Baylor College of Medicine, and served as director of the Non-Invasive Cardiology Laboratory at Ben Taub General Hospital in Houston. In 1984, she joined the UF faculty as an assistant professor of medicine in the division of cardiology. Over the next 26 years she held many leadership positions, including director of the Non-Invasive Cardiology Laboratory at the Malcom Randall Veterans Affairs Medical Center from 1984 to 1999; acting medical director of the Cardiac Transplant Program at Shands at UF from 1989 to 1990; a joint faculty appointment with the department of exercise and sport sciences at the College of Health and Human Performance; and chief of cardiology for the VAMC.

She was promoted to professor of medicine in 1997, and holds a joint appointment in the department of physiology. She was medical director of the Cardiovascular Clinic at Shands from 2006 until earlier this year.

Limacher has received many accolades throughout her career. She is the recipient of the prestigious Paul Dudley White Award of the Association of Military Surgeons of the United States, “in recognition of an outstanding career and devotion to advances in cardiac care serving as the standard by which others may measure excellence.”

She is the 1996 recipient of the UF chapter of the American Medical Women’s Association “Gender Equity Award,” for promoting a gender-fair environment for the education and training of women to study and practice medicine. In 2000 she received the UF College of Medicine’s Research Prize in Clinical Science. She was elected to membership in the American Clinical and Climatological Association (2000) and to the Southern Society for Clinical Investigation (2009). She is listed among the Best Doctors in America.

In addition, she is a past member of the National Heart, Lung, and Blood Institute’s Board of Extramural Advisors and of the NIH’s Advisory Committee on Research on Women’s Health, and serves on numerous NIH peer review panels. At the state level, Limacher has served as a member of the Health Committee of the Florida Commission on the Status of Women and as an appointee to the Governor’s Women and Heart Disease Task Force.

“Everything the UF College of Medicine achieves is accomplished by its faculty,” Good said. “While laser focus on our missions of patient care, research and education is critical to the success of our college, it’s also time that we focused equally on professional development of our faculty. In this newly created COM position, Dr. Limacher will provide leadership for that effort.”

Chief communications officer for UF Health. She also serves as senior producer and managing editor for the public radio program Health in a Heartbeat, overseeing operations for the nationally aired... END_OF_DOCUMENT_TOKEN_TO_BE_REPLACED