For more information on our ongoing response to COVID-19 in Gainesville, Jacksonville and Central Florida, visit our coronavirus website. END_OF_DOCUMENT_TOKEN_TO_BE_REPLACED

Immune system cells called macrophages spring into action to surround and destroy threats such as viruses or cancer cells. But sometimes the would-be protective response leads to persistent inflammation, which, in turn, can cause disease.

Scientists don’t know exactly how macrophages cross the line from being good cops to bad cops, but researchers at the University of Florida recently unearthed several clues about the mechanisms involved. Through the lens of two inflammation-related diseases, HIV and rheumatoid arthritis, they identified changes in specific proteins linked to the action of macrophages, white blood cells that are key to the body’s natural defenses.

The findings could lead to new early diagnosis tools and targeted therapy for diseases that stem from abnormal or uncontrolled macrophage activation, including cancer, cardiovascular disease and neurological disorders. 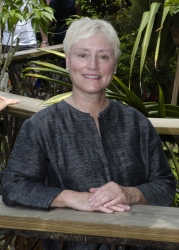 “Macrophage activation is important because it is involved in inflammation, which is involved in a number of diseases,” said molecular biologist Maureen Goodenow, Ph.D., the Stephany W. Holloway university chair in AIDS research and professor of pathology, immunology and laboratory medicine in the UF College of Medicine, who led the research. “Chronically inflamed macrophages can be a problem for human health.”

With the advent of powerful antiretroviral therapies, people infected with HIV now survive for decades without progressing to AIDS. Even so, they battle inflammatory conditions such as HIV-associated dementia and cardiovascular disease.

One cause of macrophage activation that researchers are exploring is microbial translocation — the spilling of parts of intestinal microbes into the blood circulation. Researchers have proposed that bacterial products thus released can activate immune system T cells and in so doing lead to the progression to AIDS.

One of those pathogen-related molecules spilled into the blood is called LPS. In studies of plasma and blood cells from people infected with HIV, the UF team investigated whether the amount of the substance present was associated with how quickly HIV progressed to AIDS. They found no correlation between levels of the substance and depletion of T cells, the hallmark indicator of AIDS. Instead, they found that it was associated with activation of macrophages and their precursor cells, and with inflammation that persisted even after anti-viral therapy. 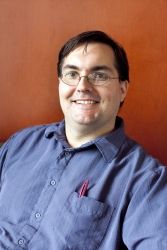 Mark Wallet, Ph.D., an immunologist and postdoctoral (Photo by Maria Farias/University of Florida)

“This sets the stage to start teasing apart the relative contributions of different causes for immune activation in people with HIV,” said Mark Wallet, Ph.D., an immunologist and postdoctoral researcher who is first author of two of the papers. “We can eventually use that information to better treat HIV-infected individuals by targeting the inflammation that causes so many long-term illnesses.”

The researchers turned to rheumatoid arthritis to study the role of another molecule called interferon gamma. Produced in inflamed joints, it sets off an immune system process that is completed by a compound found in the natural lubrication fluid of joints. That compound has been shown to inhibit inflammation.

But it might also promote inflammation, the UF team has now shown. They found that in the presence of interferon gamma, the compound acted on macrophages to elevate production of two inflammation-causing proteins and suppress a protein that usually regulates normal immune cell responses.

“We’re striving to dissect the initiating events that lead to chronic inflammation,” Wallet said. “Immune cell activation and inflammation can become self-sustaining processes that are difficult to silence once a disease has progressed too far.”

The researchers learned more about the roles of LPS and interferon gamma through a technique called proteomics, which gives a wealth of information that allows researchers to pinpoint specific changes within cells. It is a major shift from previous methods that rely on measuring secretions or biomarkers produced as a result of unspecified changes in cells.

“It’s kind of like molecular archeology. We’re getting pieces of a puzzle and trying to reconnect things in a biological context to infer what caused these events and get a better idea of what to focus on for future studies,” said Joseph Brown, Ph.D., first author of one of the papers, who now works at Pacific Northwest National Laboratory in Richland, Wash. “What we’re trying to do is better understand why the immune system is so off course, so exaggerated.”

“This type of work is really critical to identifying specific fingerprints — target proteins that could be either enhanced or suppressed,” said Luis Montaner, D.V.M., M.Sc., D. Phil., editor-in-chief of the Journal of Leukocyte Biology and a professor of immunology at The Wistar Institute, who was not involved in the studies. “Getting a clear definition of what that means in the protein expression site can give the ability to target those proteins rather than the whole sequence.”

Science writer for University of Florida’s College of Medicine. Before joining UF in 2008, Czerne was the health and science writer at The State newspaper in Columbia, South Carolina. In... END_OF_DOCUMENT_TOKEN_TO_BE_REPLACED