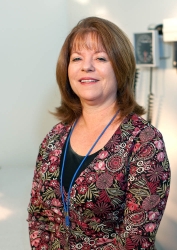 Kathleen Ryan, M.D., of the department of pediatrics at the University of Florida College of Medicines poses in her office at UF Health Science Center on Wednesday, March 2, 2011. She led a study that found MRSA dangers in gymnasiums may be exaggerated.(Photo by Jesse Jones/University of Florida)

A sweat-drenched treadmill seems a likely haven for germs to set up housekeeping, including the dangerous antibiotic-resistant bug MRSA. This is one of the reasons why most fitness centers sanitize equipment and supply members with antibacterial wipes.

But these aggressive cleaning policies may not actually be necessary to prevent the spread of community-acquired form of methicillin-resistant Staphylococcus aureus, according to a new University of Florida study published today (March 3) in the American Journal of Infection Control.

UF researchers found no trace of MRSA on fitness equipment or even floor mats in three community gyms, where they collected samples. This finding supports the notion that MRSA may be more likely to pass from skin to skin than from surfaces to skin, says Kathleen Ryan, M.D., a clinical assistant professor of pediatrics in the UF College of Medicine.

“We have an increasing incidence of MRSA in the community, and we are looking for the sources of infection,” Ryan said. “The assumption was we would find a lot of MRSA on the equipment, and if people have an abrasion on their skin, that contact could lead to infection.

“This is very surprising.”

According to the Centers for Disease Control and Prevention, about 30 percent of people carry Staph bacteria on their bodies; however, only 2 percent have MRSA, which is resistant to many common antibiotics. The community-acquired form of MRSA accounts for about 14 percent of cases, and children and athletes are more likely than most people to become infected, according to the CDC.

The researchers tested 240 samples collected from equipment housed in three area gyms, including a university gym, a community fitness center and a high school gym. They swabbed the equipment at different intervals, capturing samples on places people are more likely to touch, such as handles. They specifically looked at cardio machines, barbells, benches and weight machines.

“All the gyms have a high user rate,” Ryan said. “If (MRSA) had been there we believe we would have found it.

“People have almost gotten to the point where they don’t want to touch anything anymore. I think we can relax a little. I don’t think we need to feel like everything we touch is some bad thing that is going to give us disease.”

Researchers strategically selected three gyms to test in order to represent a cross section of the community and to collect samples from equipment in centers with different policies and procedures. The high school, for example, did not provide sanitizing wipes to students who used the equipment as the university and community center did, Ryan said.

Although being continually touched by sweaty people seems like it would beckon bacteria, it may be that the hard surfaces of gym equipment just don’t provide an enticing enough environment for germs to set up long-term residence.

“Bacteria can grow on a lot of surfaces but they need a substrate to grow on, like oils and other proteins and skin. It may be that solid surfaces just don’t have enough stuff on them,” Ryan said. “A couple studies found MRSA in wetter areas around sinks and on towels.”

While the study provides reassurance that some surfaces and areas may not harbor the high levels of contamination that people imagine, Aaron Milstone, M.D., of Johns Hopkins University, cautions that more sensitive testing measures may reveal lower levels of MRSA contamination on gym surfaces.

“It is another provocative piece of the puzzle in the role the environment plays in the transmission of Staph aureus between people,” said Milstone, an assistant professor of pediatric infectious diseases and a hospital epidemiologist at Johns Hopkins Children’s Center, who was not associated with study.

The researchers say more testing is needed to confirm the findings, and they are now investigating surfaces in child-care settings to see if they detect MRSA.