UF Health to resume elective surgeries, procedures on Monday, May 4. For more information on our ongoing response to COVID-19 in Gainesville, Jacksonville and Central Florida, visit our coronavirus website. END_OF_DOCUMENT_TOKEN_TO_BE_REPLACED

In the quest to cure Type 1 diabetes, scientists must develop better research standards 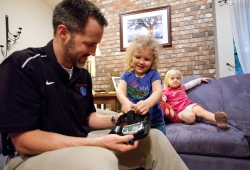 A cure for Type 1 diabetes has been the holy grail of researchers worldwide since the first clinical trials seeking to cure the disease began some three decades ago. But despite many advances, the target still seems just out of reach. That point was made frustratingly clear for scientists worldwide this year when several clinical trials that had held great promise based on laboratory studies yielded disappointing results.

A lack of universal standards for defining diabetes and reversal of the disease in animal studies makes it difficult to translate laboratory successes into human trials, said Mark A. Atkinson, Ph.D., an eminent scholar in the University of Florida College of Medicine’s department of pathology, immunology and laboratory medicine and co-director of the UF Diabetes Center of Excellence.

In a commentary appearing Wednesday (Aug. 17) in the journal Science Translational Medicine, Atkinson proposes criteria on which the scientific community can hinge discussions aimed at building a consensus and forging a foundation for more successful human trials.

“We haven’t given up, we need to keep moving forward with as much passion as ever,” Atkinson said. “It’s halftime and we have to go to the locker room and figure out what we have to do better to win the game.”

More than 1 million people in the United States live with Type 1 diabetes, according to the Centers for Disease Control and Prevention. More than 30,000 new cases of Type 1 diabetes are diagnosed each year.

In Type 1 diabetes, the body’s immune system attacks insulin-producing cells in the pancreas whose job is to move glucose out of the blood so it can be converted to energy. Glucose then accumulates in the blood, causing organ damage. People who have the disease must take insulin injections to survive. But insulin is not a cure and does not prevent complications such as blindness, kidney disease and heart disease.

There is a window for attack early in the course of the disease. People who are newly diagnosed with Type 1 diabetes have residual insulin-producing cells that might still be functional, and researchers have focused on trying to save those cells and coax them to produce enough insulin. The development of new molecular-based therapies has energized the field over the years.

A host of laboratory studies have paved the way for clinical trials in humans. But without better animal models and a standardized way to define the disease or its reversal in those models it has been difficult to develop an effective clinical strategy. Individual researchers have been free to decide in their own animal studies what blood sugar levels over what time frame indicate diabetes, how long to administer therapies being tested, how many animals to treat, what represents a cure, and other variables. And some researchers have tested new therapies along with insulin — standard therapy in newly diagnosed Type 1 diabetes in humans — while others did not use insulin. At present there are about 50 published ways to reverse diabetes and more than 300 ways to prevent it in mice.

In contrast, in clinical practice, there is a precise definition of diabetes that all physicians use to diagnose the condition. In addition, clinical researchers have worked diligently over the last decade to develop standards for quality trial design, including methods that allow comparison of results obtained using different drugs.

“If we can do that for humans I think we can do this for animals — and yet we haven’t done it,” said Richard A. Insel, M.D., chief scientific officer of the Juvenile Diabetes Research Foundation, who was not involved in the current analysis. “People use the words ‘cure’ and ‘reversal’ very loosely — we should never be talking about curing mice unless we have a strict definition of what a cure represents.”

Implementing standards could help advance research efforts, because laboratory studies could be compared more easily. That would enable only the most promising methods to proceed to human trial, and in so doing, ease emotional turmoil and stress for patients, families and investigators, reduce the number of animals used in laboratory studies, and cut costs. On average, Type 1 diabetes reversal trials cost $20,000 to $40,000 per patient.

Atkinson’s suggestions for standardizing diabetes reversal studies include establishing a minimum number of animals used, defining control groups, limiting the age of specimens used, and standardizing the time from the onset of high blood sugar to the start of treatment.

He also calls for the definition of diabetes to be based on blood rather than urine measurements, establishment of a specific blood glucose concentration as the threshold for diabetes onset, and agreement on whether insulin therapy should be used after diagnosis.

Lastly, Atkinson proposes that all studies report blood glucose level at the time treatment starts, adopt a universal definition of reversal of diabetes, and determine a standard length of time that animals must be monitored to make sure there is true disease reversal.

Neutral bodies such as the National Institutes of Health and funding organizations such as the Juvenile Diabetes Research Foundation can help to guide the standardization process.

“I’m hopeful that within six months to a year from now that the field moves toward this,” Atkinson said.

Science writer for University of Florida’s College of Medicine. Before joining UF in 2008, Czerne was the health and science writer at The State newspaper in Columbia, South Carolina. In... END_OF_DOCUMENT_TOKEN_TO_BE_REPLACED