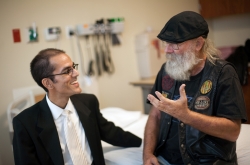 Christopher R. Cogle, M.D., an associate professor of hematology and oncology in the UF College of Medicine, talks with Kim White, who is being treated for a blood disorder known as MDS. (Photo by Maria Farias/University of Florida)

A group of life-threatening blood disorders collectively called myelodysplastic syndrome, or MDS, may occur four times more often than reported by national cancer registries, according to new research from the University of Florida based on data from Medicare claims.

MDS occurs when the body’s blood factory does not produce healthy red or white blood cells or platelets. Getting a more accurate picture of the disease could lead to earlier diagnosis for patients and better guidance for public health policy. The findings, reported in the November issue of the journal Leukemia Research and in an earlier issue of the journal Blood, indicate that more women than men are overlooked.

“The data from the cancer registry is showing us a partial picture of MDS,” said Christopher R. Cogle, M.D., an associate professor of hematology and oncology in the UF College of Medicine’s department of medicine. “State cancer registries, which feed the national registries, need more resources so they can more comprehensively capture this disease and others, such as skin and gastrointestinal cancers.”

MDS is a hard-to-diagnose disease that presents itself in a wide range of ways. On the less severe end of the spectrum, it shows up as a low blood cell count, and, at the other extreme, as leukemic growths inside the bone marrow.

Seventy percent of people with MDS die of complications related to a low blood cell count. Even with low-grade disease, the average person’s survival after diagnosis is about five years.

“For those diagnosed in their 60s, we know we can do better than that,” said Cogle, a member of the UF Shands Cancer Center whose clinical and research program has been designated a Center of Excellence by the MDS Foundation. “At best, we can double survival time — but we have to know who the patients are so we can offer them the right treatment.”

Cogle and colleagues at the H. Lee Moffitt Cancer Center and Research Institute in Tampa noticed that their clinical practices received many referrals from local physicians trying to figure out the cause of low blood cell counts. MDS diagnoses in those cases occurred almost exclusively on an outpatient basis. But such cases are not captured by registries, which get most of their data from hospitals and laboratories.

“There was a discord between where we saw the disease and where the registry data came from,” Cogle said. “There was a mismatch between clinical practice and the data, so we tackled that discrepancy and tried to make sense of it.”

The researchers devised a new algorithm that made an allowance for the difficulty in diagnosing the disease. Previous studies used MDS insurance claims to estimate the number of cases. But that approach is error-prone because MDS is often coded as different diseases, such as leukemia, aplastic anemia or even vitamin deficiencies, before the true diagnosis becomes clear.

In the new calculation, the researchers counted only patients who had had at least two MDS insurance claims at least 30 days apart. They also included blood count and bone marrow biopsy confirmation in the one-year period before MDS insurance claims. They excluded people who were making a Medicare claim for the first time, because those people might have been diagnosed previously, while covered by private insurance.

The UF and Moffitt researchers found that in the 65-and-older age group there were 75 new cases per 100,000 people each year — almost four times the accepted estimate of 20 per 100,000 that is based on the National Cancer Institute’s Surveillance Epidemiology and End Results cancer registry. That registry shows an overall estimate for all age groups of 3.3 new MDS cases in every 100,000 persons each year.

So who are the people being left out of the traditional database? It turns out that more women than men were omitted, and those people generally had a lower grade of disease and lower medical expenses. Cancer registries indicate that the average age of diagnosis is 71 to 76, but the researchers will use their new calculations to find out whether people are getting diagnosed at a younger age.

The researchers say the MDS underestimate prevents people with the disease from getting available care. The Centers for Medicare and Medicaid Services, for example, uses the low estimate of the number of people affected by the disease as part of the rationale for not paying for bone marrow transplants in MDS patients, except in approved clinical trial settings.

The low estimates also hamper research efforts that could lead to new treatments.

“These data bring the realization that the incidence of MDS is much greater than previously recognized, and that emphasizes the need for greater research funding for the disease,” said senior author Alan F. List, M.D., executive vice president and physician-in-chief at the H. Lee Moffitt Cancer Center and Research Institute.

A better estimate of MDS cases could also help to galvanize funding agencies to invest more resources into patient education about the disease and about treatments.

“They can let the public know about the significance of a low blood count — not to sit on it, but to go out and get a diagnosis,” Cogle said. “If you have MDS, we have ways to help you.”

Science writer for University of Florida’s College of Medicine. Before joining UF in 2008, Czerne was the health and science writer at The State newspaper in Columbia, South Carolina. In... END_OF_DOCUMENT_TOKEN_TO_BE_REPLACED