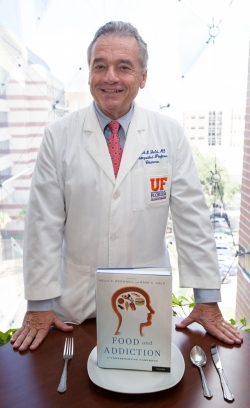 For some, the famous potato chip slogan “Betcha can't eat just one” isn’t a wager — it’s a promise.

This idea, that food can be as addicting as drugs, cigarettes or alcohol, is the focus of the new book “Food and Addiction: A Comprehensive Handbook.” The book, co-edited by a University of Florida addiction expert, is the first to compile academic essays examining the scientific evidence for this controversial eating disorder.

The medical community has only regarded food addiction seriously for the last decade the authors said. Backed by brain-imaging studies and multidisciplinary research, it’s finally a concept that many specialists are willing to sink their teeth into.

However, since the topic stretches across multiple disciplines — nutrition, addiction, psychology, epidemiology and public health, to name a few — the experts in these fields were largely unaware of each other. That is, until neuroscientist Mark S. Gold, M.D., and Yale public health and policy researcher Kelly D. Brownell, Ph.D., decided to bring together the work of many of these researchers and publish their findings.

“It’s like an encyclopedia of experts,” said Gold, chair of the University of Florida College of Medicine’s department of psychiatry.

Brownell, the director of Yale University’s Rudd Center for Food Policy & Obesity, and Gold chose contributors whose expertise ranged from policymaking to a variety of scientific disciplines.

“The merger of public health and policy with neurobiology and translational medicine is a unique aspect of the book,” said Gold, a distinguished professor with the McKnight Brain Institute of UF. “We wanted to include a wide variety of specialists, as well as to give people on the policy side access to basic science so their policy initiatives might be more evidence-based.”

For example, basic science has confirmed that certain foods target the brain and have drug-like qualities.

“Food and drugs compete in the brain for the same reinforcement sites,” Gold said. “Drug-addicted people, once they stop using drugs, always overeat. People who are stressed or in pain overeat. And they don’t just eat anything — they eat desserts, pizza or other reinforcing foods that have drug-like effects.”

Food has changed, and so has our access to it. About two-thirds of U.S. adults are overweight, according to the Centers for Disease Control and Prevention; but Americans also consume more processed food per person than citizens of almost every other country. In countries where fast food is gaining popularity, obesity rates are similarly exploding. In China, the rate of obesity has increased 208 percent since 2002, according to the World Health Organization. Scientists have very little understanding of how all this manufactured food affects our brains, Gold said.

“We’ve shown that animals will self-administer sucrose, glucose and fructose corn syrup, and they will become dependent on those as if they were drugs,” he said. “You can even cause them to have drug-like withdrawal. If your company made a pastry, you’d construct it in a way that’s compelling, where the ingredients are a combination of fat, sweets, salt or fructose corn syrup and chemicals rather than a strawberry, so there’s more of a likelihood that customers would eat it again and again.”

Addiction research has been Gold’s focus for 40 years. When he first started, people weren’t admitted to the hospital for alcoholism because that wasn’t considered appropriate, he said.

“We blamed the patient,” Gold said. “Now we understand that yes, the first cigarette may be the person’s fault. But after that, the cigarette is constructed to incite its own taking. Once the person is addicted — once a cucumber becomes a pickle — they can’t make it back without intervention and organized treatment.”

Gold said it’s important to educate the medical community that addictions, including food addictions, are diseases and that blaming patients is not an effective strategy for helping them.

In 2007, he and Brownell co-hosted a conference at Yale that, for the first time, brought experts together to discuss the controversies of food addiction. The new book builds on the foundation established at that conference, Gold said.

“This is an area of growing scientific and societal interest, and this book is an important contribution,” said Peter F. Buckley, M.D., the dean of the Medical College of Georgia at Georgia Health Sciences University. “Dr. Gold’s work gives us a clearer lens by which to view this important topic. This is not just useful to academics but also to the lay public because this is such a crucial public issue.”

The 485-page book, available from Oxford University Press, includes the work of more than 100 contributors from the U.S., China, Canada, England and France. The 66 essays are organized into seven parts representing three themes: the basic mechanisms of addiction, the addictive impact of food on humans and animals, and possible legal implications and public policy changes.

“We’re in a ‘globesity’ epidemic — a global obesity epidemic — and I think public health approaches and preventions are relevant,” Gold said. “If food is very much like tobacco and the health impact and cost are very much the same, what’s the public policy?”