The best way to prevent the spread of COVID-19 is to get vaccinated. You can get a vaccine in many places in your community. Find a walk-up location or schedule an appointment today. END_OF_DOCUMENT_TOKEN_TO_BE_REPLACED

Obesity higher in rural America than in urban parts of the country, UF researchers, colleagues find 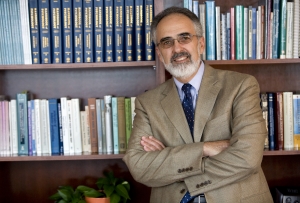 The occurrence of obesity in rural areas of the U.S. is significantly higher than in urban areas, a new study from University of Florida researchers and colleagues has found. Forty percent of rural residents are obese, compared with 33 percent of urban residents.

“I was surprised by the magnitude of the rural-urban difference — it was larger than expected and much larger than previously estimated,” said senior author Michael G. Perri, Ph.D., a professor and dean of the UF College of Public Health and Health Professions.

The findings appear in the fall issue of the Journal of Rural Health, published by the National Rural Health Association.

Nearly 60 million people, or 19 percent of the population, live in rural areas, according to the 2010 U.S. Census.

Perri and fellow investigators Christie Befort, Ph.D., and Niaman Nazir, M.D., both of the University of Kansas Medical Center, analyzed data from the 2005-2008 National Health and Nutrition Examination Survey conducted by the National Center for Health Statistics, which gathers health information through interviews and clinical examinations. Survey participants included 7,325 urban and 1,490 rural residents between the ages of 20 and 75. Height and weight were measured in a mobile examination center and participants reported all food and beverages they had consumed over two 24-hour periods and the frequency and intensity of their physical activity. Age, race, gender, marital status, education and income data was also collected.

Almost 40 percent of rural adults were obese — having a BMI of 30 or greater — compared with just over 33 percent of urban adults.

When age was taken into account, the rural-urban disparity was seen in participants ages 20 to 39, but not among older adults. The researchers theorize that a combination of heavier meals and increased mechanization of traditional rural occupations such as farming and logging might account for the increased obesity rates among young rural workers.

“This analysis can be a turning point in the efforts to ensure adequate attention to obesity in rural America,” said Shiriki Kumanyika, Ph.D., M.P.H., a professor of epidemiology at the University of Pennsylvania Perelman School of Medicine, who was not involved in the study. “Not only does it document the higher prevalence of obesity, particularly among young adults and black Americans in rural areas, but it also provides a solid baseline for measuring future progress in addressing the disparities. The findings about demographic and behavioral factors that relate to obesity remind us that approaches for addressing obesity differ somewhat in rural and urban areas.”

Greater attention should be paid to the problem of obesity in rural areas, where residents have higher rates of chronic disease and premature death, and poorer access to health care services, the researchers say.

One solution may be to tap the expertise of the U.S. Department of Agriculture’s Cooperative Extension Service, an educational network with offices in nearly every U.S. county, said Perri, who has led several behavioral weight management studies for rural residents in collaboration with that service.

“The infrastructure offers an ideal opportunity for providing weight management services to residents of rural counties,” he said. “We have demonstrated the real benefits of offering such programs in this way to children as well as adults.”

Jill Pease is the public relations director for the UF College of Public Health and Health Professions. She is responsible for developing public relations and communications strategies to promote the... END_OF_DOCUMENT_TOKEN_TO_BE_REPLACED