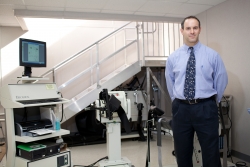 Stephen Anton, Ph.D., an assistant professor in the College of Medicine department of aging and geriatric research and a member of the UF Institute on Aging (Photo by Jesse Jones/University of Florida)

Losing weight sometimes seems like a losing battle; most people who drop pounds by restricting the number of calories they eat eventually regain the lost weight. That’s because hormonal changes associated with weight loss prod people to eat more as the body tries to defend itself against the perceived “hardship.”

Researchers at the University of Florida Institute on Aging are studying whether a plant-based supplement can aid long-term weight loss by controlling hunger levels and food intake. The study is now recruiting healthy nonsmokers ages 50 to 70, who are overweight or obese. The work is funded through a $600,000 grant from the National Center for Complementary and Alternative Medicine of the National Institutes of Health.

After diet-induced weight loss, hormonal changes and the release of certain proteins signal the brain to prompt an increase food intake. In addition, a slowing down of the metabolism reduces how much energy the body uses up, making it harder to keep lost weight at bay. Dietary supplements that allow people to feel satisfied after eating fewer calories have the potential to counteract those changes, researchers say.

“It’s a biological challenge that people are up against, that simply following a calorie-restricted diet and exercise regimen doesn’t seem to overcome,” said lead researcher Stephen Anton, Ph.D., an assistant professor in the College of Medicine department of aging and geriatric research and a member of the UF Institute on Aging. “So many people struggle with increased hunger after weight loss.”

A large body of research shows that people can achieve good short-term weight loss results by eating fewer calories. But maintaining that weight loss requires a 20 percent to 40 percent reduction in calorie intake, and most people have difficulty sticking with such a regimen. As a result, about 95 percent of people regain lost weight within five years, studies show.

More than half of adult Americans are overweight or obese, according to the Centers for Disease

Control and Prevention. Being overweight increases the risk of conditions such as cancer, diabetes and heart disease, and hastens the effects of aging on the body. Healthful eating and physical activity are cornerstones of good health and weight management. But when being overweight leads to restricted movement or a condition called insulin resistance that prevents the body from processing food properly, people might turn to medications and supplements for additional help.

“What we’re finding is that one size doesn’t fit all — we need more tools to help clinicians give more patients the help they need,” said Corby Martin, Ph.D., an associate professor at the Pennington Biomedical Research Center. “Compounds and products that help patients feel full or reduce intake is a viable way to help.”

Martin, who has studied the effect of weight loss on metabolism and appetite and developed web- and smartphone-based weight loss aids, is not involved in the UF study.

One FDA-approved medication prevents the intestines from absorbing some of the fat from food. But that drug can cause distress of the gastrointestinal tract, diarrhea and other side effects. Several plant-based compounds are on the market, but most have not been rigorously tested.

The product being studied at UF is called hydroxycitric acid, and is from a plant called Garcinia Cambogia. It is thought to affect how hormonal signals are sent to the brain. The researchers will study how safe the compound is, and how effective it is at reducing the amount of food people eat, increasing feelings of satisfaction after meals, boosting weight loss and reducing molecular level damage known as oxidative stress.

Previous tests on Garcinia Cambogia were on rodents, or were short-term human studies that did not adequately compare whether results after taking the supplement were much different from results obtained without the supplement. The UF study will compare two different doses of the plant extract against a “supplement” that does not contain the extract. The study will be the first to directly measure the amount of food participants eat after taking the supplement, rather than relying on people to report from memory what they have eaten.

During the 30-week study, participants will take capsules three times a day for six weeks at a time. Use of the supplement might lead to temporary stomach sensitivity. After each six-week test period, participants will spend a day at the test center where they will eat breakfast, lunch and dinner, complete questionnaires, give blood samples and be weighed. Analyses of the measurements will yield needed information on how these supplements might fit into a healthy weight loss regimen.

Science writer for University of Florida’s College of Medicine. Before joining UF in 2008, Czerne was the health and science writer at The State newspaper in Columbia, South Carolina. In... END_OF_DOCUMENT_TOKEN_TO_BE_REPLACED