The best way to prevent the spread of COVID-19 is to get vaccinated. You can get a vaccine in many places in your community. Find a walk-up location or schedule an appointment today. END_OF_DOCUMENT_TOKEN_TO_BE_REPLACED

At the annual meeting of the American College of Emergency Medicine, which was held earlier this month in Denver, the residency team from the UF College of Medicine - Jacksonville Department of Emergency Medicine won the national “SimWars” competition. Go Gators! SimWars is a simulation-based competition between teams from different residency programs that compete in various aspects of patient care in front of a large audience who cast votes.

Over the past decade, simulation training for residents has become an expectation in nearly all specialties but has had even greater roles in anesthesiology, emergency medicine, surgery, pediatrics and OB/GYN. Simulation (training with task trainers, actors, screen simulators, high fidelity mannequins, or a mix of these modalities) provides an avenue to foster knowledge, critical thinking, psychomotor skills, clinical performance and kinesthetics. It provides a safe place for training and feedback.

Simulation training on the Jacksonville campus began in 1999 in the Department of Emergency Medicine (EM). Thanks in part to a large grant obtained by Bob Wears M.D., MS, Ph.D. from the Department of Defense designed to look at teamwork training within emergency departments and hospital units, this initial training expanded into the EM residency curriculum over the next several years to include procedural and resuscitative skills. Under the leadership of Dean Robert Nuss, M.D., in 2004, the Simulation Center became an institutional resource under the Dean’s office, housed in renovated Emergency Room and OR facilities of the Pavilion (former Methodist Hospital). Much of the equipment and staff support at that time was also funded through Department of Defense grants in support of Special Forces Medic training occurring in emergency settings. After being moved under the Dean’s office, the center officially opened as CSESaR, the Center for Simulation Education and Safety Research, supported by 4 positions.

CSESaR’s total number of class hours (2,157) and students (8,288) has doubled since 2006. Expressed in “contact hours” (hours x students/hour), CSESaR had more than 35,000 in 2011. It now provides educational opportunities for nearly every College of Medicine-Jacksonville department, including emergency medicine, internal medicine, pediatrics, surgery, OB/GYN, neurology, orthopedics, podiatry and rheumatology. In addition, it supports nursing education for Shands and UF trainees, as well as Jacksonville University, University of North Florida and Florida State College at Jacksonville.

CSESaR also hosts Advanced Cardiac Life Support and Pediatric Advanced Life Support courses, supports Disaster Medical Assistance Team training, runs sedation and patient safety training courses involving faculty, residents, nurses and students and is also involved in the National Difficult Airway Training course for residents. Its innovative faculty have created opportunities for CSESaR to be involved in academic outreach, medical professional outreach, medical industry outreach and, importantly, general community outreach. One interesting example is collaboration with the School for Medical Arts in Jacksonville to create the first high school in the US with embedded medical training. This initial program with the Darnell-Cookman School for the Medical Arts has expanded to involve several middle- and high-school medical programs across Jacksonville.

SimWars had its genesis in emergency medicine, where patient care frequently encompasses multiple disciplines and requires the collaboration of different specialties. Like many areas of medicine, clinical decisions frequently have immediate and life-changing implications that require the providers to be able to justify clinical choices even in the most stressful circumstances. Most clinicians function in a very complex and challenging environment where errors have significant consequences; indeed, many would say there is no luxury of “psychological safety.” SimWars seeks to replicate the high-stakes environment of actual patient care through the performance of complex medical task in front of audiences.

The concept of SimWars was originated by Andy Godwin, M.D. (Chair, UF Emergency Medicine and Assistant Dean, Simulation Education at Jacksonville), Haru Okuda, M.D. (Director of VA SIMLEARN with oversight of all VA simulation education for the United States) and Scott Weingart, M.D. (Mt. Sinai-NY and Emcrit.org). National and regional meeting coordination now falls under the direction of UF- Jacksonville EM faculty member, Lisa Jacobson, MD.  The most recent SimWars event occurred at the annual conference of the American College of Emergency Physicians. After regional competitions, more than 40 resident teams applied for eight “quarter-final” slots in the competition at the national meeting. The eight teams compete by completing the same simulated patient care scenario, in sets of two teams. After the first team of each “dual match” completes the simulated case (while the second time is outside the “arena”), a panel of experts provides a short debrief to provide poignant teaching points for the team and the audience. The second team has the same experience. The audience votes on a winner. The semifinals involve the same sequence with the four winning teams. In the finals, rather than a vote by the audience, the judging panel of experts not only debriefs, but also chooses, the winning team.  In the finals, the UF Jacksonville team competed successfully against the champions from New York City’s regional event, Beth Israel Medical Center. 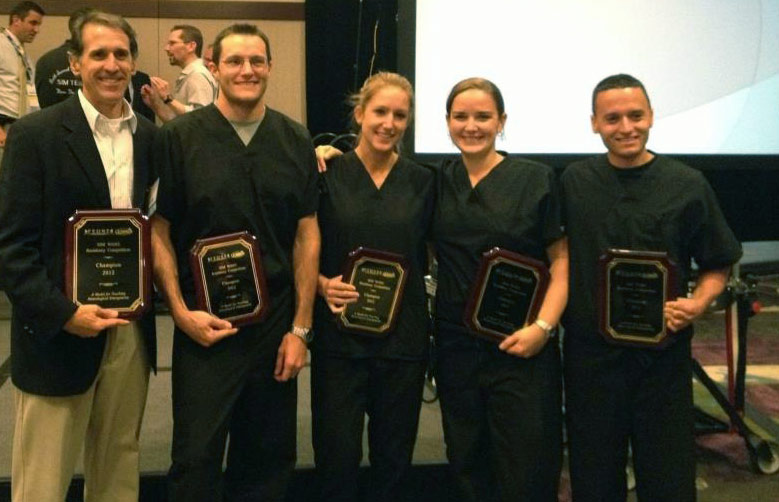 Simwars cases present complex medical scenarios with embedded distracters such as disruptive adjacent patients, effusive family members or overeager new trainees. The UF team handled this beautifully. According to Dr. Godwin, the UF team leader, Heidi Ashbaugh, M.D., maintained a calm yet strong leadership role, which at times brought the auditorium to a hush when it was an otherwise noisy, chaotic environment. Team member Tracy Graham, M.D. displayed unique talents in “managing” aggressive friends of the patients who believed they could snap pictures of the patient care while it was happening. Brian Baird, M.D. provided evidence-based suggestions to the team to ensure that high-quality care was provided within the hectic environment. Stephen MacDade, M.D., recognized a critical etiologic feature of the simulated patient, leading to successful resuscitation.

To place the nationally distinguished work of the UF College of Medicine – Jacksonville Department of Emergency Medicine in context, it is noteworthy that UF is the birthplace of the Human Patient Simulator, developed by a team led by Dean Michael Good, M.D. This mannequin-based simulator is now used worldwide and has revolutionized healthcare training. The Virtual Anesthesia Machine web site, also developed at UF by long-time anesthesiology faculty member Samsun Lampotang, Ph.D., remains a pioneer in developing web-enabled, screen-based simulations. Other simulation technologies developed at UF by Dr. Lampotang and others with the potential for significant impact include:

The SimWars concept led by Dr. Godwin has spread quite rapidly and now is a fixture not only at Emergency Medicine meetings, but at international simulation society meetings and other specialties such as neurocritical care, gynecology and oral surgery. This year for the first time, the AAMC is hosting a SimWars demonstration to highlight simulation training in residency and student education.