UF Health to resume elective surgeries, procedures on Monday, May 4. For more information on our ongoing response to COVID-19 in Gainesville, Jacksonville and Central Florida, visit our coronavirus website. END_OF_DOCUMENT_TOKEN_TO_BE_REPLACED

Targeting tumors may help stop spread of breast, other cancers 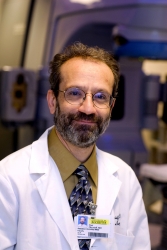 Cancer that has spread from the site of an original tumor to other places in the body is often viewed as a death sentence. But if there are just a few of those secondary tumors, called metastases, some patients have a good chance of survival if treated with a type of radiation that precisely targets small tumors, researchers at the University of Florida and the University of Rochester report online and in an upcoming print edition of the International Journal of Radiation Oncology, Biology, Physics.

“The dogma is that this type of disease is incurable and that if there’s a metastatic tumor in one organ, then others must be present throughout the body,” said investigator Paul Okunieff, M.D., director of the UF Shands Cancer Center and chairman of the UF College of Medicine’s department of radiation oncology. “It’s considered an all-or-none phenomenon, but the fact is this view is probably not correct. We need to think about metastasis like we think about the primary tumor: determine how much it has spread, then decide whether it’s treatable based on existing technology.”

Nearly 1.6 million Americans were diagnosed with cancer last year, and nearly 600,000 died from the disease, according to the National Cancer Institute. Experts estimate that up to 90 percent of those deaths were from metastases.

The researchers studied 121 patients who had five or fewer tumors that spread from areas such as the breast, colon or lung, to up to three additional organs. Tumors were treated with a one- to two-week radiation course strong enough to kill them and prevent their recurrence while sparing healthy tissue. In about 20 percent of the patients, who were enrolled from 2001 to 2006, long-term follow up revealed that the treated tumors did not return, nor did new ones pop up elsewhere. Very few regrowths occurred among patients who made it to three years.

Breast cancer patients fared even better, with one-third of patients being free of tumor regrowth after three years. Six years after treatment, almost half of breast cancer patients in the study were still alive — five times the survival rate for people with forms of metastatic cancer other than breast cancer. In addition, for more than one-third of breast cancer patients, the cancer did not become widespread after six years, whereas only one-eighth of people with other forms of metastatic cancer did not see their cancer spread. In general, survival was greatest among patients whose secondary tumors were relatively small and responded well to chemotherapy or hormone treatment given before radiation.

“Our results suggest that patients with metastases that are limited in number and extent should be considered for potentially curative radiotherapy, said investigator Michael Milano, M.D., Ph.D., an associate professor of radiation oncology at the University of Rochester. “Further studies are needed to ascertain which patients are most likely to benefit, either through prolonged survival or, perhaps, a cure. We need a better understanding of the biology of cancer, and what makes one person’s cancer behave so differently from another’s.”

Some patients in the study had recurrence of a small number of tumors, and retreatment with targeted radiation controlled their disease.

The researchers call for further investigation into the most appropriate types of treatment for cancer that has spread to limited areas, and the types of cancers most likely to respond.

“Given the promising results of precisely targeted radiation in controlling the spread of disease, easing pain and even unexpectedly extending patient survival — as we’ve seen in our own clinical experience and in the published literature — we must pursue research that advances our understanding of the mechanisms at work,” said Raymond B. Wynn, M.D., executive director for stereotactic radiosurgery at the University of Pittsburgh Medical Center Cancer Center, and a clinical professor of radiation oncology at University of Pittsburgh School of Medicine. “Fortunately, we are more than halfway there.”