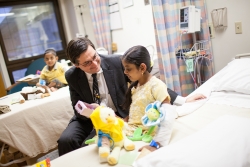 Making children smile is the aim of University of Florida department of pediatrics faculty, so it’s meaningful when the kids return the favor — especially on a global scale.

One of just 10 awardees worldwide this fall, Weinstein was honored for his efforts to help children with glycogen storage disease, or GSD, a rare condition that prevents the body from properly processing sugar; and for his work to help disadvantaged patients who do not have reliable access to health care.

“I am very honored to receive this recognition,” said Weinstein, director of the UF Glycogen Storage Disease Program, which is the largest of its kind in the world. “Knowing the support of my patients was the driving force of my nomination makes this particularly special for me.”

The Order of the Smile honor puts Weinstein in the company of distinguished awardees such as Pope John Paul II, Mother Teresa, Nelson Mandela, the Dalai Lama, Steven Spielberg and Oprah Winfrey. Inspired by Polish writer Wanda Chotomska, the award was established in the late 1960s by the editor-in-chief of the magazine Kurier Polski. The Order of the Smile was officially recognized by the United Nations in 1979, which was designated as the International Year of the Child. Weinstein will travel to Poland in the summer of 2013 to accept the award.

Through the UF GSD Program, Weinstein works with more than 425 patients in 36 countries and all U.S. states. The program is supported by the Alyssa’s Angel Fund, which assists patients with transportation, hospitalization and follow-up treatment costs associated with specialty care. The program also trains international health care providers on ways to improve care for children with GSD.

“GSD can be very scary, but Doctor David does everything possible to make us smile!! We love him very much!” a 7-year-old patient wrote in her nomination letter.

The Order of the Smile is awarded twice a year, in spring and fall, and in its 44 years of existence has recognized nearly 900 people from 45 countries.

“We have known about Dr. Weinstein’s major contributions to the field of GSD for many years,” said Scott A. Rivkees, M.D., chair of the UF College of Medicine department of pediatrics. “It is now very gratifying to see that the world has taken note of all the special things he has done.”

In Poland, Weinstein will be admitted into the Order the Smile during a ceremony in which knighthood will be conferred with the tap of a rose on his shoulders. He will then receive the Order’s trademark blue and yellow medal with the image of a smiling sun, a special sash and a cup of lemon juice freshly squeezed by children.

Then he will be asked to wrap things up with a smile.

Peveeta Persaud, APR., joined the UF Health Communications team in 2012, serving as marketing coordinator for the University of Florida's Department of Pediatrics.

Peveeta graduated from the University of Central Florida, magna... END_OF_DOCUMENT_TOKEN_TO_BE_REPLACED