For more information on our ongoing response to COVID-19 in Gainesville, Jacksonville and Central Florida, visit our coronavirus website. END_OF_DOCUMENT_TOKEN_TO_BE_REPLACED

University of Florida researchers have moved a step closer to treating diseases on a cellular level by creating a tiny particle that can be programmed to shut down the genetic production line that cranks out disease-related proteins.

In laboratory tests, these newly created “nanorobots” all but eradicated hepatitis C virus infection. The programmable nature of the particle makes it potentially useful against diseases such as cancer and other viral infections.

The research effort, led by Y. Charles Cao, Ph.D., a UF associate professor of chemistry, and Chen Liu, M.D., Ph.D., a professor of pathology and endowed chair in gastrointestinal and liver research in the UF College of Medicine, is described online this week in the Proceedings of the National Academy of Sciences.

“This is a novel technology that may have broad application because it can target essentially any gene we want,” Liu said. “This opens the door to new fields so we can test many other things. We’re excited about it.”

During the past five decades, nanoparticles — particles so small that tens of thousands of them can fit on the head of a pin — have emerged as a viable foundation for new ways to diagnose, monitor and treat disease. Nanoparticle-based technologies are already in use in medical settings, such as in genetic testing and for pinpointing genetic markers of disease. And several related therapies are at varying stages of clinical trial.

The Holy Grail of nanotherapy is an agent so exquisitely selective that it enters only diseased cells, targets only the specified disease process within those cells and leaves healthy cells unharmed.

To demonstrate how this can work, Cao and colleagues, with funding from the National Institutes of Health, the Office of Naval Research and the UF Research Opportunity Seed Fund, created and tested a particle that targets hepatitis C virus in the liver and prevents the virus from making copies of itself.

Hepatitis C infection causes liver inflammation, which can eventually lead to scarring and cirrhosis. The disease is transmitted via contact with infected blood, most commonly through injection drug use, needlestick injuries in medical settings, and birth to an infected mother. More than 3 million people in the United States are infected and about 17,000 new cases are diagnosed each year, according to the Centers for Disease Control and Prevention. Patients can go many years without symptoms, which can include nausea, fatigue and abdominal discomfort.

Current hepatitis C treatments involve the use of drugs that attack the replication machinery of the virus. But the therapies are only partially effective, on average helping less than 50 percent of patients, according to studies published in The New England Journal of Medicine and other journals. Side effects vary widely from one medication to another, and can include flu-like symptoms, anemia and anxiety.

Cao and colleagues, including graduate student Soon Hye Yang and postdoctoral associates Zhongliang Wang, Hongyan Liu and Tie Wang, wanted to improve on the concept of interfering with the viral genetic material in a way that boosted therapy effectiveness and reduced side effects.

The particle they created can be tailored to match the genetic material of the desired target of attack, and to sneak into cells unnoticed by the body’s innate defense mechanisms.

Recognition of genetic material from potentially harmful sources is the basis of important treatments for a number of diseases, including cancer, that are linked to the production of detrimental proteins. It also has potential for use in detecting and destroying viruses used as bioweapons.

The new virus-destroyer, called a nanozyme, has a backbone of tiny gold particles and a surface with two main biological components. The first biological portion is a type of protein called an enzyme that can destroy the genetic recipe-carrier, called mRNA, for making the disease-related protein in question. The other component is a large molecule called a DNA oligonucleotide that recognizes the genetic material of the target to be destroyed and instructs its neighbor, the enzyme, to carry out the deed. By itself, the enzyme does not selectively attack hepatitis C, but the combo does the trick.

In laboratory tests, the treatment led to almost a 100 percent decrease in hepatitis C virus levels. In addition, it did not trigger the body’s defense mechanism, and that reduced the chance of side effects. Still, additional testing is needed to determine the safety of the approach.

Future therapies could potentially be in pill form. 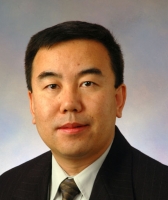 “We can effectively stop hepatitis C infection if this technology can be further developed for clinical use,” said Liu, who is a member of The UF Shands Cancer Center.

The UF nanoparticle design takes inspiration from the Nobel prize-winning discovery of a process in the body in which one part of a two-component complex destroys the genetic instructions for manufacturing protein, and the other part serves to hold off the body’s immune system attacks. This complex controls many naturally occurring processes in the body, so drugs that imitate it have the potential to hijack the production of proteins needed for normal function. The UF-developed therapy tricks the body into accepting it as part of the normal processes, but does not interfere with those processes.

“They’ve developed a nanoparticle that mimics a complex biological machine — that’s quite a powerful thing,” said nanoparticle expert C. Shad Thaxton, M.D., Ph.D., an assistant professor of urology at the Feinberg School of Medicine at Northwestern University and co-founder of the biotechnology company AuraSense LLC, who was not involved in the UF study. “The promise of nanotechnology is extraordinary. It will have a real and significant impact on how we practice medicine.”

Science writer for University of Florida’s College of Medicine. Before joining UF in 2008, Czerne was the health and science writer at The State newspaper in Columbia, South Carolina. In... END_OF_DOCUMENT_TOKEN_TO_BE_REPLACED