Tweet
GAINESVILLE, Fla. — University of Florida researchers have received a $1.5 million, five-year grant from the National Institutes of Health’s National Cancer Institute to examine the role of an inflammation-causing protein in colon cancer development.

Scientists suspect increased levels of the protein, called interleukin-8, or IL-8, may be partly to blame for increased rates of colon cancer among people who have ulcerative colitis, a condition that causes inflammation and bleeding in the lining of the colon and rectum. 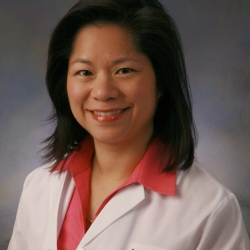 If IL-8 is a culprit in cancer formation, scientists would focus on finding ways to disrupt its function and, in turn, halt the growth of colon cancer, said principal investigator Emina Huang, M.D., a colorectal surgeon and an associate professor in the UF College of Medicine’s department of surgery.

About 750,000 Americans have ulcerative colitis, according to the Crohn’s and Colitis Foundation of America. The disease causes abdominal pain and can lead to loss of appetite, anemia, weight loss, fatigue, diarrhea and other symptoms. People with chronic ulcerative colitis are three to five times more likely than the general population to receive a colon cancer diagnosis.

“We have known for a long time there is a clear relationship between cancer development and chronic inflammation in humans,” said Weiping Zou, M.D., Ph.D., a professor of surgery, immunology and biology and director for translational research at the University of Michigan. Zou is not involved in the UF research. “This is important, but not really very informative, because we really don’t know what’s going on. This project is trying to address this question by uncovering the cellular and the molecular mechanisms to explain why we have (that association). This is scientifically important.”

The work will focus on the role of IL-8 in the cells that line the inside of the colon. IL-8 is known to exist in cells called fibroblasts, which produce proteins that help “glue” the body’s tissues together. Scientists recently found that these cells contribute to the development of tumors in the colon.

In previous research, Huang and her team tested a different kind of tumor-initiating cell from the lining of the colon to see if they also contain the protein.

“To our surprise, they also made quite a bit of IL-8,” Huang said. “The reasons IL-8 is present are not clear. Researchers are trying to learn which cells are making IL-8 and why. Once this is determined, then it may be a therapeutic target.”

With the new grant, Huang and her collaborators will take the work a step further and test the effects of the protein on those tumor-initiating cells and examine the added influence of a second protein involved in cell binding, movement and death. They will also study whether higher levels of IL-8 are linked to a mutation that hinders the activity of a third type of protein that kills unhealthy cells. Left unchecked, such cells may create tumors.

Before joining the HSC News and Communications staff, Laura worked as a reporter for the Palm Beach Post in West Palm Beach, Florida, writing crime and general news stories, as... END_OF_DOCUMENT_TOKEN_TO_BE_REPLACED