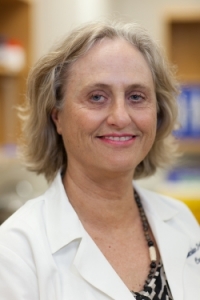 People at risk for Type 1 diabetes may have fewer insulin-producing “beta” cells than people not at risk, a finding that could help researchers shed light on what causes the disease, a new University of Florida study shows.

The study, which will be published Wednesday (Dec. 12) in the Journal of the American Medical Association, revealed that people at risk for Type 1 diabetes had smaller pancreases than people who were not at risk.

“This is the first time this has been noted,” said Martha Campbell-Thompson, D.V.M., Ph.D., a professor in the UF College of Medicine department of pathology, immunology and laboratory medicine. “We still don’t know what causes Type 1 diabetes, but if people have fewer beta cells to begin with, other confounding factors such as a virus or genetics could help push them over into having clinical diabetes.  There are a lot of possibilities.”

Type 1 diabetes occurs when the body’s immune system begins attacking its own beta cells in the pancreas, which are responsible for producing insulin the body needs to convert sugar into energy. The beta cells stop producing insulin, often beginning in childhood. Because of this, patients must take insulin for the rest of their lives. This differs from the more common Type 2 diabetes, which often can be prevented and treated through lifestyle changes, such as improved diet and increased exercise.

Although genetics plays a big role, researchers still don’t know what triggers this autoimmune attack, and after it begins, there is no going back, said Campbell-Thompson, director of the pathology core for the Network for Pancreatic Organ Donors with Diabetes, or nPOD, a human pancreas biorepository housed within the UF Diabetes Center of Excellence.

In the current study, Campbell-Thompson and colleagues at the City of Hope National Medical Center examined 164 pancreases from adult organ donors, including those with auto-antibodies linked to an increased risk for Type 1 diabetes. After examining the organs and comparing them with control samples, the researchers discovered that the people at risk for Type 1 diabetes had pancreases roughly three-fourths the weight of those of patients not at risk for the disease. In addition, patients already diagnosed with Type 1 diabetes had pancreases about half the weight of control samples, Campbell-Thompson said.

“Had they not become organ donors, these people might have eventually developed Type 1 diabetes, so we were trying to carefully characterize their pancreases and their insulin-producing cells to see what was going on. A simple part of that was just weighing the pancreas when we got it,” she said. “As we got more and more of these donors, a trend started showing up that these pancreases weighed less. They weighed lower than normal controls.”

The ultimate goal of the research, and nPOD, which provides pancreas samples to researchers across the country, is to first understand how the pancreas works and then uncover new and better ways to not only treat Type 1 diabetes, but also to prevent it.

“Thanks to nPOD’s valuable and rapidly growing collection of pancreas samples and other tissues, its team of researchers was able to examine, for the first time, the pancreas weight of those at risk for developing Type 1 diabetes,” said Teodora Staeva, Ph.D., program director for immune therapies at JDRF, the leading foundation focused on advancing Type 1 diabetes research, which funded the study. “The findings raise significant questions about the development and progression of Type 1 diabetes.”

Obtaining and analyzing human pancreas samples has proved crucial for researchers because mouse models used to uncover new treatments for Type 1 diabetes are no longer considered good examples of the disease in humans.

“There are major differences between human Type 1 diabetes and the animal models,” Campbell-Thompson said. “It’s really changing some of our ideas about when this autoimmune attack might occur, and we still don’t know all the players.”

The researchers now hope to take the study a step further by using noninvasive methods such as magnetic resonance imaging, or MRI, to gauge pancreas size in live patients.

“This could really change some of the ideas we have about Type 1 diabetes,” Campbell-Thompson said. “By understanding how it develops we can think of new ways to treat it.”