UF Health to resume elective surgeries, procedures on Monday, May 4. For more information on our ongoing response to COVID-19 in Gainesville, Jacksonville and Central Florida, visit our coronavirus website. END_OF_DOCUMENT_TOKEN_TO_BE_REPLACED

A body at peace 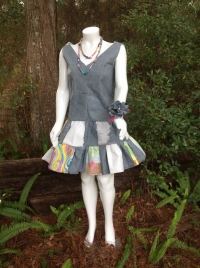 It was the first step in “Transfiguration: Making Peace With Our Bodies,” a positive body image project created by the UF&Shands Eating Disorder Recovery Center that transformed old clothing into a paper dress for a size 16 mannequin. Patients also wrote letters to their bodies, which were rolled into paper beads and strung together as necklaces.

Patients of the Eating Disorder Recovery Center, or EDRC, picked up their old clothes and cut them into small pieces, which were then broken down into a pulp.

The participants, males and females ages 12 to 66, shared recovery stories as they tore into the fabrics that once propelled them.

“The scissors were severing the connection to that eating disorder voice,” Camp said.

Camp attended one of these sessions. After papermaking in the Shands Garden of Hope, she turned to Bucciarelli and mentioned the encouraging effect it could have on patients with eating disorders.

“Instead of deconstructing hospital gowns, patients would deconstruct their skinny jeans,” Bucciarelli said.

“Transfiguration” occurred over several weeks starting in early December. On the day of papermaking, eight patients participated. Because patients stay an average of three weeks, various groups were able to experience the project.

“It’s the idea of deconstruction to reconstruction,” Bucciarelli said. “It’s taking something you really need to let go of — clothes that don’t fit your healthy body — and ripping it up.”

Patients with eating disorders are sometimes obsessive-compulsive, tirelessly pursuing perfection, Bucciarelli said. Dipping their hands into water without knowing what to expect broke that stereotype.

“If you pull a sheet of paper and it doesn’t look right, you just put it back in the water and remake the paper,” she said. “It helps them practice to make mistakes — that it’s OK and that they can learn from it.”

Members then embedded each sheet with positive body image words including “love,” “health,” “strength” and “peace.” Once the sheets were pressed and dried, groups drew images of a time they felt happy and healthy.

“It’s all symbolic,” Camp said. She saw stacks of T-shirts and jeans, objects from patients’ pasts, transformed into something useful and beautiful.

One patient chose to cut up her long underwear. Camp said that patient was so malnourished, she was constantly cold.

“She just said, ‘I’m not going to need this anymore. I’m going to keep my own body warm.’”