For the latest updates on closures or modified hours for our UF Health clinical facilities, please click: END_OF_DOCUMENT_TOKEN_TO_BE_REPLACED 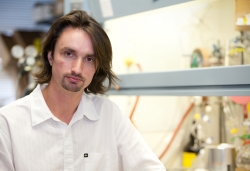 A new defense against prostate cancer, the most common cancer in men in the United States, may come from a seaweed found off the coast of Florida.

University of Florida pharmacy researchers have screened various seaweeds with cancer-preventive potential and identified one that shows particular promise. They isolated specific compounds in this common green alga, known as sea lettuce, and undertook studies to understand exactly how they work. Their findings, published Sept. 4 in Cancer Prevention Research, show how the species may protect multiple organs from disease and may be particularly effective in preventing prostate cancer.

Sea lettuce is commonly consumed in Asian countries where the risk of prostate cancer is low, but there have been no rigorous studies to verify the correlation, said Hendrik Luesch, Ph.D., an associate professor of medicinal chemistry in the UF College of Pharmacy, a part of UF Health. Luesch’s marine natural products laboratory offers the first investigation of this seaweed’s cellular functions, revealing specific mechanisms that contribute to its anti-inflammatory and anti-tumor properties and identifying its active chemical ingredients.

“We now have scientific evidence that this seaweed raises the body’s antioxidant defense system and therefore might potentially prevent a number of diseases, including cancer,” said Luesch. “This mechanism appears to be most relevant to prostate cancer.”

Scientists have long believed that seaweeds, a staple of Asian diets, may lower cancer risk in Western populations. When Luesch investigated at the molecular level, he identified key factors that support the hypothesis, including which seaweeds might provide the most protection.

Close to 240,000 men will be diagnosed with prostate cancer in the United States this year, leading all cancers in the number of new cases, according to a 2013 report from the American Cancer Society. The report shows prostate cancer to be the second leading cause of death after lung cancer for men and ranks Florida second only to California in its estimation of new cases and of deaths this year.

Molecules known as free radicals are a byproduct of exposure to environmental toxins and even occur during digestion. They damage cells, causing oxidation and inflammation that lead to a number of chronic health conditions such as heart disease, cancer and arthritis, Luesch said.Antioxidant-rich fruits and vegetables protect the body against these free radicals, mostly through a scavenging process of elimination. Rather than simply removing the damaging free radicals through this direct reaction, compounds in sea lettuce worked through an indirect mechanism, Luesch found. This process increases the levels of a suite of antioxidant enzymes and boosts antioxidants is cells, producing longer-lasting protection. Regulated by stretches of DNA called antioxidant response elements, the enzymes prevent oxidative damage and inflammation.

Luesch points to sulforaphane, a chemical in broccoli, as an example of a cancer-preventive natural product that has been shown to work through this kind of regulation. His paper describes how increased expression of these enzymes correlates with an increased antioxidant status of the cell and anti-inflammatory activity.

With research funding, further studies can pinpoint potency, dosage and effectiveness, Luesch said. The antioxidant enzyme activities in sea lettuce make it ideal for development as a preventive natural supplement. He sees potential for making a big difference, not only for men’s health, but also to prevent an array of inflammatory diseases that challenge everyone’s health.

Luesch is also an affiliate member of the UF Health Cancer Center, the Evelyn F. & William L. McKnight Brain Institute and the Center for Translational Research in Neurodegenerative Disease at the University of Florida.

Linda Homewood, APR is the Director of News & Communications for the UF College of Pharmacy, she is also the editor of the college’s alumni magazine, GATORx. An accredited member... END_OF_DOCUMENT_TOKEN_TO_BE_REPLACED