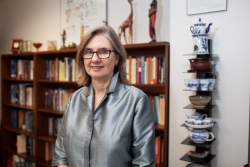 A new University of Florida survey suggests that police misconduct against female drug offenders may be more pervasive than previously thought.

The survey of more than 300 St. Louis-area women who had been charged with substance-abuse violations found that 25 percent of the respondents reported experiencing police sexual misconduct in the form of trading sex for favors.

It is believed to be the first systematic study to assess sex trading between police officers and female offenders from the women’s perspective. The findings appear online ahead of print in the American Journal of Public Health.

“It’s important that the police force acknowledges that sexual misconduct may exist among the force, so that it can be stopped and eventually prevented,” said lead investigator Linda B. Cottler, a professor and chair of the department of epidemiology in the UF College of Public Health and Health Professions and the UF College of Medicine.

In 2009, 1.3 million American women were incarcerated or under correctional supervision, up from 600,000 in 1990, according to the Bureau of Justice Statistics. Previous research has shown that female offenders have higher rates than the general female population of physical or sexual abuse as a minor, childhood household dysfunction and adolescent pregnancy.

Data for the UF study on police sexual misconduct were gathered as part of the Sisters Teaching Options for Prevention, or STOP, project, led by Cottler while she was on the faculty at Washington University in St. Louis. Funded by the National Institute of Nursing Research, STOP was an HIV prevention study conducted from 2005 to 2008 to reduce high-risk substance abuse and sexual behaviors among women in drug courts. Prior to beginning the study, researchers conducted focus groups with women in a medium-security institution.

“During our conversations the women revealed that their sex partners included police officers and it wasn’t a long time ago, it was happening quite recently,” said Cottler, the associate dean for research and planning at the College of Public Health and Health Professions. “These focus groups formed the basis for the addition of a dozen or so questions that we inserted into our study questionnaire.”

The study involved 318 participants, age 18 or older, who were under the supervision of a probation or parole officer for a non-violent offense. Study recruiters were stationed in two St. Louis-area drug courts during dockets that included women charged with substance-related violations. The women completed surveys led by trained interviewers with information collected on demographics, drug-use history, psychiatric disorders, stressful life events and experiences with police sexual misconduct.

One quarter of study participants reported a lifetime history of police sexual misconduct. Of those women, 96 percent said they had sex with an officer on duty, and 24 percent reported having sex with an officer while the officer’s partner or another officer was present. Only half said they always used a condom with an officer. Fifty-four percent of the women said the officer offered favors in exchange for sex, such as to avoid arrest or being charged with a crime, and 87 percent said officers kept their promises. About one-third of the women who had experienced police sexual misconduct characterized the encounter as rape.

Women who were unemployed, had multiple arrests, adult antisocial personality and lifetime use of cocaine and opiates were at highest risk of trading sex with an officer.

The researchers stress that police sexual misconduct is likely perpetrated by a small number of officers and not by a large proportion of officers. They noted that because of the unequal distribution of power between an officer and a female offender, sex trading should never be considered consensual.

“This study is a call to action for law enforcement, and we need the law enforcement community to understand the vulnerability of women trying to change their high-risk behavior,” Cottler said. “We must have an open dialogue to address this issue through policies and trainings.”

Further research should look at the extent of police sexual misconduct among other populations, the researchers said.

Jill Pease is the public relations director for the UF College of Public Health and Health Professions. She is responsible for developing public relations and communications strategies to promote the... END_OF_DOCUMENT_TOKEN_TO_BE_REPLACED