UF Health to resume elective surgeries, procedures on Monday, May 4. For more information on our ongoing response to COVID-19 in Gainesville, Jacksonville and Central Florida, visit our coronavirus website. END_OF_DOCUMENT_TOKEN_TO_BE_REPLACED

Anaclerio named Distinguished Alumnus of the University of Florida

Published: May 23, 2014 By: Christine Boatwright Category: University of Florida, College of Medicine 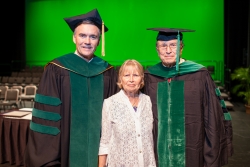 Angelo Anaclerio, M.D., spent 30 years caring for the Danville, Illinois community. On May 10, he was honored by his alma mater, the University of Florida, for his contribution to his field, his profession and his community.

University of Florida honored Anaclerio as a Distinguished Alumnus during the UF College of Medicine commencement ceremony in Gainesville, Florida.

Anaclerio graduated from the UF College of Medicine in 1962 as part of the medical school’s third class of graduates.

“From the moment he earned his medical degree, he began a career marked by innovation, excellence, service and philanthropy,” said Michael Good, M.D., the dean of the UF College of Medicine.

After finishing medical school, Anaclerio was drafted into the U.S. Air Force in 1964, and he completed his residency in Washington, D.C. when he returned home. As he set up his practice in 1969, he responded to a call from the American Medical Association, which was looking for an ophthalmologist to fulfill the needs of the Danville community. Danville, according to Anaclerio, had industries that caused eye injuries for the workers and was in need of an eye care specialist.

“We went to Danville because they needed an ophthalmologist, and we thought it would be advantageous,” Anaclerio said. “It worked out very well. It was a nice community — a busy community with industry. I was needed, and I felt like I offered something to the community.”

Anaclerio first opened the Danville Eye Clinic and Cataract Center and later a second clinic in neighboring Watseka. The practice of ophthalmology changed dramatically throughout Anaclerio’s career, and he embraced advanced techniques in cataract surgery by pioneering the use of lasers to speed patient recovery time.

“That was part of the excitement about being an ophthalmologist in that era,” he said.

Anaclerio then did something unheard of in his profession at the time. He hired an optometrist to partner in his practice. Ronald Serfoss, O.D., took the position, and two additional optometrists later joined the practice.

“I often refer to Dr. Anaclerio as my mentor, but he more aptly described the professional relationship at the Danville Eye Clinic and Cataract Center as ‘a collegial atmosphere of shared learning,’ and it was to our patients’ benefit,” Serfoss wrote in his nomination letter in support of Anaclerio being selected for the award.

Anaclerio retired in March 2001 after practicing for more than 30 years. He and his wife, Alberta, live in Longboat Key, Florida, but visit Danville every year.

In addition to top-notch eye care, Anaclerio supported local education by creating a scholarship endowment at the Danville Area Community College. He also donated to the UF College of Medicine by establishing the Dr. Angelo and Alberta Anaclerio Learning and Assessment Center, which will be located in the university’s new medical education building.

“Education has certainly helped me go through life and become successful,” Anaclerio said. “It’s something I can offer to other people, and other people can have the same advantage I had. I think it’s really important.”