UF Health to resume elective surgeries, procedures on Monday, May 4. For more information on our ongoing response to COVID-19 in Gainesville, Jacksonville and Central Florida, visit our coronavirus website. END_OF_DOCUMENT_TOKEN_TO_BE_REPLACED

Back in the classroom 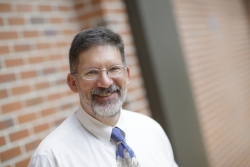 When it came to his job, Peter Pelletier, M.D., used to wear five hats, as he likes to say. It was a constant game of juggle and balance.

However, working in five different areas forced Pelletier to place two of his passions, teaching and research, on the back burner. That changed once Pelletier joined UF Health.

Now, Pelletier, a recent addition to the College of Medicine department of pathology, immunology and laboratory medicine, can proudly wear one 10-gallon hat at his new position.

And he can hardly contain his excitement.

In August, Pelletier, a recently retired U.S. Air Force commander of the Medical Operations Squadron at San Antonio Military Medical Center in San Antonio, became director of transfusion medicine at UF Health. In addition to reviewing the blood product inventory and working with various departments on improving blood utilization, he now teaches the art and science of transfusion medicine to medical students, residents and fellows.

He also conducts research on blood product manufacturing, the process where blood is separated into components before transfusing to critically ill patients. Pelletier is hoping his research at UF can decrease the risk of diseases transmissible by blood transfusion, such as Ebola or Chikungunya virus.

One of Pelletier’s biggest military projects was in 2005, when he was deployed to Iraq for five months to build a transfusion program to collect platelets. He was one of the first transfusion medicine doctors to work overseas in combat areas. At the time, the current blood donor program didn’t allow time to test for transmissible diseases, even when needed. He and his coworkers established a platelet collection program that facilitated and improved blood transfusions for soldiers.

Pelletier is eager to expand his research on pathogen inactivation studies and work to make blood products safer,
he said.

In blood banking, Pelletier works directly with patients and explains how long or complex a particular test is, an opportunity most pathologists may not have. It allows him to have a foot in both roles, as part-laboratorian and part-clinician, he said.

“In my mindset, I think blood bankers are the missing link between the clinicians and the lab,” he said.

Immediately after completing medical school in Chicago, he entered an Air Force Internal Medicine Residency in Dayton, Ohio  in 1991. He then completed another residency program in Texas and became board-certified in anatomic and clinical pathology. In 2004, Pelletier traveled to Yale for a fellowship, expanding his knowledge in transfusion medicine.

“As a transfusion physician I was able to directly care for patients and aid other providers to give the best care to their patients also,” he said.

However, when the opportunity to come to UF was presented, Pelletier jumped at the chance. Pelletier announced his official retirement in October after 23 years of military service.

The position at UF allows Pelletier to focus on his two main passions while also enjoying the enthusiasm of his faculty colleagues and the students, he said.

“I’ve already gotten phone calls (from my peers) asking for my opinions,” he said. “I’m hoping to improve our collaborative care. And they can hear my excitement over the phone.”