UF Health to resume elective surgeries, procedures on Monday, May 4. For more information on our ongoing response to COVID-19 in Gainesville, Jacksonville and Central Florida, visit our coronavirus website. END_OF_DOCUMENT_TOKEN_TO_BE_REPLACED

“My mission here has been accomplished” 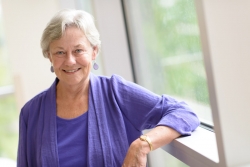 Mary Peoples-Sheps, DrPH, M.S., found her passion when she learned the story of her grandfather’s birth. Born in 1893 as a premature triplet, he was so small that he and his brothers all fit in a drawer. Hearing this story when she was growing up sparked Peoples-Sheps’ interest in mothers and babies, as well as the role that poverty plays in survival.

After 10 years of service to the College of Public Health and Health Professions, Peoples-Sheps recently retired from her role as senior associate dean for public health. She may be stepping down, but colleagues say her legacy will linger with the college for years to come. Peoples-Sheps was instrumental in the college receiving accreditation by the Council on Education for Public Health in 2009.

She began her career in Cleveland after graduating from nursing school at Saint John College. She soon realized that nursing in the hospital was not where she wanted to be. Peoples-Sheps eventually moved into an administrative position over a federal nursing project, the Maternity and Infant Care project, where she learned to allocate budgets and resources to the most eligible in a population of women who were very much in need.

“What I’ve learned along the way is that at every level there are issues and challenges to overcome,” she said.

After transitioning into academia — she was on the faculty at the University of North Carolina School of Public Health from 1984 to 1998 — she discovered her experience as a nurse helped her to know exactly what students would need and how to better train them.

She created assignments for her students “that got them out of the classroom and into the community.” She made sure to have direct contact with students, even as an administrator. In addition to teaching, she served on doctoral committees and mentored and advised students.

As a nurse she had to figure out options and plans and then implement and evaluate them. She learned in public health
that the same framework applied, just with a different target. Instead of focusing on single patients, she targets populations of them.

“This framework has guided my life,” she said.

In 2004, Peoples-Sheps joined the UF faculty to help develop the infrastructure for the public health program and integrate this training into the college.

For Peoples-Sheps, her legacy at UF revolves around the strength of the public health program. The program’s foundation is so strong it can take the college wherever it wants to go, she said. She’s proud of that fact.

“My mission here has been accomplished,” she said. “You start to realize there are so many years left and if there are things you’d like to do, you should do them.”

Although she is retiring, Peoples-Sheps won’t stop working. She will continue to sit on the boards for HealthyStart Florida and the Florida March of Dimes.

But there’s a little fun in store, too. She plans to travel, learn how to make stained glass and finally grow her gardening skills.