UF Health to resume elective surgeries, procedures on Monday, May 4. For more information on our ongoing response to COVID-19 in Gainesville, Jacksonville and Central Florida, visit our coronavirus website. END_OF_DOCUMENT_TOKEN_TO_BE_REPLACED 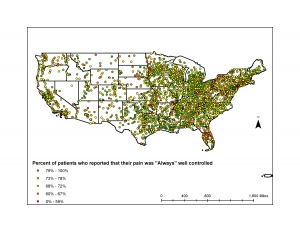 Hospital patients’ responses to a question about whether their pain is well-controlled may depend in part on where they live, University of Florida researchers report.

The findings could lead to system-level changes in patient care based on regional differences, said Patrick Tighe, M.D. M.S., an assistant professor of anesthesiology and the study’s first author.

As part of a national assessment, hospital patients were asked the question: “During this hospital stay, how often was your pain well-controlled?” It turns out that more patients in Louisiana answer this question with “always” than any other state in the country, whereas more patients in the District of Columbia answer it with “never.” Hospitals in the Midwest seem to receive the largest proportion of “always” responses from patients, whereas hospitals in the Mid-Atlantic states, Florida and coastal California seem to have the smallest proportion of “always” responses.

For the study, Tighe and co-authors Roger B. Fillingim, Ph.D., director of the UF Pain Research and Intervention Center of Excellence, and Robert W. Hurley, M.D., Ph.D., an associate professor of anesthesiology in the UF College of Medicine and chief of pain medicine at UF Health, used data from the 2011 Hospital Consumer Assessment of Healthcare Providers and Systems survey.

In 2002, the Center for Medicare and Medicaid Services partnered with the Agency for Healthcare Research and Quality to develop the annual survey, which asks recently discharged patients to rate aspects of their hospital experience in areas such as cleanliness, staff responsiveness and pain management. Before the survey premiered in 2008, there were no common metrics or national standards for collecting and publicly reporting patient experience of hospital care.

Prior research has been conducted on the relationship between the survey answers and demographics, but this is the first time answers pertaining to pain management have been assessed using a geospatial analysis, tying data to geographical locations.

Tighe and colleagues looked at all U.S. hospitals with applicable survey data — about 3,645 — and created a composite score for each based on how many patients chose the following answers: “always,” “usually,” “sometimes” or “never.”

“The results were somewhat unexpected,” said Tighe. “When we look at the reasons why patients may rate their experience a certain way, we generally don’t take into account the effect of hospital location.”

They found that high-scoring “always” hospitals tended be surrounded by other high-scoring hospitals. This can be observed in parts of Texas, Louisiana, Minnesota and Ohio, for example. This phenomenon seems to occur in metropolitan areas where there are tight clusters of hospitals, as well as in areas where hospitals are farther apart but still loosely clustered.

“The value of this type of analysis is that it looks at how hospitals are connected to each other, not just whether they’re in some pre-defined region that we think is important,” said Fillingim, a professor in the UF College of Dentistry.

While the researchers don’t know what causes the high-scoring clusters, the findings suggest a geographical effect on how people answer the question, which may have implications for U.S. hospitals. In particular, the Affordable Care Act takes survey data into account to determine how hospitals are reimbursed for care involving Medicare patients as part of its value-based incentive payment program.

The UF study suggests these survey answer scores are at least partially influenced by factors that differ by geographic locale, which may bias how a hospital is compensated for care. However, further analysis is needed to determine the factors that affect patient responses.

It’s likely that regional differences in demographics, socioeconomics or sociological characteristics play a part, as well as factors such as competition between hospitals. Whatever the factors may be, it will be important to identify them in the ongoing endeavor to improve pain care, Tighe said.

The findings were published online ahead of print on Feb. 12 in the journal PAIN. The study was supported by a grant from the National Institutes of Health under award number K23GM1026.