For more information on our ongoing response to COVID-19 in Gainesville, Jacksonville and Central Florida, visit our coronavirus website. END_OF_DOCUMENT_TOKEN_TO_BE_REPLACED

Habibeh Khoshbouei's research goals brought her from Iran to the U.S. 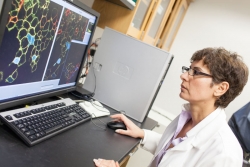 Habibeh Khoshbouei, Ph.D., an associate professor of neuropharmacology in the department of neuroscience, remembers her first day in the United States like it was yesterday.

“I just thought, ‘Oh my.’ Any book, journal or scientific thing that you wanted was right there,” Khoshbouei said, recalling the inconvenience of driving across town to multiple libraries to get what she needed to complete her doctoral thesis in Pharmacy in Iran. “I fell in love with the library before I even knew which department I wanted to go to.”

She barely knew a word of English during her first interview at the university.

“I guess the people who interviewed me realized how passionate I am about really learning and that made the foundation of who I am today,” Khoshbouei said. “I really owe it to people at the department of pharmacology who believed in me.”

But to her colleagues and lifelong mentors, her dedication to science and commitment to her passions has made her into an individual worth admiring.

“I admire her a lot for coming from Iran and leaving her family there because she felt very strongly about having a research career and the same kind of career would not have been possible for her in Iran,” said Nancy Zahniser, Ph.D., a professor of pharmacology at the University of Colorado School of Medicine, who was one of Khoshbouei’s first mentors and friends. “So I think whenever we complain about how difficult it is to get grants or to get papers accepted, she has a different perspective on what difficult situations are.”

Khoshbouei’s research focus is how addictive drugs such as methamphetamine and cocaine influence the brain-dopamine system. Dopamine is one of the chemicals released when humans feel joy, reward or satisfaction. It is released after eating, drinking or having sex, which is why we seek food, water and reproduce, Khoshbouei explained. Dopamine is also important in movement. For example, Parkinson’s disease is associated with decreased dopamine in the brain.

Specifically, she looks at a protein called the dopamine transporter, which she describes as a vacuum cleaner for dopamine in the brain.

“When the dopamine is released, this transporter vacuums it up so that the cycle can continue, which is why you want to eat again,” Khoshbouei said. “The drugs disrupt the function of this vacuum cleaner, which is why when people abuse cocaine, they feel high.”

She hopes to learn more about this process by using techniques such as measuring the neuroactivity of a mouse brain after it is exposed to the drugs systemically. Ultimately her goal is to know in detail how the system works so that in the future, scientists will be able to fix the disruption in addicts.

Reflecting back, Khoshbouei said her proudest professional accomplishment is two-fold. First, she said she has been blessed to gain the respect of outstanding scientists who have helped mold her into who she is today. Second, she said that the research she has done and is currently doing is helping to open up new doors and to provide new questions when it comes to treating addiction.

Lee Limbird, Ph.D., a professor of biochemistry at Fisk University in Nashville, was one of Khoshbouei’s mentors. She said her drive and commitment to both science and family reminded her of herself when she was a budding scientist.

“I think her fearlessness and relentless efforts were going to ensure that she was going to be successful,” Limbird said.