UF Health to resume elective surgeries, procedures on Monday, May 4. For more information on our ongoing response to COVID-19 in Gainesville, Jacksonville and Central Florida, visit our coronavirus website. END_OF_DOCUMENT_TOKEN_TO_BE_REPLACED

Second dean of the UF College of Medicine passes away 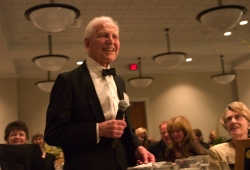 One of the founding leaders of the University of Florida College of Medicine, a man known for the significant strides he made in improving medical education and diversity within the college, has passed away at the age of 95.

Emanuel Suter, M.D., who joined the UF College of Medicine in its founding year as the first chairman of the department of microbiology and who led the college as its second dean, died peacefully in Charlottesville, Va., on Jan. 8.

During his tenure as dean of the college from 1965 to 1972, Suter led the development of what was considered one of the most innovative medical education curriculums of its time. Under his guidance, faculty members from across the entire college all participated in the development of the curriculum, which better integrated the basic scientific concepts students learn in medical school with their clinical training. He also championed diversity and civil rights, developing a recruiting program for minority students and overseeing the acceptance and graduation of the first African-American students in the College of Medicine.

“He created a Camelot,” said Parker A. Small Jr., M.D., a UF College of Medicine professor emeritus of pathology, immunology and laboratory medicine. “He was driven by having some very clear goals, and none of them were personal. He was too committed to trying to improve medical education and improve patient care.”

Born in Basel, Switzerland, Suter came to the United States in 1949 to pursue his research on tuberculosis at the Rockefeller Institute in the lab of renowned scientist René Dubos, whose work led to the discovery of many major antibiotics. A few years later, he joined Harvard University, where he established an experimental educational program that caught the attention of George Harrell, M.D., the first dean of the UF College of Medicine.

Harrell recruited Suter, who was inspired not only by Harrell’s vision but also the opportunities the new college presented. Although he had never heard of the University of Florida, Suter left Harvard in 1956 to become one of the founding members of the College of Medicine faculty.

Aside from building his department, Suter became actively involved in medical education, chairing both the curriculum committee and the medical student admissions committee. When Harrell left UF in 1964, Suter was appointed acting dean and named dean the next year.

“To anyone committed, as we are, to the education of medical students, Dr. Suter was a true inspiration,” said Michael L. Good, M.D., dean of the University of Florida College of Medicine. “He was an exceptional leader who led the College of Medicine to new levels of achievement during his time with us. He will be remembered for his character, his generous spirit and his unwavering commitment to medical education.”As dean, Suter also worked to expand medical education at UF by teaming with leaders at Florida State University, which did not have a medical school at the time. As part of the arrangement, a segment of students would complete their first year of medical school at FSU and then come to Gainesville to finish their training.

Another major accomplishment was the initiation of a program in family and community medicine, which culminated in the creation of a new clinical department, the department of community and family medicine. Suter also was heavily involved in efforts to expand the UF Health Science Center as HSC leaders developed plans for the College of Dentistry and the College of Veterinary Medicine.

After leaving UF in 1972, Suter went on to work for the Association of American Medical Colleges. This was followed by a position with the Veterans Administration at their Continuing Education Center in Washington, D.C., where he planned and organized continuing education symposia to build teamwork among the different rehabilitation related services provided by the VA.

He returned to the University of Florida College of Medicine as a resident educational consultant in 1991 to assist with the college’s re-accreditation efforts and to work with the Office of Educational Affairs. For six years, he worked closely with the curriculum committee to develop a stronger infrastructure for the college’s educational mission.

“He became my No. 1 mentor during those years,” said Robert Watson, M.D., the former senior associate dean for educational affairs in the college who worked closely with Dr. Suter. “I have never met anyone else like him, ever. I have told a thousand people, my goal in life is to be like Manny Suter. He would take an idea, make it better and never take any credit.”

Later, during one of his birthday celebrations, Suter called the time he spent at UF in the 1990s some of the most fulfilling of his professional career.

“That meant a lot to me,” said Watson, who now serves as executive associate dean for administrative affairs at the Florida State University College of Medicine. “Words cannot express the admiration I have for Manny Suter.”

Suter enjoyed his final years at the Westminster Canterbury of the Blue Ridge retirement community in Charlottesville, Va. He leaves behind three children: Bradley Suter and his wife Nancy Burr, of Charlottesville, Va.; Brooke Suter, of Falls Church, Va.; and Jere Suter and his wife, Ruth Edens, and their children Samuel and William Suter, of Houston.