UF Health to resume elective surgeries, procedures on Monday, May 4. For more information on our ongoing response to COVID-19 in Gainesville, Jacksonville and Central Florida, visit our coronavirus website. END_OF_DOCUMENT_TOKEN_TO_BE_REPLACED

Seniors with Alzheimer’s paint works of art for auction 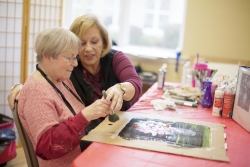 Seniors at Al’z Place spent a week creating art work through the Art Without Boundaries program, and now the community will have a chance to bid for the paintings at the Moonlight & Martinis gala fundraiser on Feb. 1.

Robyn Katz, program director at Al’z Place, a model daycare facility for adults with Alzheimer’s disease or severe memory impairment, said the clients love the program because it is stimulating and fun.

“Everyone loves the gratification they get from doing the paintings and showing them off to their friends,” Katz said.

Art Without Boundaries was founded by Noelle Hammer, an artist from south Florida. She works with Alzheimer’s patients through MnemeTherapy, which uses everyday pleasures such as singing, movement, painting and story-telling in a unique combination to stimulate dramatic changes in the brain.

Clients at Al’z Place have a great response to the painting activity, so Katz invites Hammer back every year.

Each client has the opportunity to paint twice during the week, but the activity isn’t only about being artistic.

“The basis of MnemeTherapy is to get information from the brain, and to give information to the brain,” said Hammer. “What we are doing here isn’t just about painting. It is about doing the painting. It’s about the process.”

Hammer conducts a brief evaluation of each client before each art session. She assesses the stage of dementia, vision impairment and memory decline. Then, she evaluates the client again after the session.

In one particular case, Hammer asked a client named Randy what she saw when looking at a painting of flowers in a vase. Randy was unable to think of the words to describe what she was seeing. She only was able to see pieces of the painting rather than the painting in its full context.

However, after Randy finished her own painting during her MnemeTherapy exercise, Hammer asked Randy to look at the same picture she studied before the session and describe what she saw. Randy was able to verbalize that she was looking at a vase of flowers.

“At the ends of these sessions, we often see such a change,” said Katz. “People become more vocal. Words come to them more easily.”

Once Randy finished her painting of flowers and trees and a path through a garden gate, tears welled up in her eyes. She explained that she was crying because she was happy and surprised that she could paint something so pretty. She named the painting “My Play Place.”

Randy’s painting, and many others, will be on display and available for purchase at the Moonlight & Martinis gala, a fundraiser to support ElderCare of Alachua County which funds Al’z Place. If you would like more information about the event, visit moonlightandmartinis.org.