For more information on our ongoing response to COVID-19 in Gainesville, Jacksonville and Central Florida, visit our coronavirus website. END_OF_DOCUMENT_TOKEN_TO_BE_REPLACED

Tale of the tape 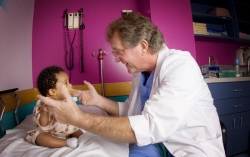 Imagine having to guess a seriously injured child’s weight in a matter of seconds and then perform a series of math formulas in order to give the child the right dose of medicine.

Move one decimal point in the wrong direction, take too long with your math or guess the wrong weight and there’s a strong chance the child will die.

Robert Luten, M.D., has one word for that scenario: disaster.

Unfortunately, the UF College of Medicine – Jacksonville pediatric emergency medicine professor remembers facing that kind of pressure many times early in his career. The math problems were easy to botch in the chaos of a medical emergency. In addition, since children require such small amounts of medicine, a correct dose and a dose 10 times too high could fit in the same syringe, making it difficult to spot an error. And most children were taken to emergency rooms where doctors rarely treated children. It was a system set up for failure. Good doctors, nurses and paramedics made terrible mistakes in the rush to save a child’s life.

In the mid-1980s, Luten decided to do something about it.

He came up with a chart that bypassed a lot of the math, showing the dosage amounts for children and emergency equipment based on age and weight. The only problem: Doctors would still have to guess a child’s weight and they were wrong as often as they were right.

Then another physician, James Broselow, M.D., presented his own idea to the American Academy of Pediatrics Pediatric Advanced Life Support committee: a “measuring” tape system. The Broselow Tape, as it would later be known, could be placed next to a child to determine height. Luten, who was a member of the committee, thought the idea was ingenious. The doctors decided to work as a team, and nearly three decades later, the Broselow-Luten System has saved children’s lives all over the world.

“When we created it, we both knew it was the simplest possible solution to one of the most difficult problems people had,” he said. “Whenever we showed it to someone, they didn’t want to give it back.”

The color-coded tape can be found in most emergency rooms and aboard most ambulances. Aside from displaying a child’s estimated weight, the tape includes charts listing key medicine dosage amounts and equipment sizes required for a child in each category.

The tape was just the beginning of Broselow and Luten’s ongoing quest to improve pediatric emergency medicine. They later created the Artemis system, a software suite that can be used not only to determine what medicine or equipment a child needs, but also to order and track what is used.

There is one factor that has had an increasing impact on the system: childhood obesity. Children who are severely overweight do not always fall within the correct weight zone for their height. The good news? Luten said not all medicines should be administered based on actual weight. Many are dosed based on ideal weight, which will not change regardless of obesity. The size of equipment needed for the child also remains the same.

“Your trachea is the same size regardless of weight,” he said.

Now that the tape is available to medical personnel all over the world, Luten said he expects it to be the standard for a very long time.

“Ultimately, it will continue to be around because it’s so easy to use,” he said.