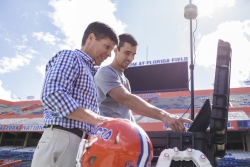 In football, a tackle can supply 100 G’s of force or more, well above the amount that can cause a concussion and more than 10 times the force of an F-16 jet roll maneuver. Now, University of Florida Health researchers are using the helmets of Gator football players to help measure the force of on-field hits as part of ongoing efforts to better understand and prevent concussions and treat them before they cause lasting damage.

With a grant from Banyan Biomarkers and matching funds from the Florida High Tech Corridor Council — together totaling $574,910 — UF researchers have purchased the Head Impact Telemetry System, or HITS, to measure the impact, duration and location of each hit football players take in real-time through sensors placed in their helmets.

Led by James Clugston, M.D., a University Athletic Association team physician at UF and an assistant professor of community health and family medicine, the UF researchers will correlate the data they collect from the sensors with additional data from blood and magnetic resonance imaging tests. This will allow researchers to get a complete picture of concussions when they occur in athletes.

“We are still trying to find objective ways to detect concussions and help us know when someone is recovered so they can return to play,” Clugston said. “We wanted to get a measure of the amount of force that athletes were experiencing. With this system, we will get real-time data to assess the severity of the impact.”

The researchers began using the system at the start of the current football season in August. They are measuring hits in 30 football players on the UF team.

In addition to helping the researchers understand more about the forces at work in concussions, the data collected from the sensors also can help individual players reduce their own risk of injury. For example, the system has already allowed the researchers to see that some players were putting their heads down during tackles, which is dangerous and increases their risk of concussion and cervical spine injury. The coaching staff was alerted and then able to talk to the players so they could correct the behavior.

The researchers also plan to use the system to track the number of hits players receive over time.

“You may see that a player has had many hits in a week, season or career,” Clugston said. “Some studies show that the risk of concussion goes up based on how many hits a player received in the preceding days as well as how many concussions they may have had in the past.”

According to a 2013 Institute of Medicine and National Research Council report, concussions occurred in college athletes approximately every 4.3 out of 10,000 times they were on the field, either to practice or play.

This is the fourth year Clugston’s team has received funding from Banyan Biomarkers to test players’ blood samples for proteins in blood that are linked to brain injury. The researchers collect and test blood samples from players after concussions and also after normal play to ensure the act of playing itself does not cause these telltale proteins to increase. Last year the researchers began incorporating advanced MRI testing as part of these efforts with support from the department of radiology and direct guidance from Keith Peters, M.D., an associate professor of neuroradiology. HITS will help them expand and better understand this data, Clugston said.

“It helps us track over time which athletes have sustained the most impact and whether that matches the blood biomarkers we are testing and the imaging results,” Clugston said. “HITS helps us make sense of that other data. Hopefully, these efforts can make us better at diagnosing and managing concussions and ultimately increase player safety.”