An anesthesia and pain management resident with the University of Florida College of Veterinary Medicine has received national recognition for her research, which identifies the CPR chest compression technique that causes the most muscle fatigue. 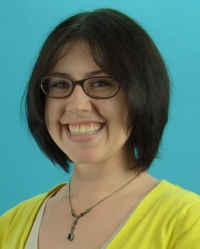 Bonnie Gatson, D.V.M., received the American College of Veterinary Anesthesia and Analgesia’s 2014 Smith Medical/SurgiVet Resident Abstract award. The award is given for the best abstract submitted to the group’s annual conference, held Sept. 9-14 in Indianapolis.

She completed the project with her mentor, Andre Shih, D.V.M., an associate professor of anesthesiology and pain management at the college.

As the rescuer exerts him or herself, the number of effective chest compressions declines over time, which could alter the chances of patient survival, she said.

Very little research has been performed on the effect rescuer fatigue has on the quality of chest compressions, and even less is known regarding its effect on human neonatal patients and in smaller veterinary patients, Gatson said.

“Using a variety of tools to assess muscle fatigue, including thermal camera imaging, we determined that muscle fatigue occurs sooner using a technique where the rescuer uses the thumbs of both hands to compress the chest, compared to a technique where the rescuer uses two fingers of a single hand to compress the chest," she said.

The results of this study are important for determining how often rescuers need to be interchanged during CPR, Gatson added.

However, she added that more research in this area is needed before any definitive conclusions can be made.

“We hope that our study is a step in the right direction in order to improve the chances of survival for pediatric and veterinary patients that require CPR,” Gatson said.

Gatson also received the 2014 ACVAA Foundation Resident Scholarship Grant, which was awarded based on merit.

Sarah Carey, M.A., A.P.R., is director of public relations at the University of Florida College of Veterinary Medicine, a job she has held since 1990. Formerly, she was editor of... END_OF_DOCUMENT_TOKEN_TO_BE_REPLACED